Safe Haven From The Heat

Home/Safe Haven From The Heat
Previous Next

Safe Haven From The Heat

I know winter is supposed to be coming soon, but the weather here sure isn’t showing any sign of it. It is hot, hotter than when we first got here, the sweat-running-down-the-side-of-your-face-while-you-stand-in-the-shade kind of hot. We feel the weight of it as early as 9 in the morning when we are bring Arias to school. This kind of heat makes motivation to do anything work related hard to come by. Instead we hit up the beach, once, if not twice a day to cool off and also to wash off all the sweat that has accumulated on us prior to that point in the day. I am not complaining, actually I am, it is slightly uncomfortable, but I know there are worse things.
I accept being hot when out and about, but your home, your boat, is supposed to be your safe haven from this oppressive warmth. We do not have AC on Necesse. Instead we have found two methods to help the breeze circulate through our boat creating the cooling for our oasis.
When we refit the boat we installed four 747/757 Caframo fans in strategic spots to give us the most air possible, pointing directly at where we spend the most time, the couches and the beds. We had tried another model of Caframo fan first but thought they didn’t put out as much air as the ones mentioned above. We have had to replace a few of them since aboard (3 years now), one died, and two became extremely noisy. We have also had the “noisy” fan issue with some of our newer ones but  Caframo has great customer service and when we wrote to them about our issues they replaced the defective fans. We still have one that is a little loud but if it is kept on the lower setting it runs smoothly. We found that the best spot to buy these fans was from Defender. They were at least half the price on this website compared to some other sites that list them for ridiculously expensive.
Our second stay cool method were the windscoops that Eben made for us. They made a huge difference in the airflow in the boat. Before we would only notice the wind if it was blowing outside since our two main hatches in the salon open to the sides catching no air whatsoever. Now even on calmer days those scoops catch it and push it right into our salon, and on windier days it is sometimes hard to keep anything from flying off the table. Eben had looked at many different designs for windscoops online as well as going around the harbour and checking out what other people had done and in the end he created his own design. He made them out of old sail material that we had, and to the size of our liking so they are not huge and obstructing the view but are big enough to serve their purpose.
And if all else fails there is always the beach, where you will more often than not find us in the early morning when winds are slow, sitting at the waters edge playing with the girls.

The fans (top left and right of the pic) aimed directly at our seating area and towards the galley. 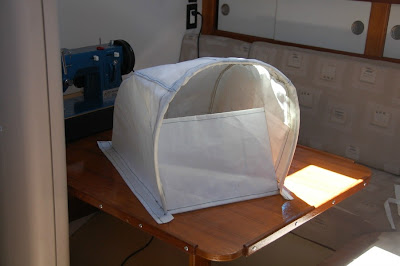 The windscoops Eben made, the inner flap is to let air in but not the rain. We can keep the hatches open when it rains.

The girls don’t seem to mind being sweaty most of the day, I am the one obsessively wiping them off.