Our Struggles With School: It’s Not Going Awesome

Home/Our Struggles With School: It’s Not Going Awesome
Previous Next

Our Struggles With School: It’s Not Going Awesome 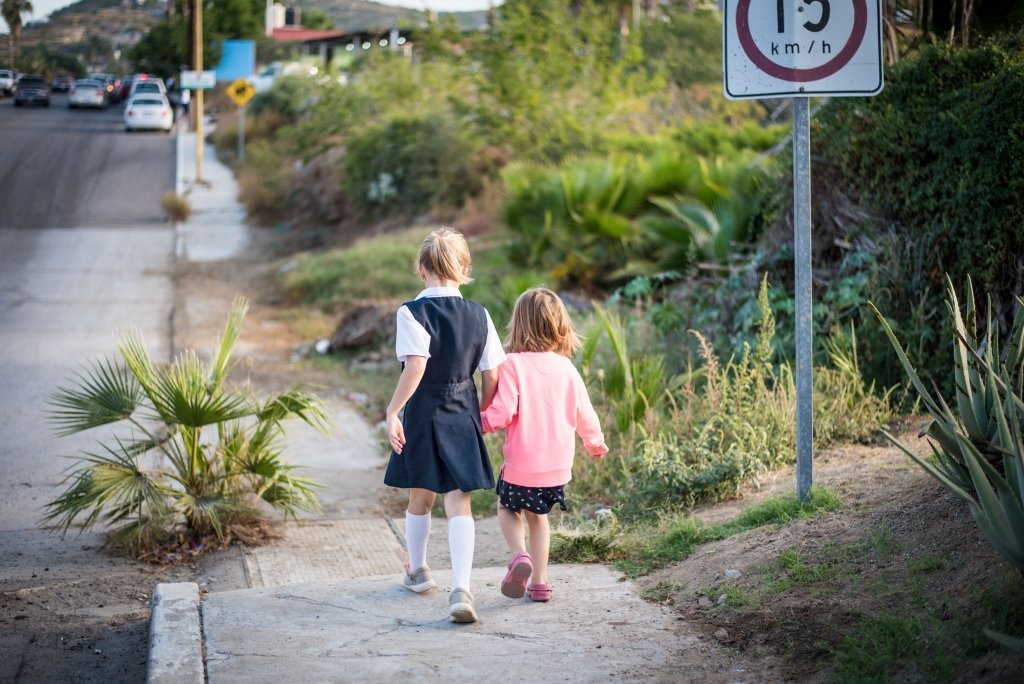 Up to this point we have always homeschooled our girls. It’s the way our travelling lifestyle led us. I always dreamed of the days we’d be able to enrol the girls, “oh the projects I will accomplish with all that free time”. Or so I thought! Instead, having the girls in school has brought on a whole slew of struggles.

We looked forward to the social interactions. To the making of “BFF”s and the playdates. I looked forward to someone else being their teacher. And here in Mexico we got the added bonus of the girls being immersed in a second language at school.

In the three months the girls have been in school we have seen many benefits, but also MANY struggles that have brought us to some serious questioning and wondering if we are doing right by our girls. Mostly for Arias. 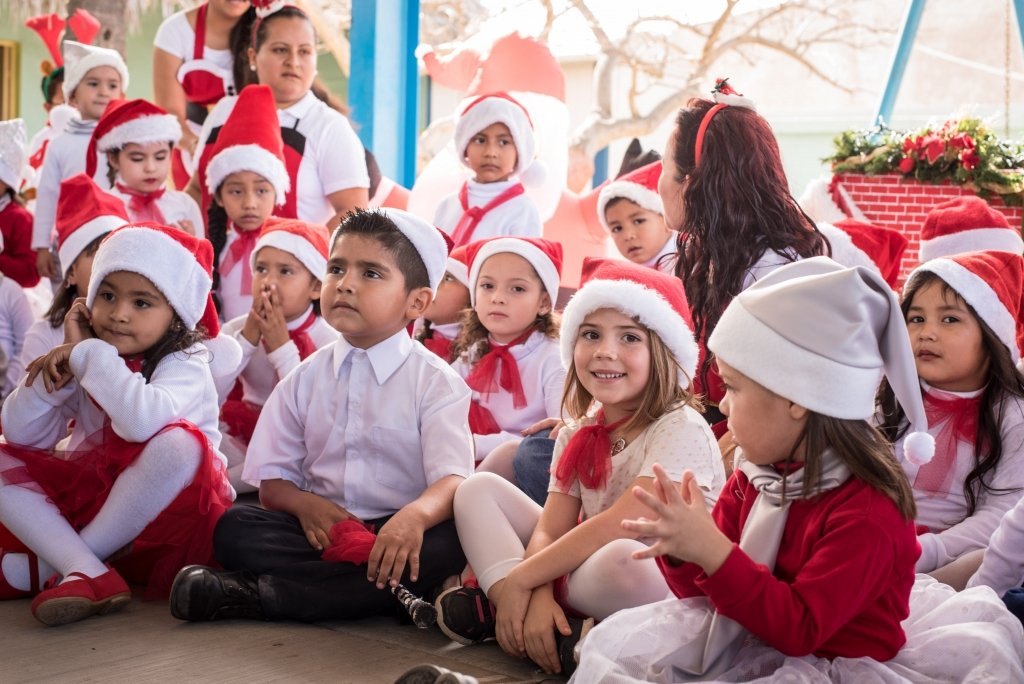 During her first couple of weeks I almost started to cry as I secretly watched her through the school fence. She would arrive at school, put her backpack on her little hook, and then go stand alone while all the other kids played. She told me that the kids didn’t understand her and would tell her things like “no amiga”. I had to hold back the tears.

But with time things have gotten better. Her Spanish has gotten better. And she has made friends that are ok with basic conversation. She doesn’t come home heartbroken anymore.

Ellia is in Kindergarten, with a teacher that speaks no English. The benefit she has is all the content they are covering she has covered before in homeschooling, just in English. So now she is basically reviewing it all in Spanish. Also a lot of her class learning is hands-on and play oriented. She is doing really well. 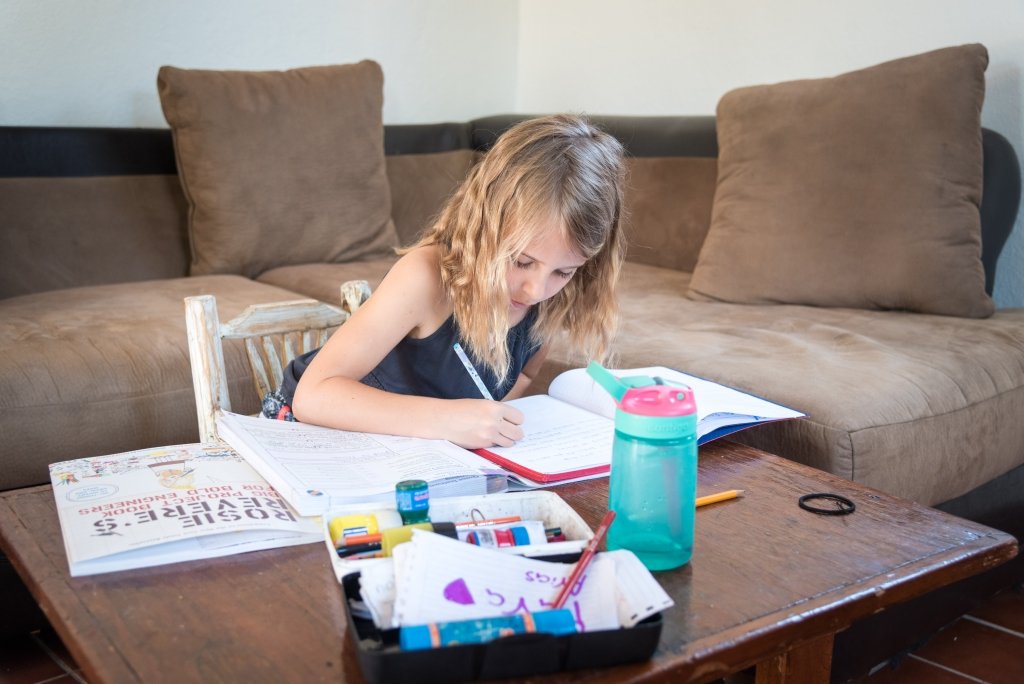 Arias is older. She is in grade 3. Things are harder for her, both academically and socially. This is where my heartache lies.

Arias is an overachiever. She always has been. It’s extremely strange for me to be raising an 8-year-old that stresses over school. She gets anxious about whether she is doing things “perfect”. She constantly is striving for perfection and puts a lot of pressure on herself.

Her teacher has called me because she is uncontrollably crying in class. The class was having a test and she couldn’t understand, and didn’t have the time to write down the oral questions in Spanish. She was worried he would be angry, and she was worried because the test was peer-corrected. “One of my friends will see how bad I did.”

No matter how many times we have told her “we don’t care how you do academically in school”, she still stresses. “We have enrolled you there to learn Spanish and make friends” she still worries.

I am homeschooling her at home. This is where her grades matter. But not at school. The brick and mortar school is “extra”. Of course we want her to follow along and understand what is being taught in school, but whether she continues on to the 4th grade, that is in my homeschooling hands.

How do I help my 8-year-old with school anxiety!?

I can’t believe the amount of homework she gets. Her class receives a lot of homework. And for us it takes double the amount of time to do it. Since it is in Spanish I sit with her and work through all her work (except math). First we read it in Spanish (to work on understanding, listening, and pronunciation) and translate what we don’t understand into English. Then we work out the answer and translate it back into Spanish so she can write it out.

It’s a process. We’re talking about 2 hours a night, about 3 nights a week.

On top of her school homework, the poor kid also has homeschooling work to do with me. We were doing this for English, Math, Science, and Social subjects. But because of the size of the home-workload she was doing I have found a way to scale it down. Now we focus on English at home, and make sure she is understanding what is going on in those other subjects that are being taught in her school.

I feel really bad for her. It’s a big workload for a kid. It’s all in a foreign language. The stress she puts on herself. The amount that she has to do. I don’t want her to resent learning, and I am starting to see her cringe and complain when it is time to sit and do homework. Where does she fit in fun and family time into her after school time?

Grade 3 girls issues. It makes my brain (and heart) hurt. Arias has fallen in with the “in” crowd. But that’s not where we want her to be, for several reasons.

First, she is not speaking as much Spanish as we had hoped because some of her classmates speak English. So, naturally, she hangs out with them. This is hindering her, because the slow learning of Spanish adds to her stress level about school.

Second, since being in school, I have actually been “called in” to the school because of her behaviour. She is picking up bad behaviour. The teacher, who is extremely attentive told me, “this isn’t her. She wasn’t like this when she started school. Now she acts like some of her troublesome friends.”

We have had this issue before. She has a strong character, and can take things to the extreme. She plays hard and doesn’t always notice when it crosses a line. (Is that what we get for letting her roughhouse!?) Being very smart she knows how to get things to go her way. We have discussed this with her. She needs to harness these powers to be a positive leader, not to be the leader of “mean girls”.

We had some pretty intense conversations with her about this. Strongly encouraging her to work on her behaviour, and that if she chooses to continue being friends with said classmates that positive behaviour is expected. “You can be friends with someone without picking up their negative traits. Maybe your good behaviour will rub off on them.” Fingers crossed.

Not only was she dishing it out, but she was also receiving it. Remember the days where one day your best friend is your best friend and the next they are not; and then they are again, and then they’re not. That’s where she is at. It’s hard sitting with her as she cries because her friend told her in plain English “I don’t like you. You’re not my friend”. Or the more physical, of her coming home with bruises because “that boy” in class keeps pinching her and she doesn’t know how to communicate to him to stop! Arias is strong, but she also has a huge heart and takes things very personally. Words, and pinching, hurt her deeply.

We keep reminding ourselves, this is part of the “social” aspects that we wanted them to learn in school. To learn how to deal with and overcome it. But then we started questioning even that. Do we really need our kid to learn to sit in a classroom with jerks for the sake of the personal growth? Do we need to have our kid act like jerk because that’s what the cool-kids do?  Is the added stress, workload, and social junk she is dealing with worth it? 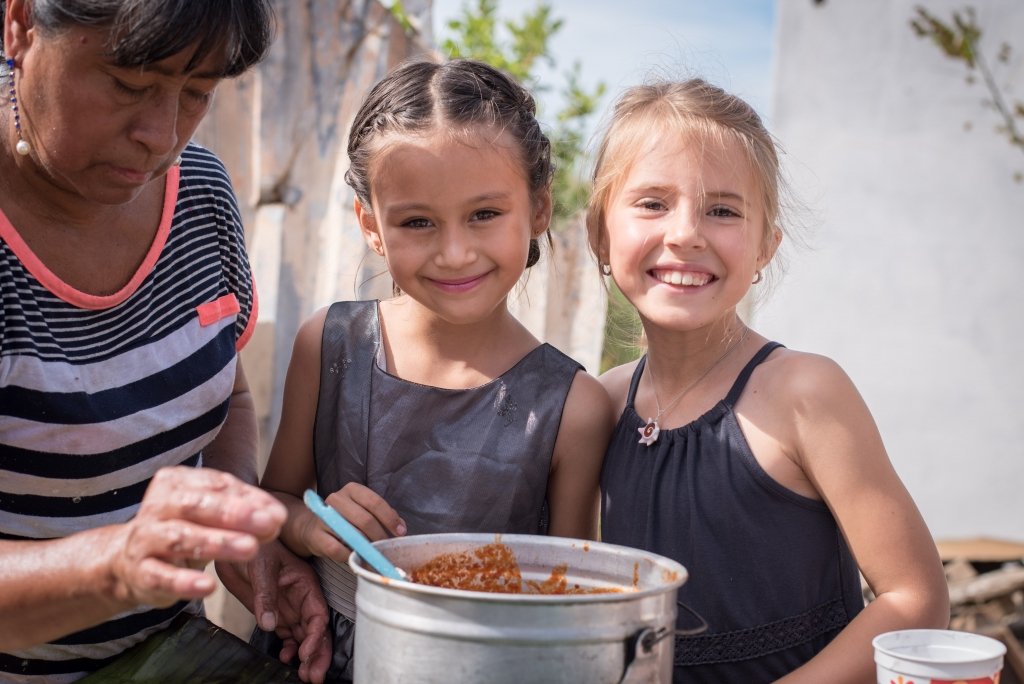 This is one of her “good role model” friends. We love this little girl.

We haven’t come up with any solid plans of attack yet. I have reduced her homeschooling workload and we’re using her school lessons as part of our home-education. We also have been encouraging playdates with good role models, to try to help the social side of things.

– Pull her out of school and go back to homeschooling? Or is that giving up. We don’t want to teach that either.

– She’s only been there 3 months, do we wait it out? She is still finding her place. And her teacher is also adjusting to her needs. The next test she will do orally, since written Spanish takes her longer. He has moved the pinching boy to another work table. And he keeps in close contact with me via Whatsapp so I know how she is doing in class.

– Enrol her in a Spanish intensive course? By understanding Spanish better she would stress less about class time. But that would be even more work for her right now.

Things are not horrible right now. But they could be better.

I AM OPEN TO ANY ADVICE. THIS SCHOOL THING IS TOTALLY NEW FOR US!

I wish I could write that things are going amazingly on the school front. For Ellia they are. But for Arias we are struggling. Every day we plug away at her homework. Every day we encourage her in good behaviour. We are present and involved. We want to protect her, but we don’t want to shelter her. She can excel without her stressing. Really, we just want this to be a positive experience for her.