Beauty In A Can and Breaking Bad Habits

Home/Beauty In A Can and Breaking Bad Habits
Previous Next

Beauty In A Can and Breaking Bad Habits

Today was both self-serving as well as educationally pertinent.
I was raised bilingual, French and English, and from the start had planned on passing that gift down to our children. Laziness, however, took ahold of me, or rather bad habit. I got in the habit of speaking to the girls in English and since then it has always required extra effort to speak to them in their other mother tongue. Once i got into that flow I was content in making sure that Arias was excelling in English and put a second language on the back burner, and that’s where it was left.
I am always impressed by other families who’s children are multilingual and kicked myself for not taking more initiative on that and pushing myself to educate ours more. I don’t know what the exact switch was (we did meet another multi lingual family just last weekend) but I decided that NOW I will make more of an effort to teach the girls French, for real. Or I will have Eben kick me in the pants this time around if I fail.
The problem with bad habits is that they feel so impossible to break. Prior to this, the days that I told myself “today is going to be a French day” I would find myself having unknowingly switched back to English by midday. So for this to stick I knew that I needed something visual to keep reminding me throughout the day of which language I was speaking; a hair elastic around the wrist, a drawing on my hand, or the winner . . . a French manicure. Since my preteen years I have painted my nails maybe five times, at the most. It always seemed like something that required way too much time and effort, to put on and remove, to be bothered with. It was simply too well-kept for my busy self. Having well manicured nails will absolutely be an eye-catching out-of-the-norm reminder to see on my own body.
Rather than painting my own nails, which obviously would have been a hack job, or getting Eben to do them (which would have looked much nicer than what I could have done myself) I went the pampered, self-serving route of finding a nail salon. Now to say nail salon here in Luperon is very overrated. Around town you will find a few bare rooms with a single table surrounded by plastic chairs and rows of nail polish nearby, these are their salons. The manicurist we chose is one we walk by almost daily. This lady rents out a shipping container by the town square, (beauty in a can), swings open the doors and she is open for business. For a mere 50 pesos she cleaned, filed, and painted my nails, and fixed two of them 30 minutes later (as I said I am not a nail polish wearing expert, I managed to wreck two nails real fast). I went for the simple French manicure, with a small stripe of silver bling to help catch my eye, I figured start off easy so as to not send my brain into narcissistic overload. I have found it a bit difficult operating with painted nails, I am so afraid to wreck them that I second guess any work that would require me to use my hands and often catch myself sitting with my hands out in an awkward mannequin style so they don’t accidentally knock into something, not too practical on a boat.
It worked, I managed to go the rest of the day speaking mostly French to the girls. There were a few translations here and there, but mainly I stuck to the basics. It also brought flashbacks of the days when I was teaching english in Thailand (where they wanted you to teach English speaking only english, no Thai). Those days were full of me miming, drawing, pointing, and making a huge fool of myself to get the point across without having to switch languages. That was me today, using all of my skills to get the message understood, full immersion. We figured I can talk French to the girls, Eben can cover the English (and the French as well, of course, if he wants), and Dona, Arias’ school teacher, and all the locals, will have the Spanish covered. I hope this sticks so that may children can become multilingual, and also because I am starting to like the look of bling-y nails, I just have to get used to operating normally with them. 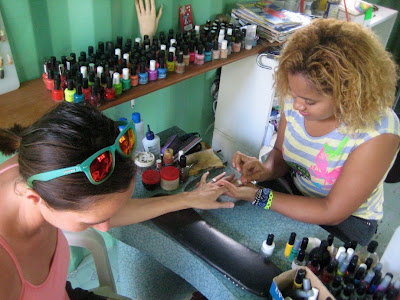 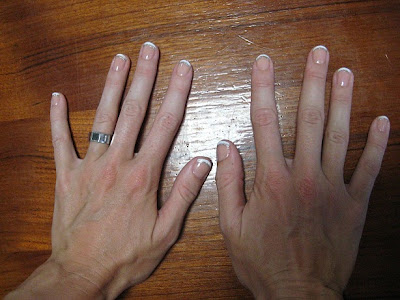