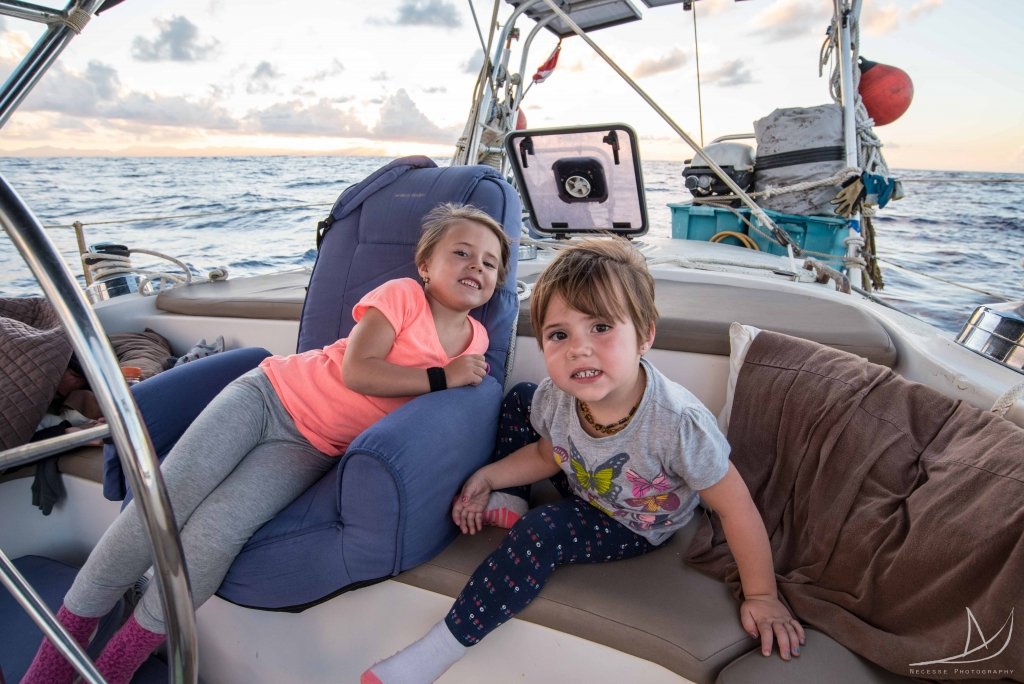 When you throw little ones on to a boat, a parents’ awareness level immediately goes up. Not only do kids already walk like drunken sailors when they are on flat ground, but then put them in an environment that is constantly moving and you start seeing every part of a sailboat as a potential hazard. But it doesn’t have to be that way.

With a few simple modifications most sailboats can be “kid-proofed”. They can even become kid-friendly environments!

Not all boat modifications have to revolve around safety either. We made some adjustments to our boat just so that I could relax a little more knowing my sea-monkeys could get around without my assistance. I love my kids. But I don’t want to be following them around, helping them with all their short-legged issues.

Parents need a little freedom too, so go ahead and modify the heck out of your boat. Even if it becomes less “boat like”. If it means you will enjoy your cruising life more, do it.

Buying Necesse at a pretty bare-boned state meant we could do whatever our hearts desired to her. And being that when we first moved on to her we had one infant and I was hugely pregnant with baby number two, our boat was built up to be the best play park ever for our girls. It doesn’t have to be a hard endeavour. Just decide what it is that may give you a little peace of mind and make it happen.

The initial hard work will pay off real quick. 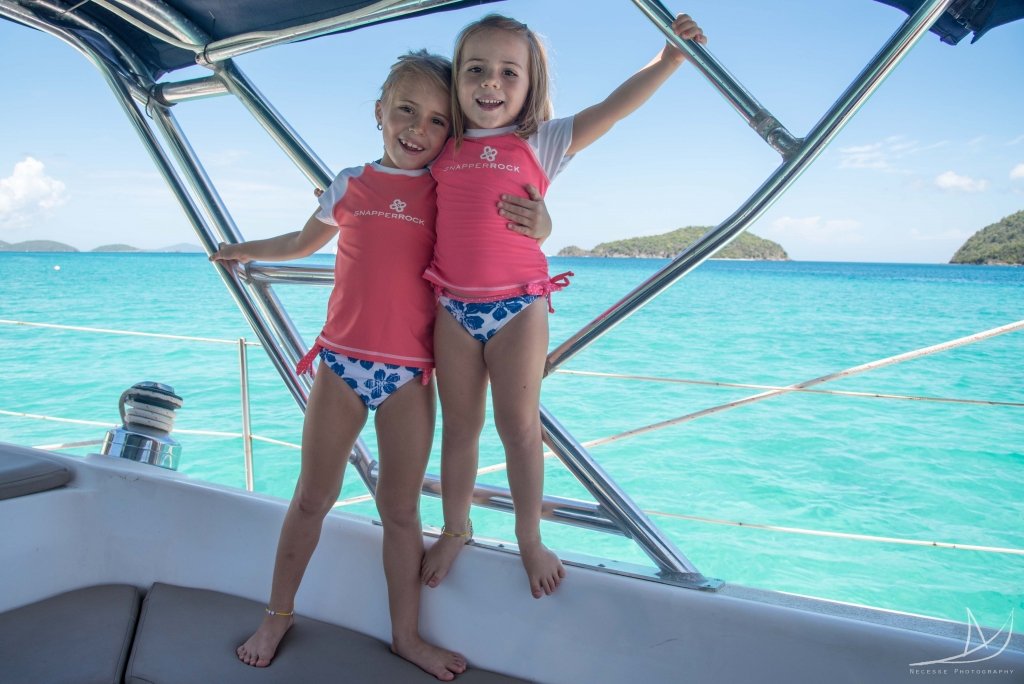 -Most family boats can be spotted from afar because their entire lifeline-to-toerail is covered in netting. It’s a smart idea. If your kids are going to be running around on deck, it’s just one less way that they could slip out and sink to the depths of the sea. They also serve as a great way from losing a ton of toys overboard. It’s like the entire boat becomes a goalie net…for kids and toys.

We never did it. I had full intentions on installing it. We even had all the netting aboard! But the process of putting it up seemed like a bit of a headache, and as time wore on our girls got bigger and didn’t need it anymore. I missed my window!

-For us, it all started with a bunkbed. We loved co-sleeping with our girls. I did anyways. Eben felt he didn’t have as much bed real estate as he would’ve liked. Co-sleeping worked for us. That was until my prego belly got too big, and we knew there was no way we would even consider co-sleeping with two babies! Boat beds are only so big. So we decided to transition Arias. Before sending her off to the front vberth of the boat, which seems like miles away from your parents when you are 2, we built her a bunk in our aft.

No we are not completely crazy attached parents who won’t let our kid out of our sight. We had good reasoning. At the time we had our cousin Noah living with us, and as much as he loves Arias, bunking with a two-year old that just got kicked out of her co-sleeping parents’ bed, may not be the most fun bachelor experience. That and we have a lot of guests roll through here, so an extra kid bed was not a bad idea.

Eben and his cousin Noah put their carpentry skills to work and built the bed to run perpendicular to ours. Basically she would sleep raised up over our feet, and we would use the under section as extra storage.

Extra storage and an extra bed!! Bunk bed for the win!

Although neither of our girls use the bunk bed now, it was still a great modification since it now serves as extra storage space, and a perfect spot to set the laptop on for our almost nightly movie watching. Also when guests come over we often squish one of the girls back up into that space! 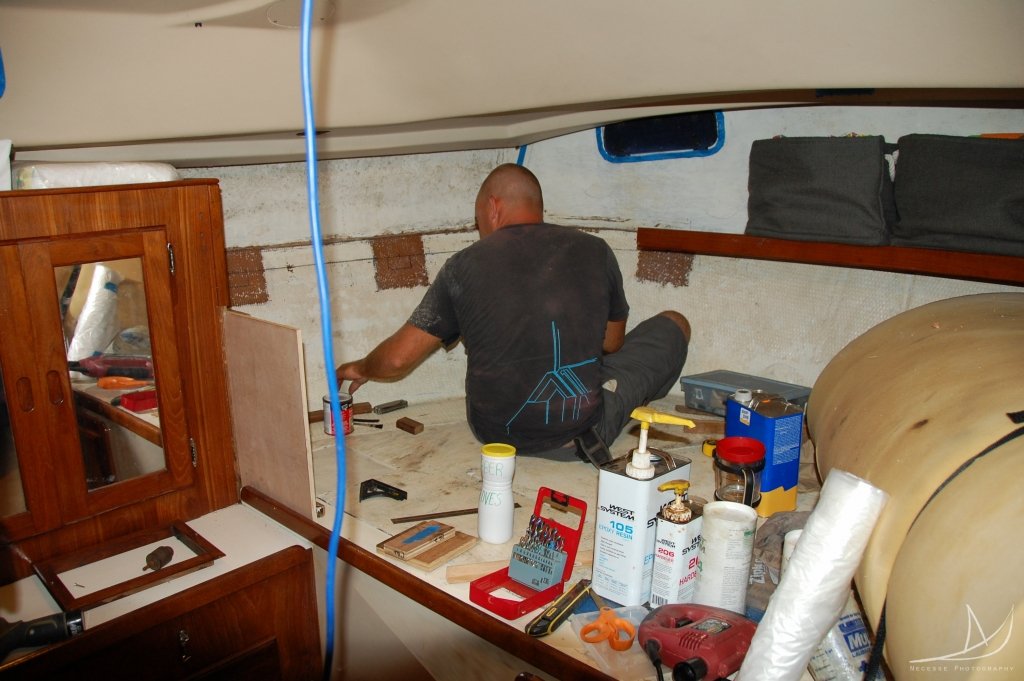 Eben working at fiberglassing in the supports for the bunk bed

–Lee cloths aren’t just for sail racers. They are for parents with “active-sleeping” kids too. I don’t know what your kids look like when they are supposed to be sleeping, but ours cover some ground. The girls often end up laying in every which direction, entangled in one another. They wriggle and re-enacting whatever their dreams are showing them that evening.

It has happened on too many occasions that we will be sound asleep and hear a loud thump, followed by high pitch screaming. And we know exactly what it means, one of the two has rolled out of the bed, again! Lee cloths to the rescue!

Eben had originally sewn/built the lee cloths for me as a place to trap the kids when I needed kid-free hands. Or when I just needed a little peace. He built them tall enough that our girls could not scale them, and used a strong enough bar that if they were to hang off of them the bar wouldn’t snap in half and cause some other weird injury. They were great for this purpose, until Arias was old enough to figure out how to undo the latches. But at that point, she was obviously too old and smart to keep contained!

Instead of a playpen (aka baby prison) our lee clothes now just serve the purpose of giving us adults a good nights sleep knowing that our girls cannot slide out of bed and use the door frame as a landing pad. In my mind that is totally worth it. 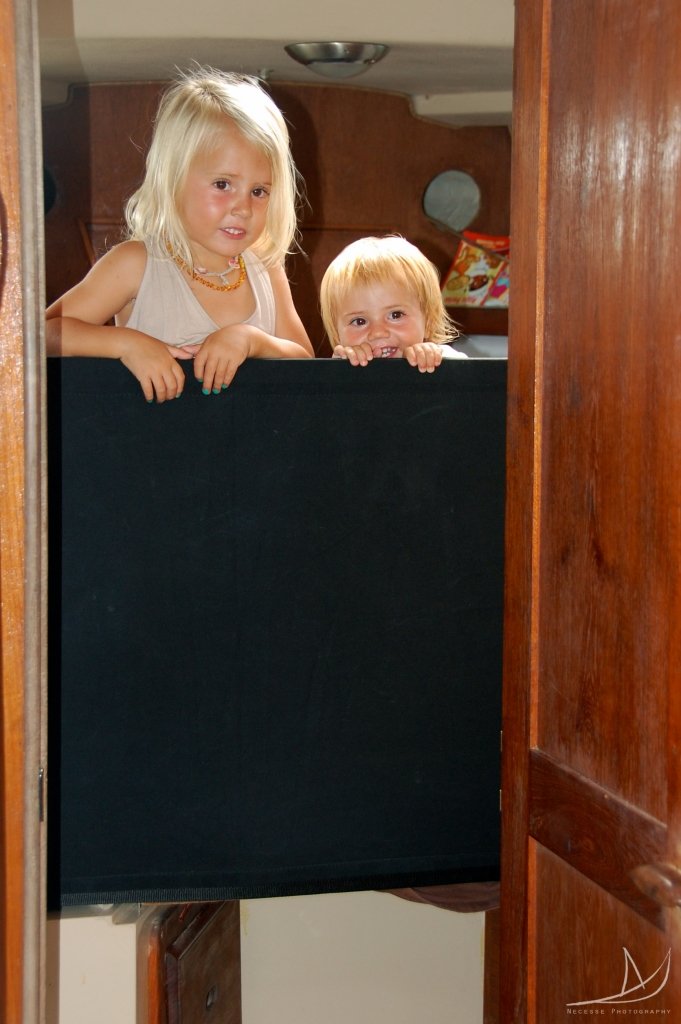 All cute and stuck in one place! 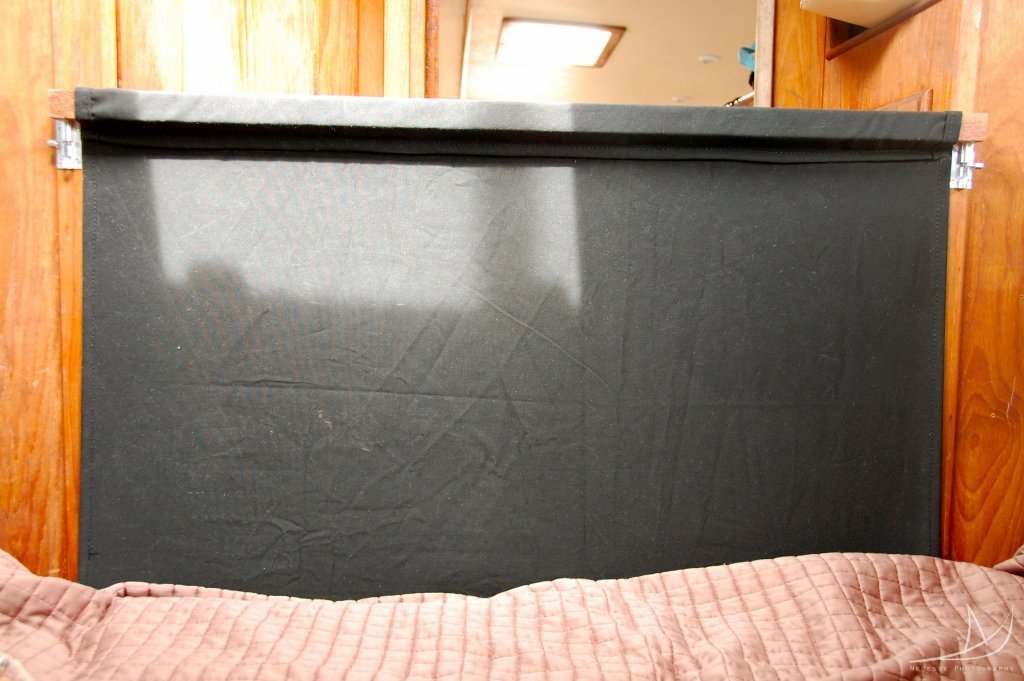 Perfect for keeping babies in one place

–The purple stool, the best ten dollars ever spent. Having our minis running around the boat at such a young age meant that they were too darn short to be able to safely climb up on anything. That may seem comforting, but oh no. It’s quite the opposite. Instead of just giving up on something because it was height-challenging, instead they’d find dangerous ways to climb up. They would turn into free-climbers and use every ledge that their tiny toes could push-off of to try to ascend things like our couch or their bed. Not always to their success.

To save ourselves money on bandaids we got the girls this little purple stool for Christmas.

Ends up it was a gift for ourselves. No longer were we hearing “MAMA!!!!” every few minutes when they wanted to mount something, we would just see them walk over, pick up their stool, and carry it to their newest play spot. They could now safely reach their bed, the couch, the toilet, etc. We have had a few digits pinched in the folding and unfolding of the stool, but those injuries are far less common than the ones we were having from climbing mishaps and frustrations. 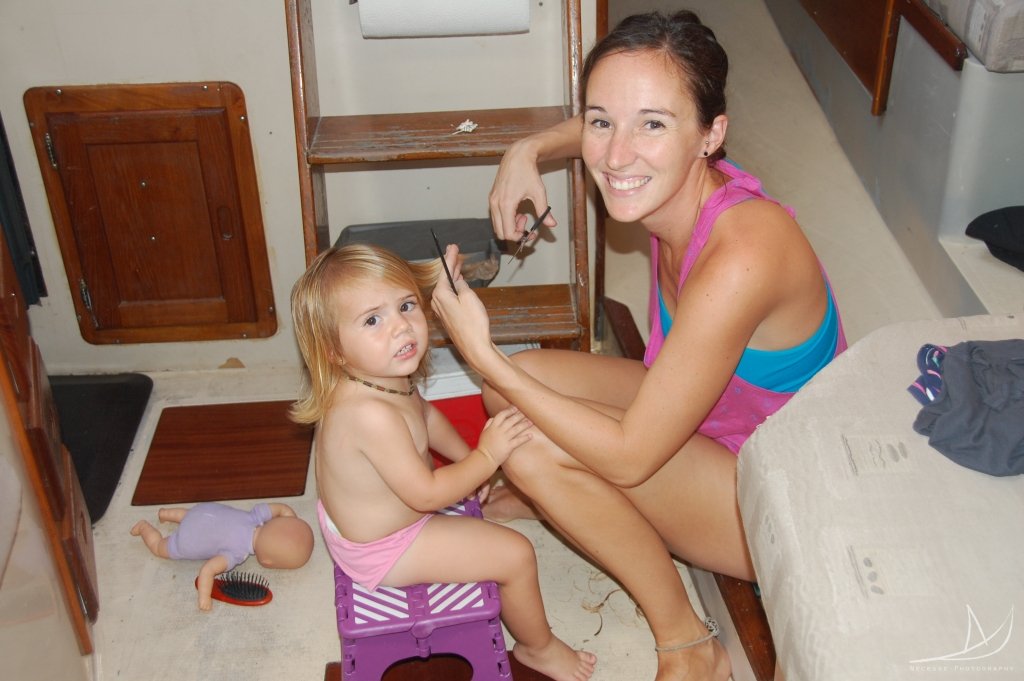 I discovered the purple stool is also great as a hair dressing station.

-Trying to teach a toddler to keep their food on their plate rather than all over the settee is like trying to teach a drooly pooch to keep his slobber to himself. No matter what, you end up with dirty marks all over your beautiful cushions. So no point getting our panties in a knot over it, we found a solution.

Our friends thought we were crazy when we chose a sandy/beige color to redo our cushions. “With two kids those won’t last a year!” But we had a plan. We implemented the “dirty girl towel”. We took one of my handy turkish towels and set it over the cushion the girls sit on to eat. You could use a towel or a painter’s drop cloth, depending on how messy your kids are.

With this simple step they can fidget, and goober, and move, like kids do. And we don’t have to stress about the cost of replacing our settee cushions! After a few meals, when it gets gunked up enough, throw it in the wash and repeat. 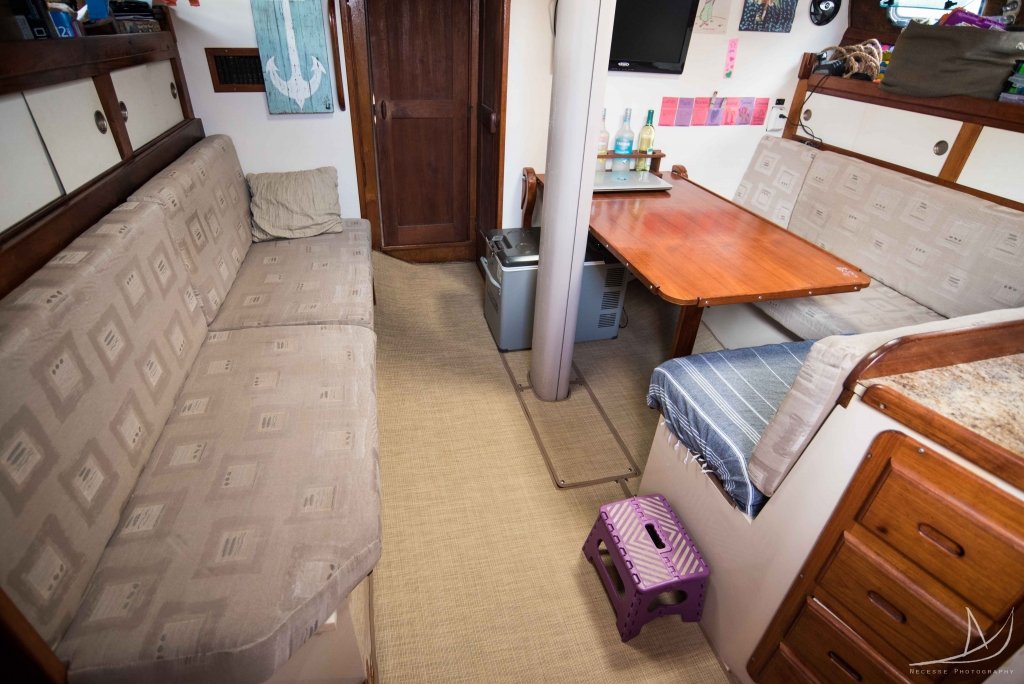 -Kids seem to innately know that parents need sleep to function properly and they will do everything in their power to wake up at freakishly early hours. I am not much of a morning person. I am not horrible compared to some, but without a solid 9 hours of rest behind me I may seem like a bit of a zombie in the mornings. Not conducive to caring for children. So to stop our girls for waking up with the sun we made one super simple modification, curtains. Dark curtains.

Our curtains are double layered, to let in as little sun as possible. We don’t want our girls figuring out it is daytime until we are ready for them.

Not just the curtains have saved our sleeping routine. We also found this marvellous, battery operated, clock. The OK TO WAKE. The parents set a time on the clock when it is ok for the kids to get up, and when that time rolls around the clock lights up green. No alarms that may wake them up in case they felt the need to sleep in one morning. But also no confusion of reading numbers (time) with groggy eyes. If they open their eyes and the clock is green they can get up, if not, not a peep, back to sleep. It has made much happier parents of us. 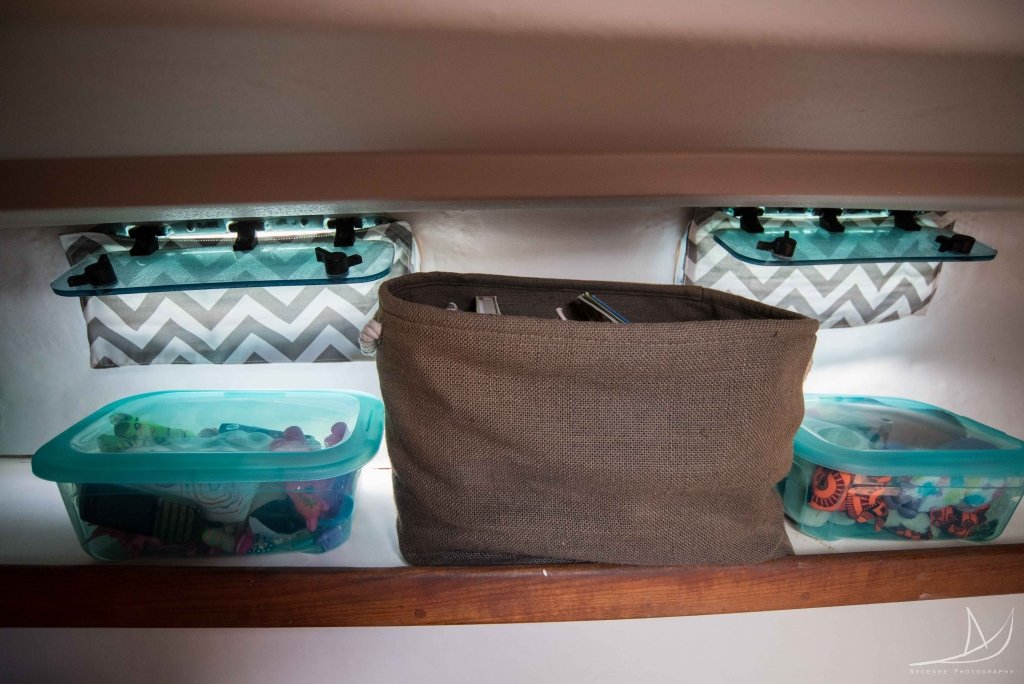 The curtains Eben made, and the bins I am going to talk about below.

-Lastly, if you are going to want your kids to sit still for any point in time they are going to need some toys. Our boat storage space is about 45% kids’ stuff. It helps. You can be as minimalist as you want but just keep in mind that you may be trading off having extra storage for yourself with a little bit of your sanity.

What would you prefer, having more storage for your canned goods and be chasing after your kids all day? Or giving the kids that space to fill with toys that aren’t too big but that can keep them happy for 15 minute increments? I will take 15 minutes of calm any day.

But I like having a clean boat, so to be able to have a kid-boat full of toys and still have it looking clean I have found that the key is BINS, BINS, BINS. The girls have 8 storage bins that each have different types of toys in them. They also have 3 loose bins to keep all of their reading books, and school books. The bins help the kids keep their messes contained. 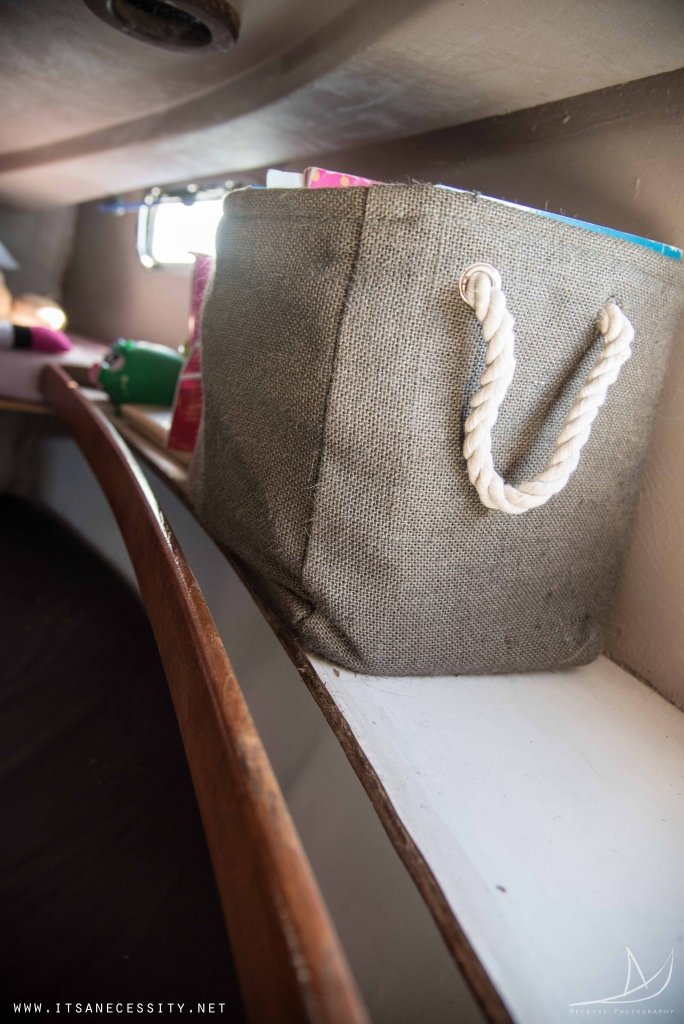 These few simple modifications have made it so our daughters were able to live their salty lives without having a helicopter mom around. It gave them a sense of freedom, and gave us a lot more laid back perspective on parenting. Keep em safe and set em free.