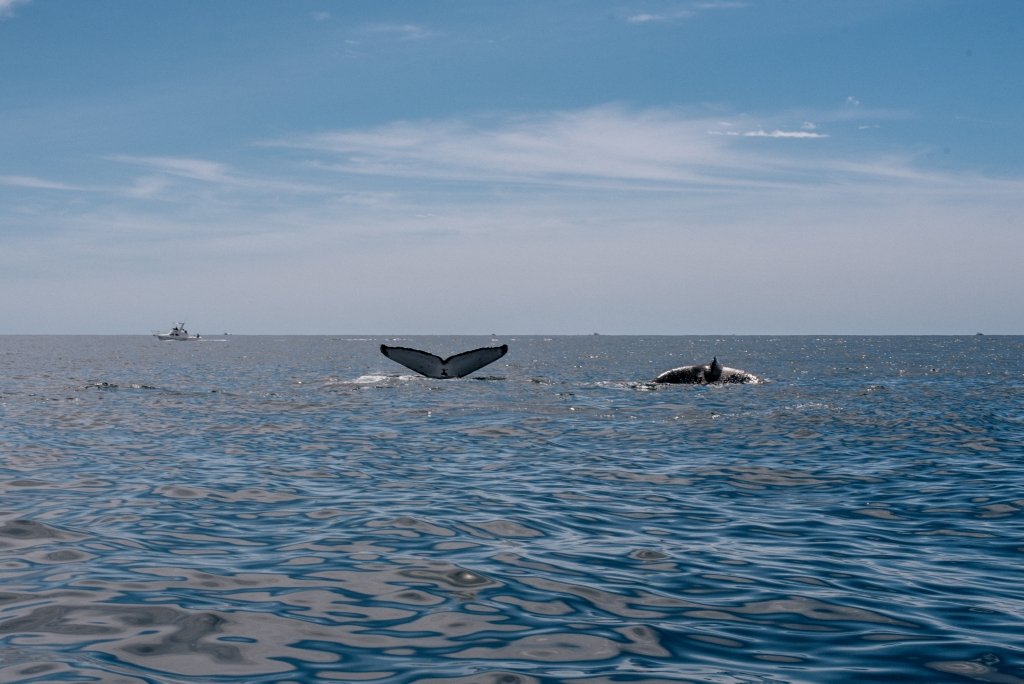 Even after having lived on a sailboat, and having had numerous encounters with wildlife; even after living in Todos Santos and watching the whale migration right off of our beaches, I still get as excited as a kid about seeing animals in the wild.

I can stand on the beach for an eternity watching for “poufs” of whale spouts. I have even made Eben stand with me for close to half an hour, on our date night, watching the sea lions lounging on the docks in Cabo.

So I was super stoked when we planned to go on a Humpback whale watching excursion with Cabo Trek in Cabo San Lucas. Added bonus, my mom got to come on the excursion with us, before we had to drop her off at the airport. 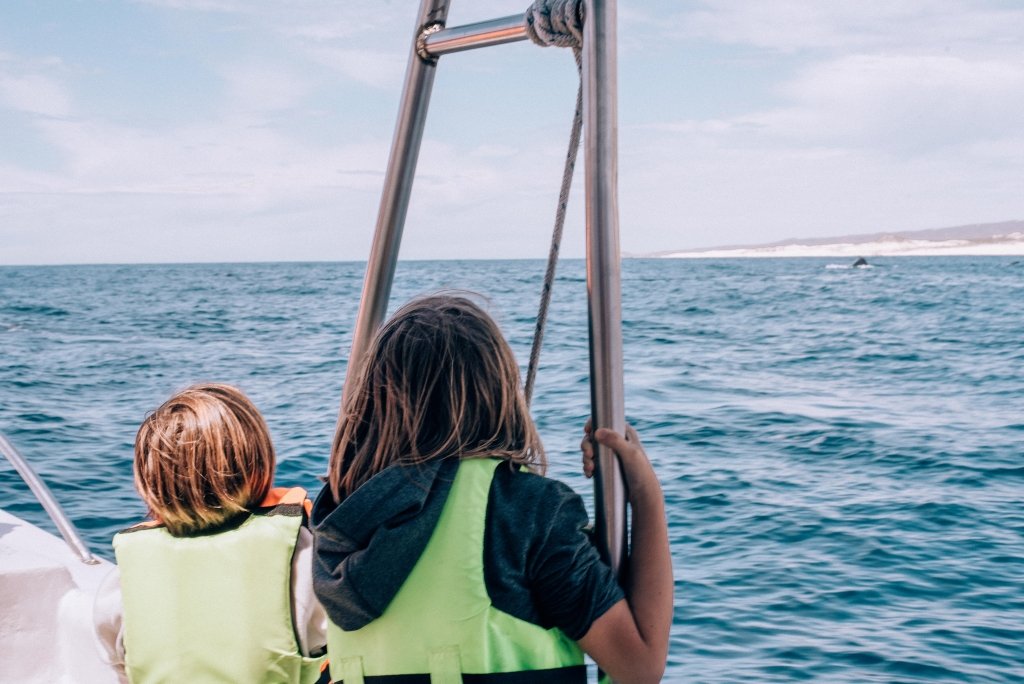 The #1 reason: They came recommended to us by a friend of ours. (Thanks Bridget!) There’s nothing better than some good word of mouth.

2. They do small boat tours. We were 11 on our boat, of which our family was 5. There was no having to watch over someone shoulder to get a good sighting. Each person had room to move around and get the best view.

3. They run responsible tours, meaning they keeping a safe distance from the animals (both for their safety and ours).

4. Their boat crew includes the captain (of course), a marine biologists and a photographer. I was super happy about the latter two. Someone to answer all of our whale questions, and someone else taking the pictures…although I did take quite a few myself too! 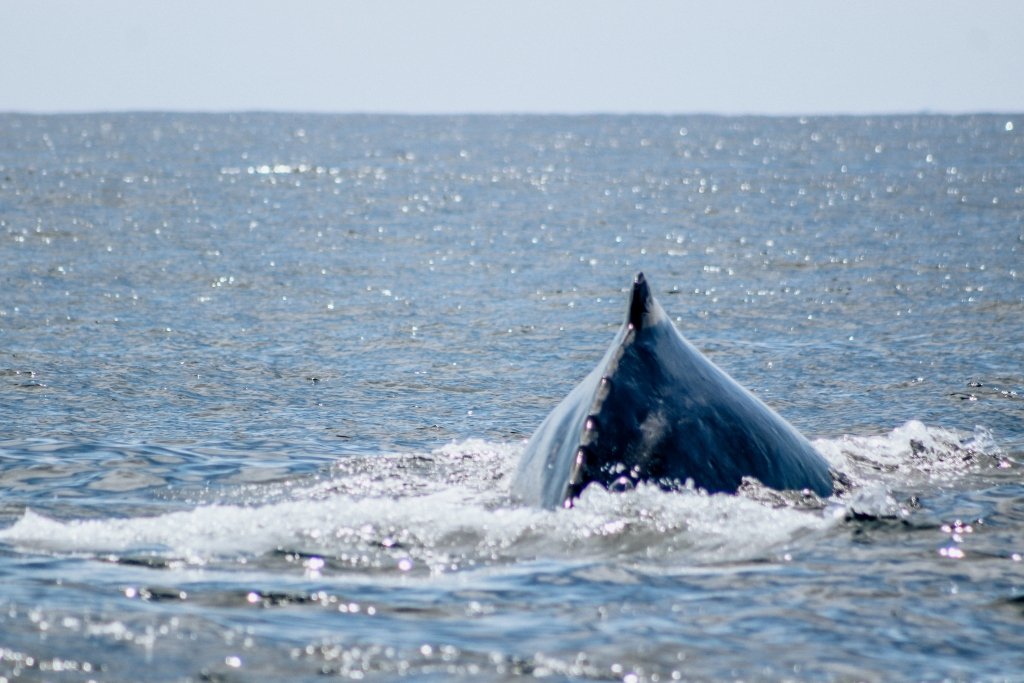 First the boat took us over to Land’s End/The Arch. Although it’s such a tourist attraction it is iconic of Cabo San Lucas, and the girls and I had yet to see it up close. (Eben had seen it as a teen when he came to Cabo on a cruise ship with his family.) I was all about getting a family picture in front of the arch, joining the millions of others who have done it. It’s still an impressive spot. 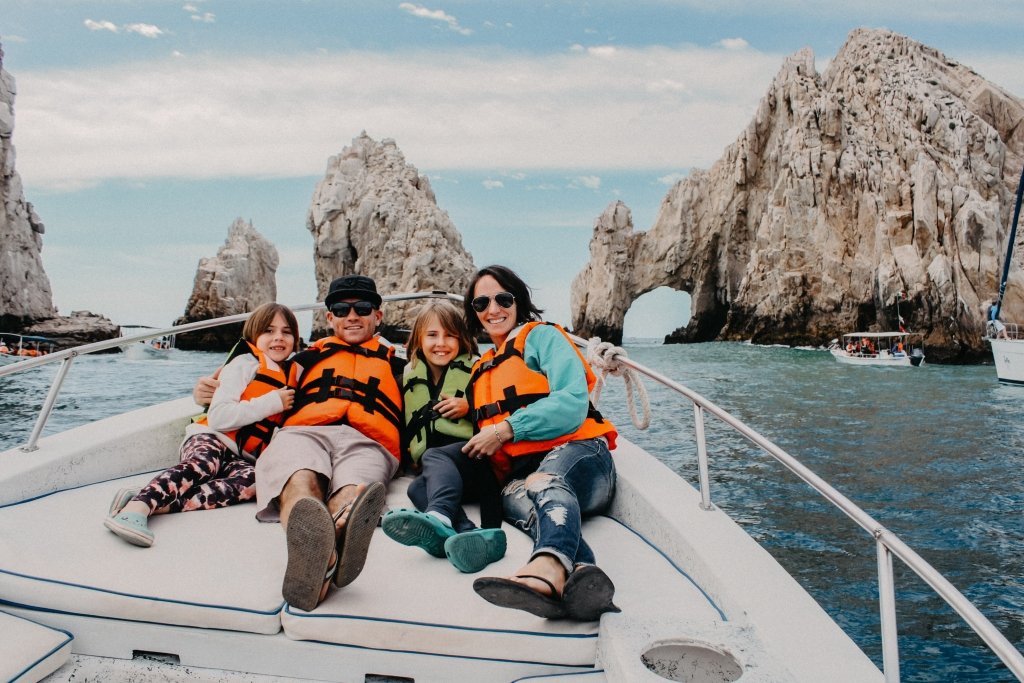 Then the whale watching began. Our guide, the marine biologist, Luciana was up front of the boat, with her binoculars, on the lookout. When she would spot one we would head over to where the whale was, and she then told us all about the whales. We learned so much about whales! She was really informative and explained things in a way that both the adults and our girls could understand.

The girls are still regurgitating information they learned on the tour! 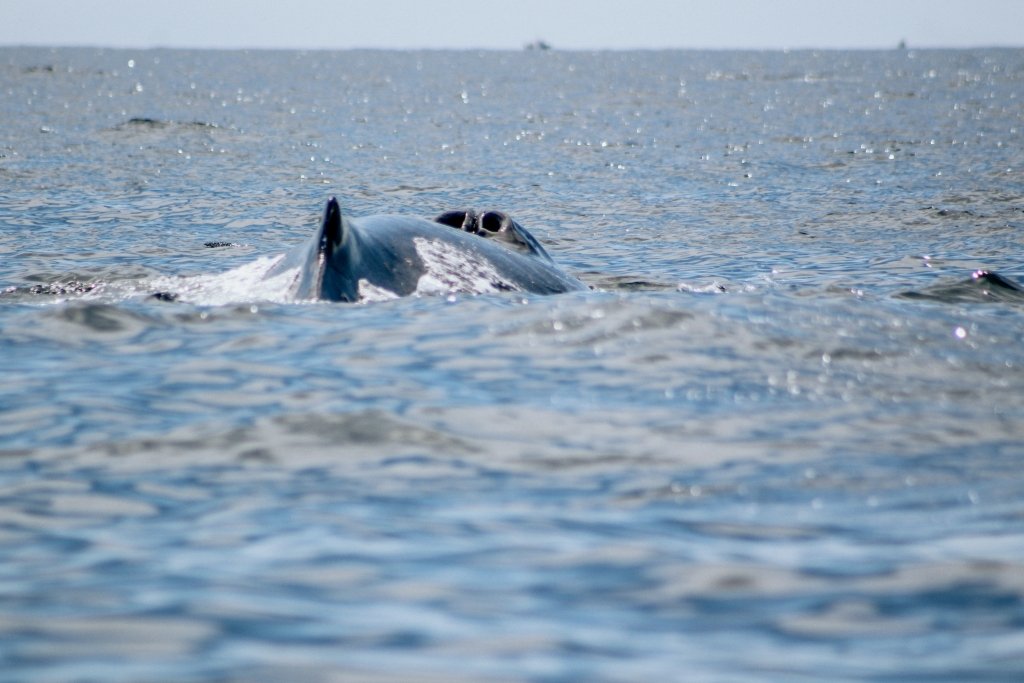 We got to see a bunch of whales. It’s a totally different experience from watching them off of a beach. Being able to follow alongside them as they swam, just watching them be, was really cool.

Once we were far enough out Luciana dropped a hydrophone into the water and we all got to hear the end of a whale song. The best part of that was watching Arias’ face light up at the sounds of the bubbles the whales were making. 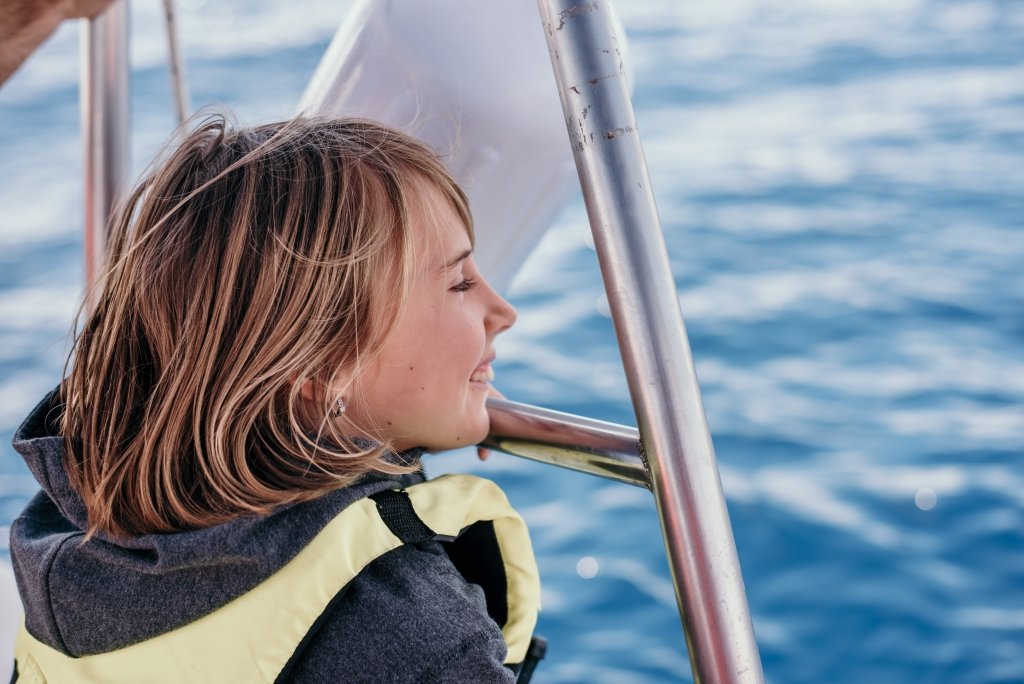 Throughout the excursion, Cristiana, the photographer, was snapping away. She captured some great candid shots of our fam. She was also able to get some great shots of the whales since she had multiple lenses with her (and I had just brought my prime lens). It was definitely a welcomed bonus having a photographer onboard. 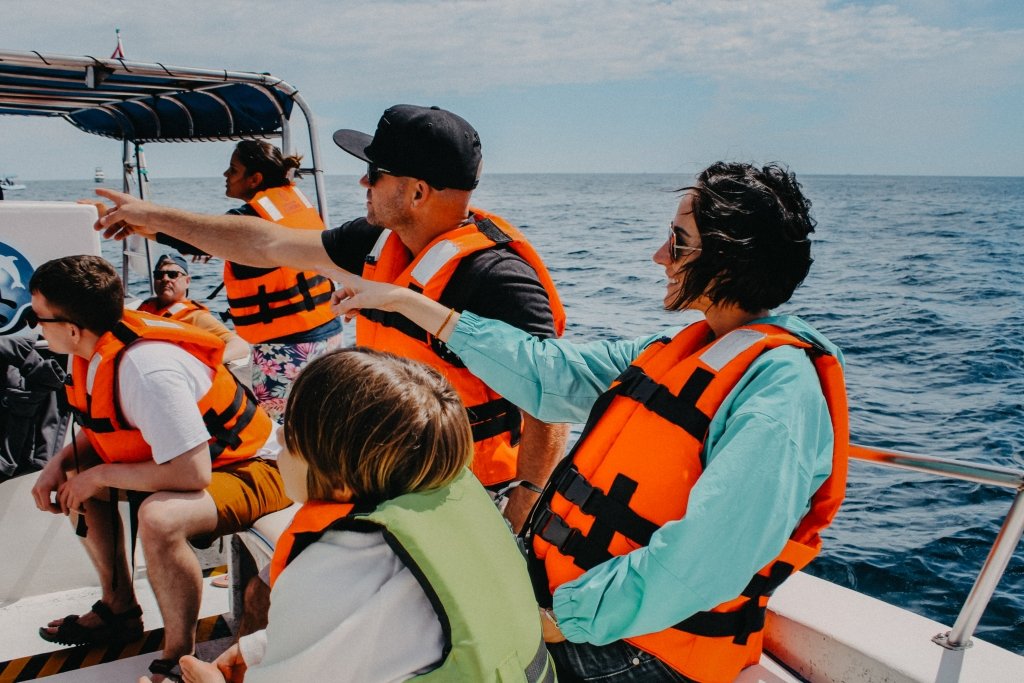 Yep, Ellia got seasick. No throwing up thankfully. But I put her seasickness on me, not on the tour company or the water conditions. The waves were small, the swell was small, and the captain was a good driver.

It’s more so that there was some bad planning on my part. Our excursion started at 11. Our girls’ usually each lunch around noon and then nap after that. By starting our whale watching at 11 I was ignoring what their bodies are used to. 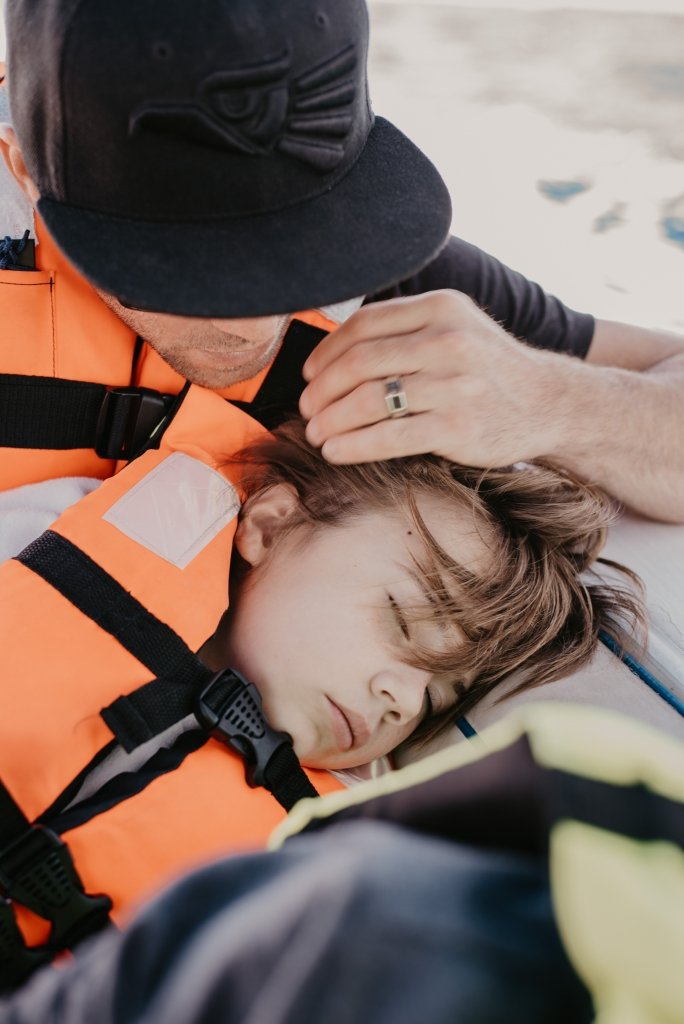 Add to that, the girls decided to play a game where they were starring down at the water zooming by (we were on a power boat) and we didn’t stop them because they were having so much fun.

Had I thought about it, I probably should’ve brought kids’ Dramamine and Motion Eaze with us. We used to use this on the sailboat when we were going to do longer passages with the girls.

Luckily it was towards the end of the trip. She had seen her share of whales. She cuddled up in Eben’s arms and fell asleep. As our boat reached the dock she woke up feeling good again and was asking for lunch! 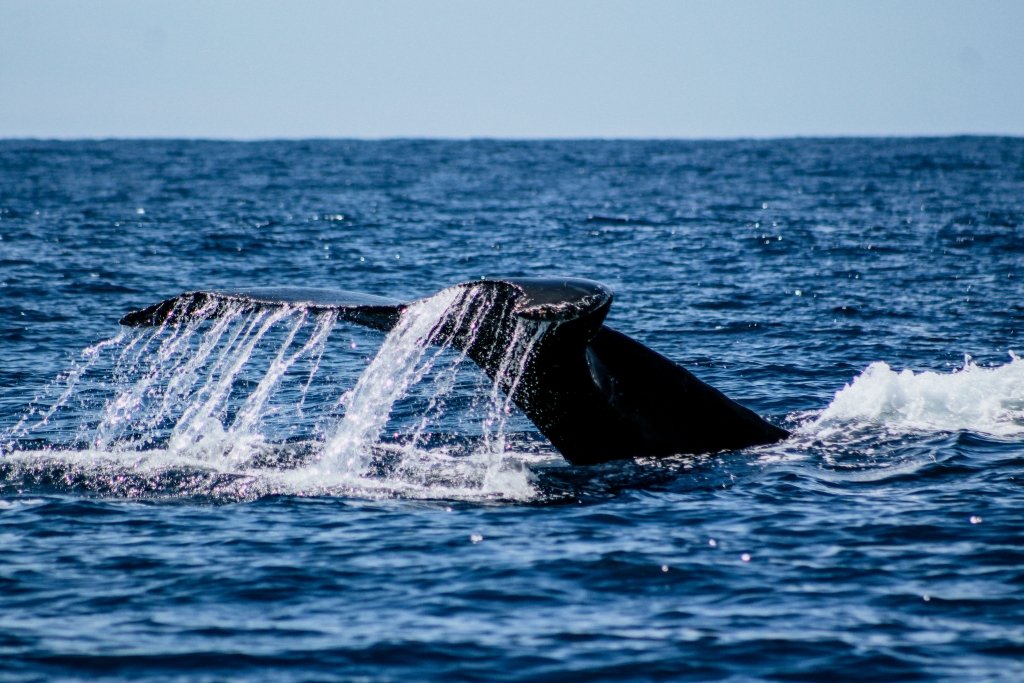 It was fun being able to do it my mom. She got to see Cabo from the ocean. Also doing a whale excursion with the girls was awesome. There is something magical in watching their faces as they watched whales swimming near us.

Now I’m even more keen to make the trip up to Loreto to see the Blue Whales, and over to Magdalena bay to see the Grey Whales and their calves. 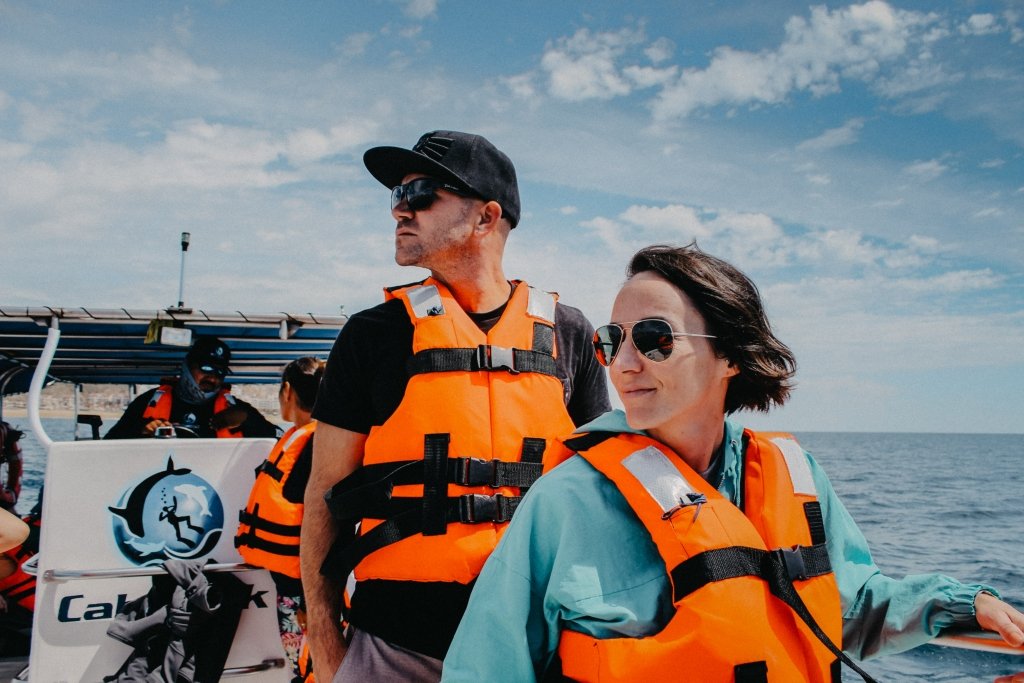