Out With The Old

Home/Out With The Old
Previous Next

Out With The Old 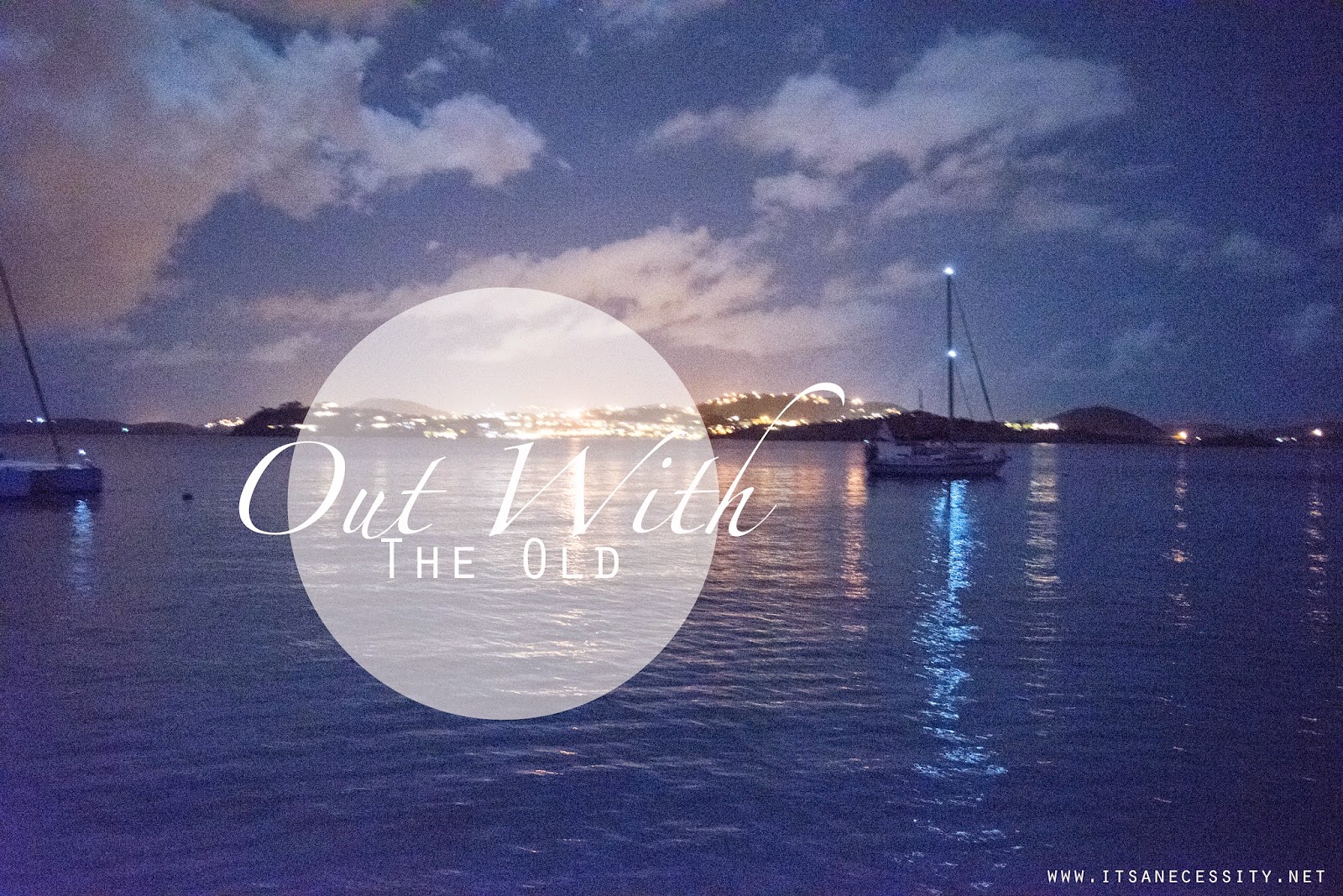 Everyone told us that the BVIs get insane over New Years. The bars are jammed packed, the party is on, and the anchorages and full to the max. So given that this is our first year in the Virgin Islands, and I am still not comfortable anchoring right next to the billion dollar mega yacht, we opted to stay in St Thomas in a quieter bay. Luckily for us, all of our friends agreed to stay too. Our anchorage may have been pretty bare, but it was nothing close to quiet, thanks to our group of crazies.

We all went over to s/v Salty’s boat to bring in the New Year, because being 65ft in length, they have us all blown out of the water with “hosting space”. We fit ourselves, our peeps from s/v Mary Christine, s/v Hideaway, s/v Laho, and the awesome chefs from Pizza Pi on this ship with lots of room to roam. And this is including our slew of kids. And yes, it was sort of like a bloggers’ convention but it was great to hang out with all these people that I have been following online for a while.
The night started off tame with lots of talking and hanging out. But once midnight rolled around the guys (mostly Eben) decided to take the whole “Out with the old” saying to heart. They joined in the wonderful fireworks that Charlotte Amalie was setting off by firing off some fireworks of our own (ie expired flares). Of the three firing attempts, the first two expired flares failed miserably, and the third, and old flare from a cruise ship went off no problem. The lesson to learn here (other than this was extremely stupid, careless, dangerous, and slightly fun) is that if you are restocking your flares, you want to get your hands on those cruise ship ones, because we would  not have been spotted on a sinking ship with those other duds.
The fun with expired toys did not end there though. Once they had their kicks from those they decided that our very old life raft was next. Life rafts are extremely expensive and quite important to have on your boat, but this one was gifted to us in the bahamas, from another cruiser that couldn’t recall where or when he had gotten it. Needless to say, this raft was older than us and we had very little faith in it. But given that my wonderful husband is somewhat of a packrat, even though we knew that in the event of an emergency we would be reaching for our dinghy before this decrepit raft, we still have been hauling it around on our deck for the past two years. The night of the 31st, this raft met its fate…it was going to be used for pure entertainment.
We thought they would pop the case and it would be an anticlimactic fail, but to our surprise (and slight sadness from the waste of money) the thing worked! But it looked as old as it is. Even though it blew up and held its air, the CO2 canister was rusted, the top tent was worn thin, to the point of being see-through in some spots, and all of the orange of the material rubbed off at the swipe of a hand. That didn’t stop the guys from having some fun in it though. In they hopped, first only three of them, but finally the fourth jumped in as he secretly felt he was missing out on the fun. And off they drifted, giggling like boyscouts as they discovered all the new treasures that were inside the raft. The previous previous previous owner had packed that thing with individually sealed water packets and a first aid kit with medicine instructions hand written on each bottle.
We let the boys drift around the bay for a while, wondering if they would need one of the women to go rescue them. In the end they managed to paddle themselves back to s/v Salty and not bother too many of our neighbouring boats while doing so. The tough part was that after this night of laughs and nonsense, we were the ones that had to bring the evidence home. There is no hiding from the shenanigans that happened the night before when the entire bay wakes up and you have a huge orange lift raft tied up to the back of you boat!
It did serve for a few fun minutes for our girls too as they got to travel in it to the beach and back the next day. Now I have to find a way to dispose of that thing, before Eben tries to repack and keep it. 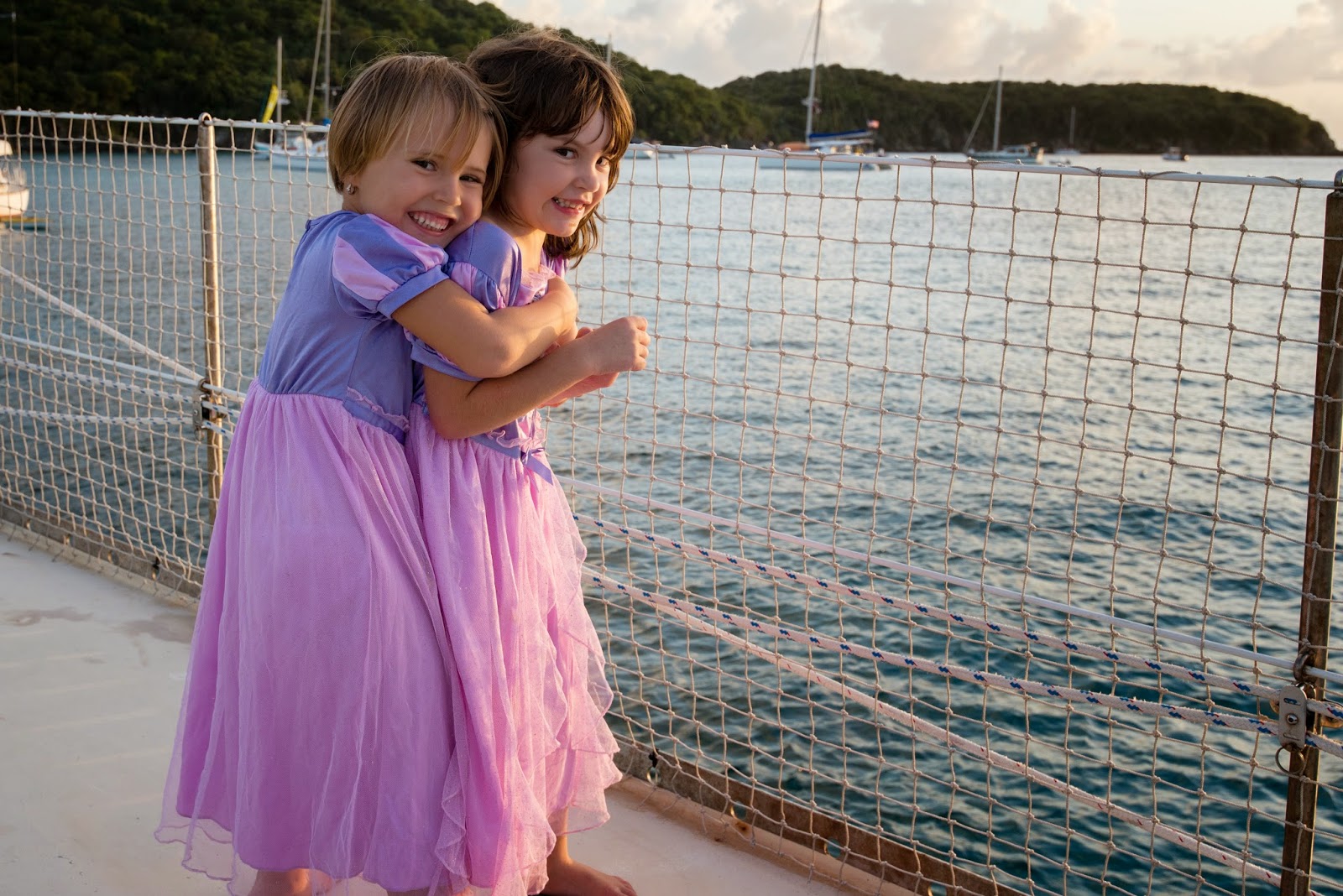 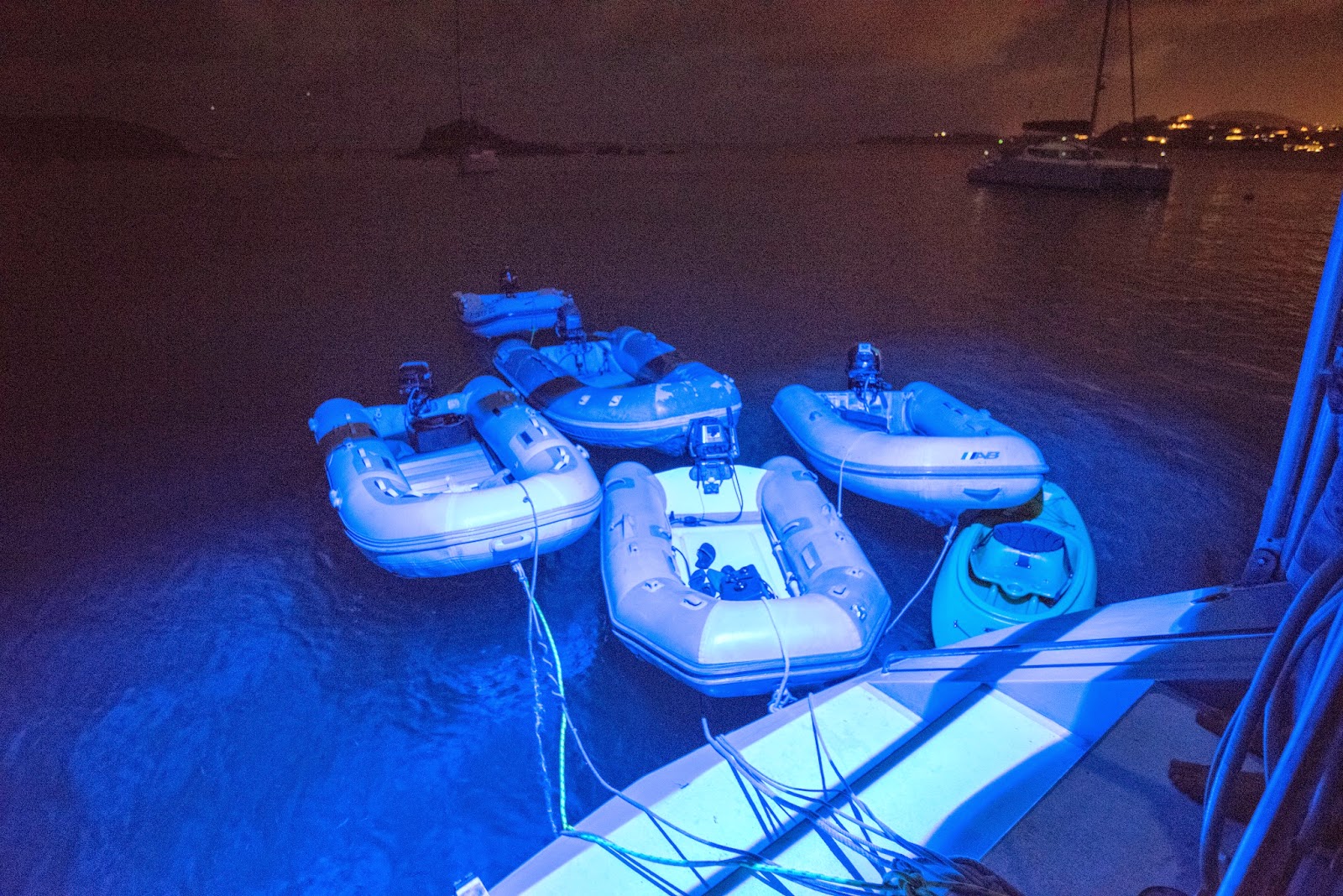 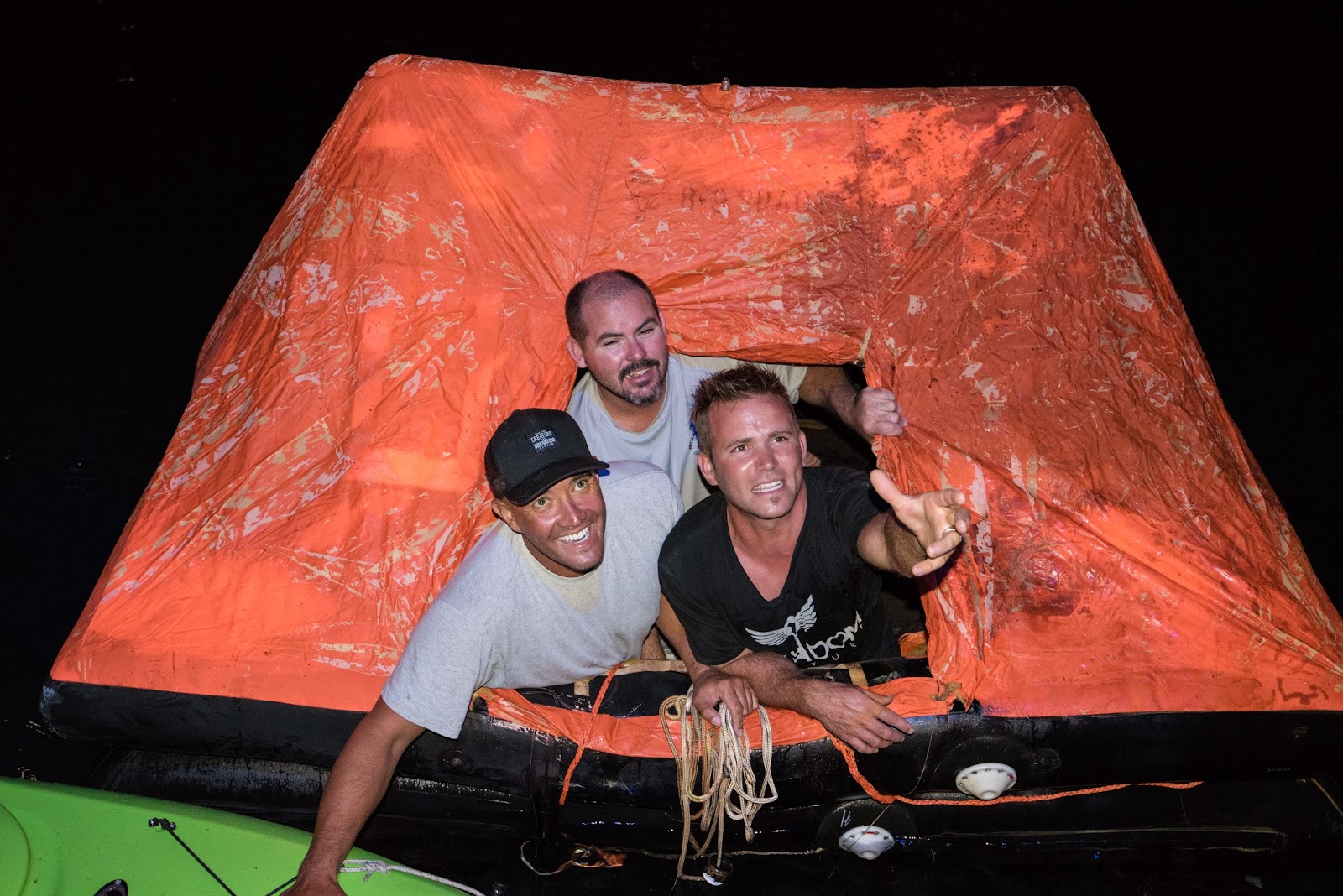 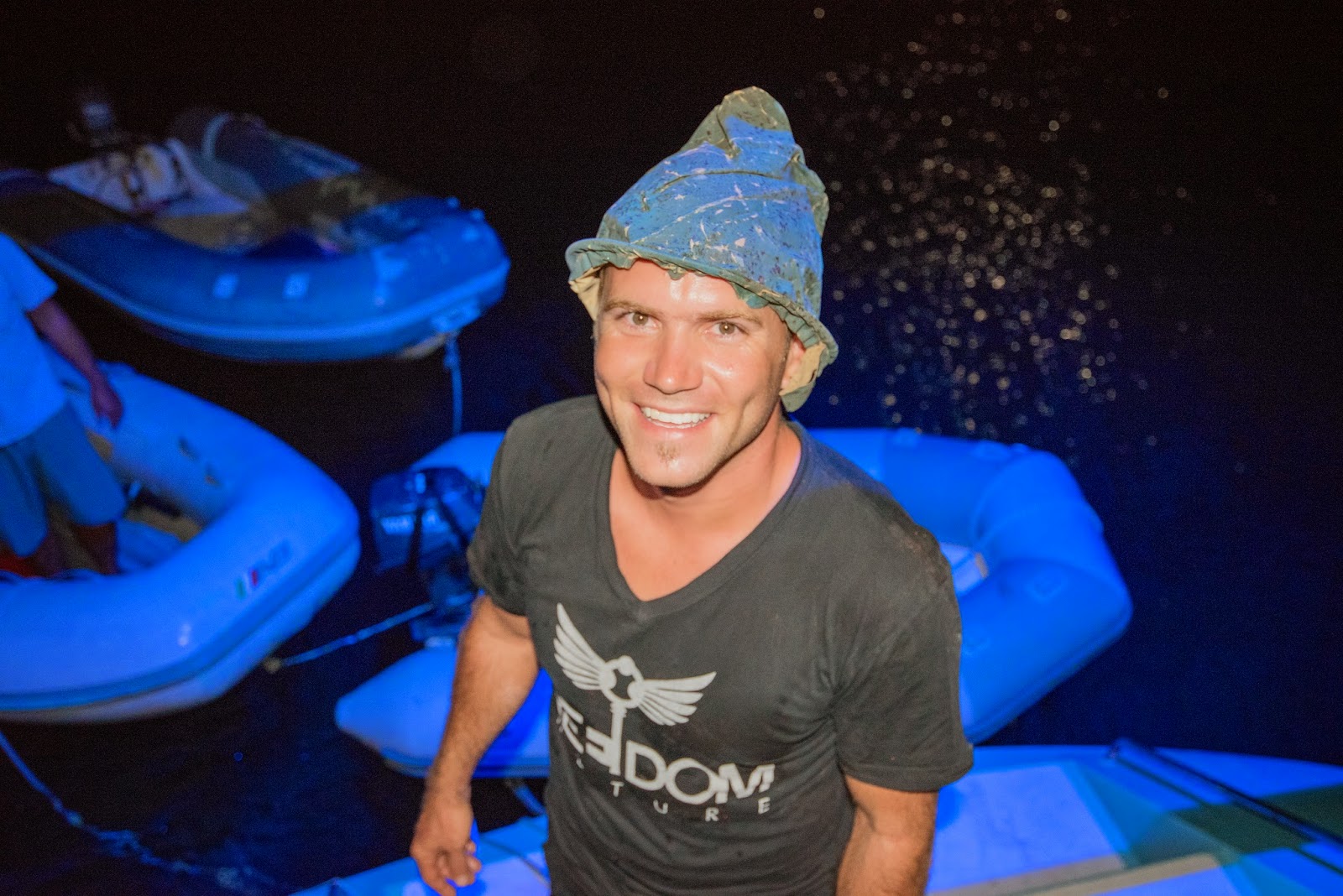 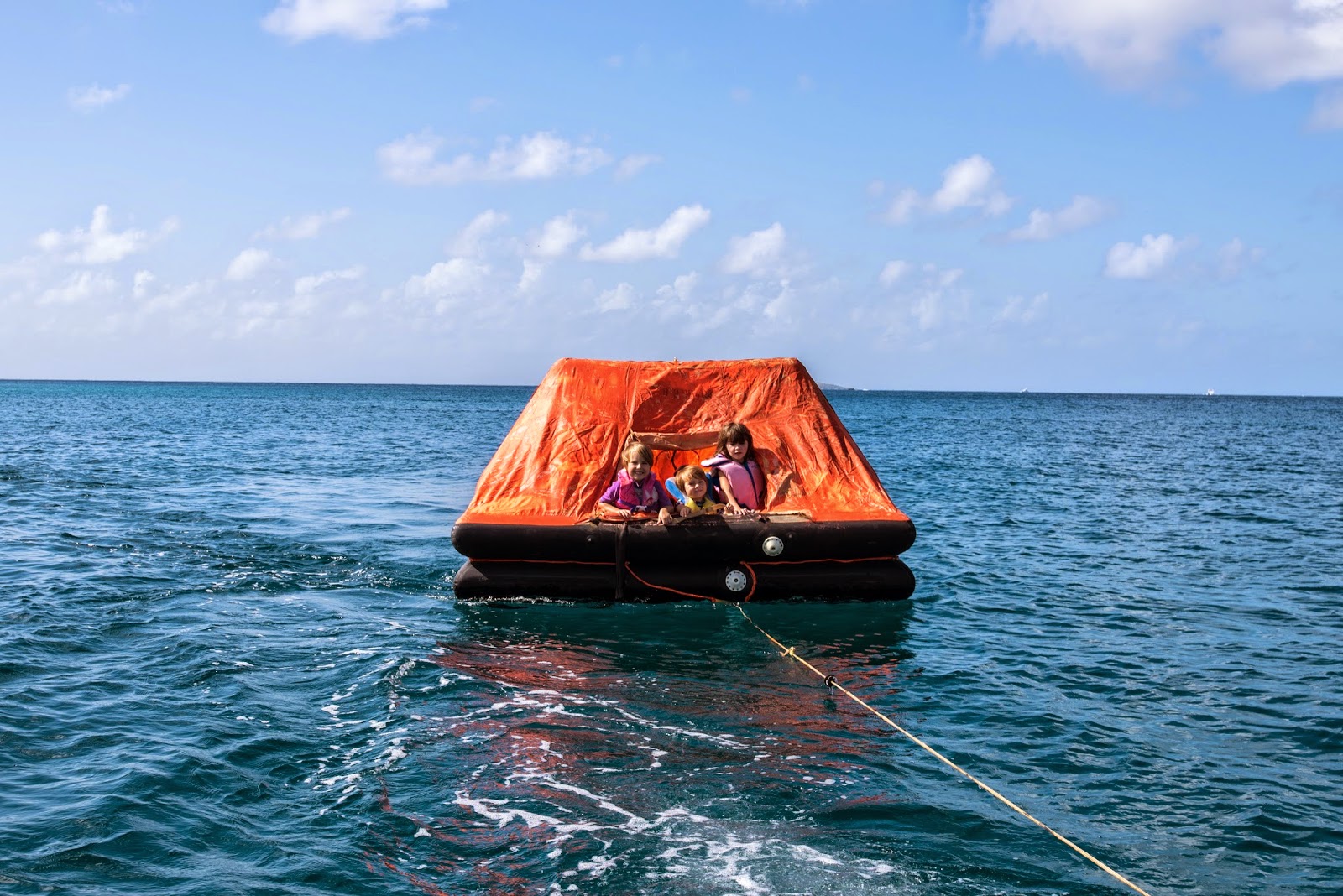 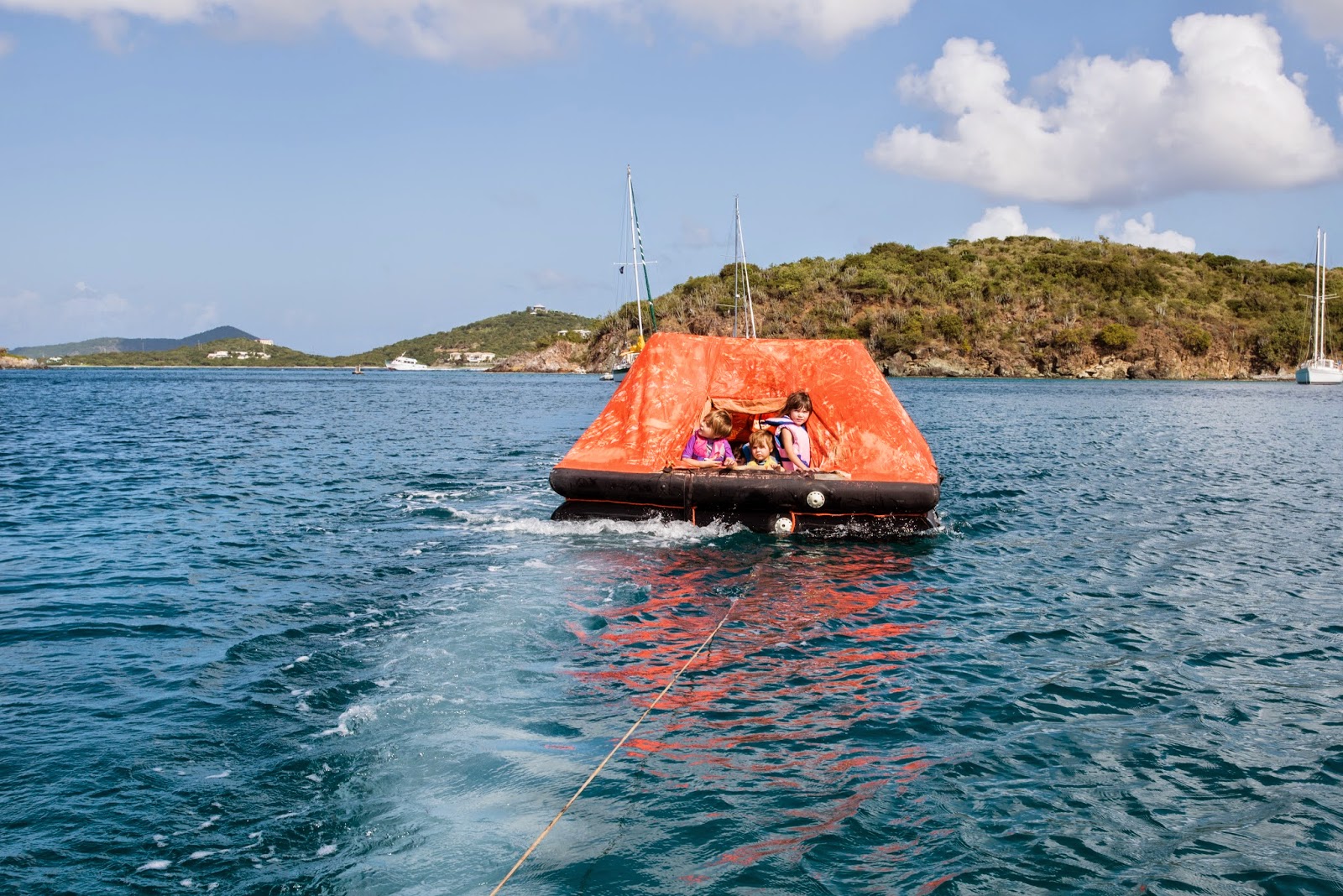