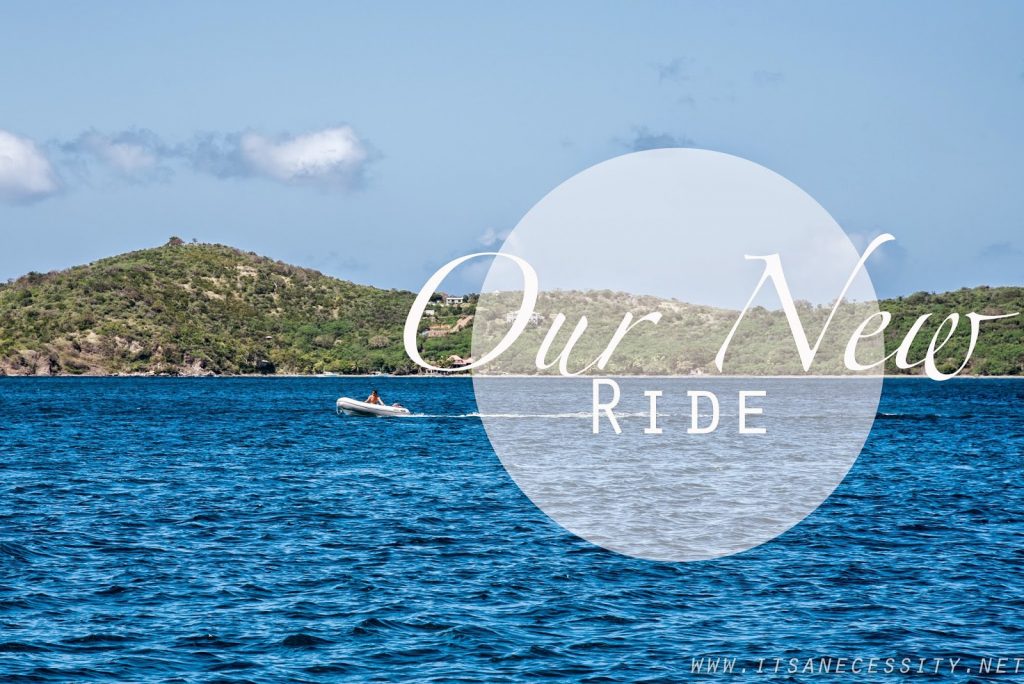 You know those dinghies that you see at the dock, the derelict looking ones. The ones that have the tubes half deflated, water swishing around the inside, and you worry if the outboard engine will stay above the water line. That’s what our dinghy was starting to look like. I am not joking. We were having to pump air into it every time we wanted to use it. (Eben is a bit obsessive and would count every pump, and it was nearing the 160 a side.) At first, when the dinghy started ailing we joked that it was our daily workout having to pump it back up. But when it got to the point that we would go to the beach for a few hours and when we went to leave the dinghy was flat again, it wasn’t funny anymore. Eben most often ended up pumping it back to life (because he felt I pumped too slow!), which meant he ended up being a sweaty mess before we even got to go anywhere.

Eben is an expert dinghy repair man. He has all the tools, the materials, and the skills. We used to get people coming to ask us for his help and knowledge. But this dinghy, it was beyond repair. This dinghy was gifted to us 2 years ago, but we think it was actually from the 80’s. It came to us already in need of much time and love, which Eben carefully poured into her. But after 1.5 years of cruising with is, and 6 months of sitting on deck in the DR, the poor thing got old. There was nowhere left to patch on it, the air would come hissing out of every seam. It was time to let her go in her old age.
The thought of buying a new dinghy hurt, in the bank account type of hurt. We needed a big one, one that could support our 25hp outboard, meaning 10-12ft. Those are up in the $4000 range. Not something we were looking to spend on this sailing season. But they Eben had an amazing idea. Here we are in the Virgin Islands, charter boat central. All these charter companies rent out their boats, meaning they have to keep them in tip top shape. Once something starts to look old or worn and is beyond repair, off to the graveyard it goes. Even if it is still in perfectly good working condition, just a little less pretty to the eye. So I contacted every charter company in the area asking if maybe they had any used dinghies they were looking to get rid of. And a couple of them did!
Through a random series of events we ended up on the Moorings (charter company) docks for a night. Our first thought was to check with them, since we were there in person. After clearly stating that they “Are NOT in the business of selling dinghies” they showed us two that were no longer being used. It was a long debate for us. One had many patches on the top side (from rubs and scuffs) but looked newer. The second looked older, but had a couple patches on the bottom (harder to fix) and needed some fibreglass work. We also knew of another company that had one for sale in a different island, but we had not yet laid eyes on it. So after a lot of going back and forth, and back again, we settled on the first of the two we saw. They offered to do a couple small repairs to it and then it would be ours, for $500!!!!! (well it was $450 + $50 to the guy doing the repairs). That is hugely discounted to what we first pictured we would be paying when the other dinghy started failing us.
While we were at the docks Eben also hired one of the employees (on his lunch hour) to fix our outboard which had seized on the bar and we could no longer swivel up. Who would have thought that after three days on a dock we would be leaving there with a New-To-Us dinghy and a fixed outboard engine! They even offered to throw out our old dinghy for us. Which was awesome because we were wondering what we were going to do with that piece of junk.
I can happily report that it has been a few weeks since we got our “new” dinghy and we have not had to put in a single pump of air yet!!!! Eben has also decided that he is going to make a pair of chaps for it, to keep it protected from the UV and so we don’t rub on the existing patches too much. We want this dinghy to have the fullest life possible.
(Maybe I can get Eben to make a pair of chaps for himself too! LOL!) 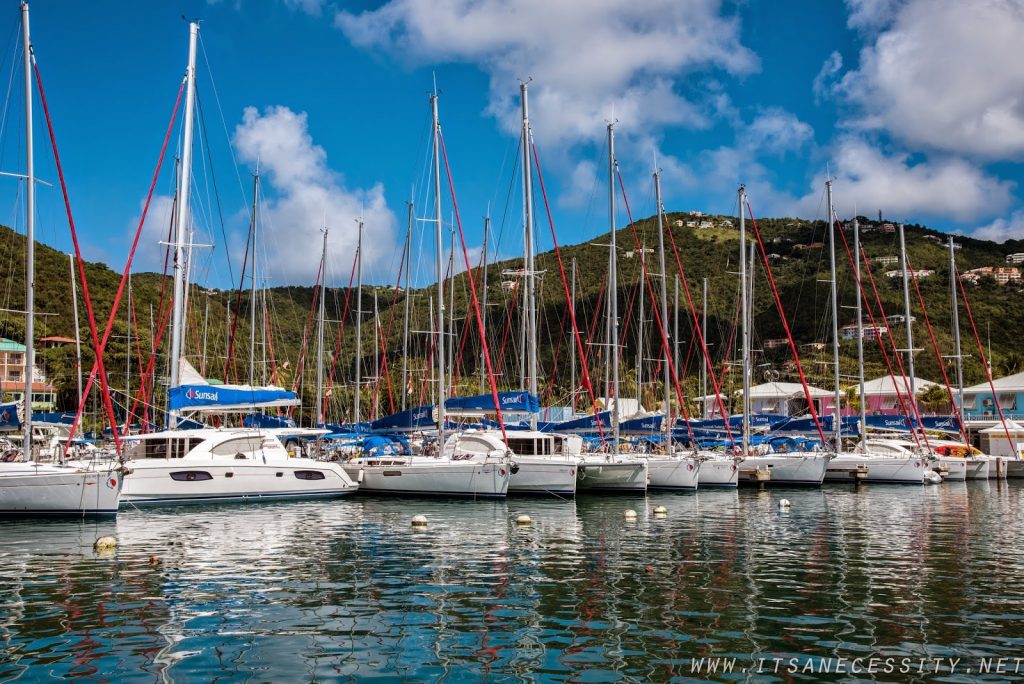 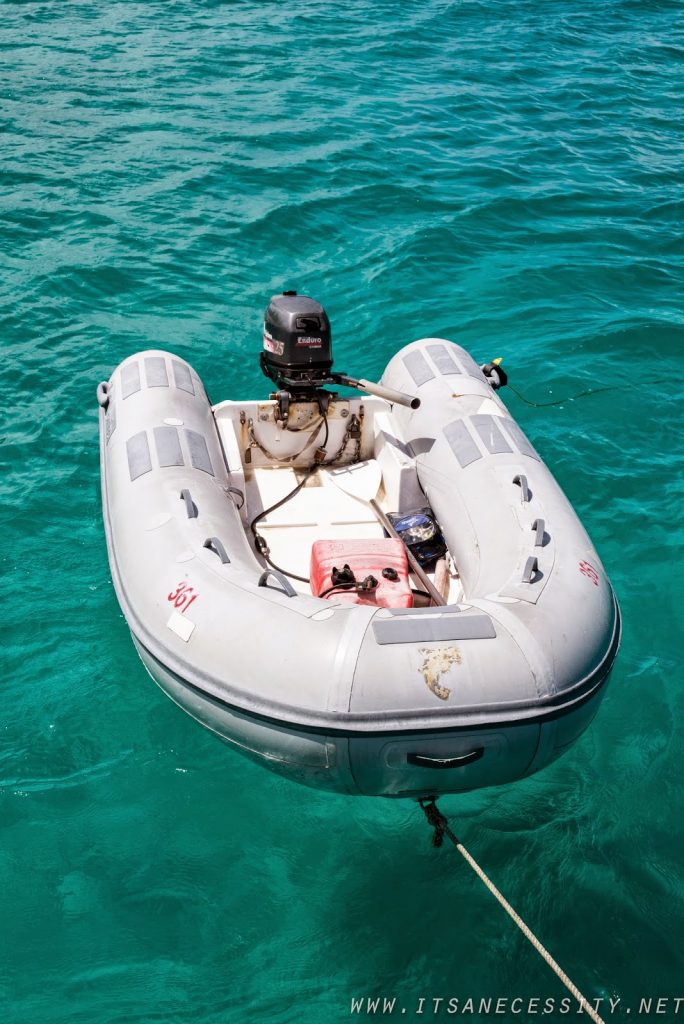