Being that we come across so few other family boats out here means that our daughters get spoiled a lot, not by us, but by most other cruising boats. You see, most of the boats that we come across belong to cruisers who are now at the point in their lives to have grandchildren of their own, grandchildren that are in far off places that most of them don’t get to visit nearly as often as they would love. That is one sacrifice that many cruisers make; but our daughters seem to benefit from.
Any time there is a holiday where one would expect to be with extended family, such as christmas, easter, birthdays, etc our boat gets a few more visitors than usual dropping by for some extra kiddy hugs and kisses and often dropping off surprises for our two very thankful wee-ones. They take their roles of “honorary grandchildren” seriously. We can definitely say that Arias and Ellia are not neglected when it comes to outside love.
One beautiful gift that we received was from a french-canadian while we were in the Bahamas. He has noticed our two blond beauties running around freely on the beach and thought he had something to share with them that would light up their eyes. . . and he did. He is a distributor of floating lanterns, fabricated in Thailand. And for the parents of a daughter who loves Disney’s Tangled (there is a magical scene filled with floating lanterns) she couldn’t be more excited to hear that we had two of them to release into the sky. The hard part was that to light them, and let them float away, you need absolute calm weather. No wind whatsoever. The reason for this is that if you light the candle inside the floating lantern and then a tiny gust of wind comes through the paper could catch the flame and turn your beautiful moment into a horridly dangerous fireball that you have no control over.
It took us almost 3 months to get the right conditions, both no wind and also at a time when it was dark out but the girls weren’t in bed yet. Even though there was no wind to be felt I still feared that once we lit the lanterns they would catch some air current and be pushed into someones mast, lighting their home on fire. Lets just say that the first few moments of this lighting ceremony were rather stressful for me, until I felt that they had floated high enough into the sky that they could be of no harm to anyone else’s floating home. (Can you imagine being responsible for setting someone’s boat on fire from a silly floating lantern. ugh.) We had a slight scare with the first lantern and our own boat, we lit it, let it go, and of course, of all the possible directions it could have floated up into the sky it chose to follow our boom towards the back of the boat and barely squeak through the backstay and our topping lift. Eben and I were both ready to jump and grab it, or hose down the boat, or whatever emergency manoeuvre that was required to save ourselves for a horrible fate, and being the laughing stock of many.
In the end, they were magical and seeing Arias jump around the boat in excitement made our evening. We even let her help release the second lantern, highly assisted, and watched as it floated away into the very high distance in the sky. 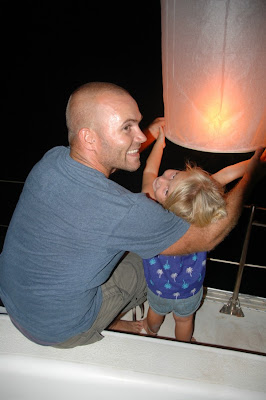 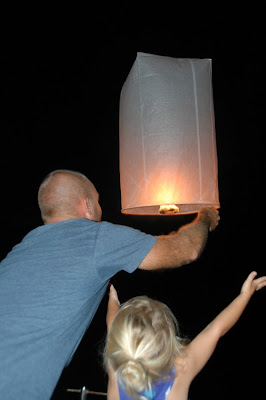 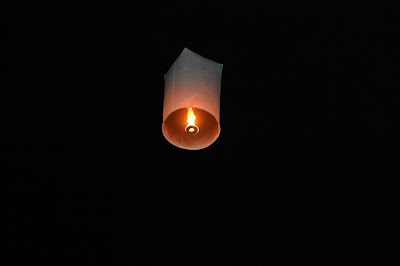