Squeezing Our Love Into A 41ft Boat

Home/Squeezing Our Love Into A 41ft Boat
Previous Next

Squeezing Our Love Into A 41ft Boat 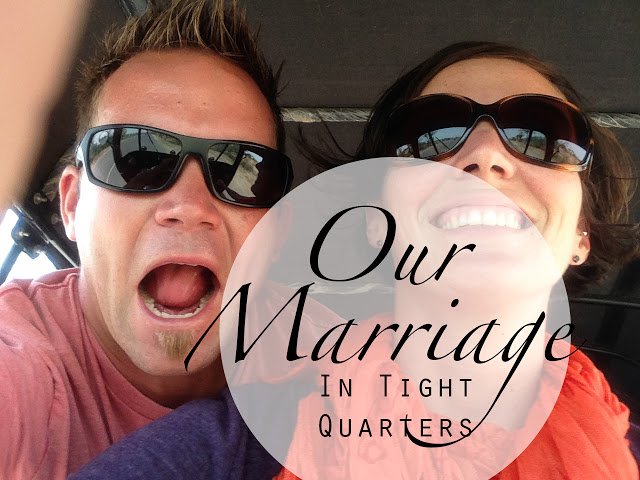 For most people 41ft of living space is not considered a lot. Now throw in one married couple and two young children and what do you get, some “close knit” relationships.
Most of the posts going around lately have been about having our kids in such “confined” spaces, but there is a whole other aspect to this that has been almost ignored, our marriage in tight quarters. There is a saying that 1 year of marriage on a boat equals 7 years of marriage on land. The reason for this is that you are with your spouse pretty much non-stop, in each others space, living the highs and lows that come with sailing. So yes, all those extra hours of one-on-one time have to count for something, so I can now say that Eben and I are going on 49 years of marriage!
I like to think that our love story is a special one. Young love, separated and found again 7 years later. Those years in between giving us time to grow personally and mature, but never forgetting one another. It is pretty special to be able to say, and believe, that I got to marry my soulmate. So squishing that love into a sailboat hasn’t been too difficult for us.  Sure we aren’t perfect, and still annoy each other and argue from time to time. When you take a marriage and then throw in the stressors of raising children, and of sailing, there are bound to be some confrontations.
We don’t argue much but those are our two main triggers, kids and sailing. When I get at my wits end with one of the girls, I lose patience, and may not react in the nicest of ways to Eben when he is offering parenting suggestions. Or when we are sailing (mostly anchoring), in moments when you are slightly stressed and just want to get things done right, if there is any miscommunication or misunderstanding, comments can sometimes get snippy.
Over the years Eben and I have learned how we fight and how we communicate. And those are what have been keeping us happily married. (That and a few bedroom things that will be left out from this blog!) Eben wants to confront the issues and talk about them right away, whereas I like to step back and think about it all for a while and then discuss it. It also usually takes a lot of coaxing to get me talking. I wouldn’t say that I am passive aggressive, but more that I prefer to not be confrontational, those situations intimidate me greatly. (usually into tears, even if I don’t feel like crying.) As a couple we have learned how to listen and react to one another in an argument. And it has taken us 5 years to get our “anchoring sign language” honed, and we still have slip-ups every now and again.
We talk a lot, we laugh a lot, we dance, and we NEVER go to sleep angry. That last one is sometimes a hard one for me, since I choose the quieter path. But we have realized that letting things simmer over time is a waste of our energy. We learned a good quote last night, from our friend Mike on Argo. The quote, derived from buddhism, goes, “Holding on to anger is like grasping a hot coal with the intent of harming another; you end up getting burned.” This is one of the reasons that EVERY night, before we fall asleep, we ask each other “If I have hurt you today, will you forgive me?” Every night. By doing this we have to either forgive the other, or if something has been bugging us, talk about it until forgiveness can be found. This has caused for some late night conversations, but has also allowed us to always going to sleep in a loving manner. (We also do this with our girls at their bedtime.)
Being in tight quarters has not been detrimental to us, it has taught us better communication skills. It also helps that after 7 years of marriage I still find my husband extremely sexy, and his jokes still make me laugh, no matter how silly they are.
By It's A Necessity|2021-03-23T09:46:43-04:00July 30th, 2015|Uncategorized|6 Comments