A Forced Pause Before The Snow

Home/A Forced Pause Before The Snow
Previous Next

A Forced Pause Before The Snow 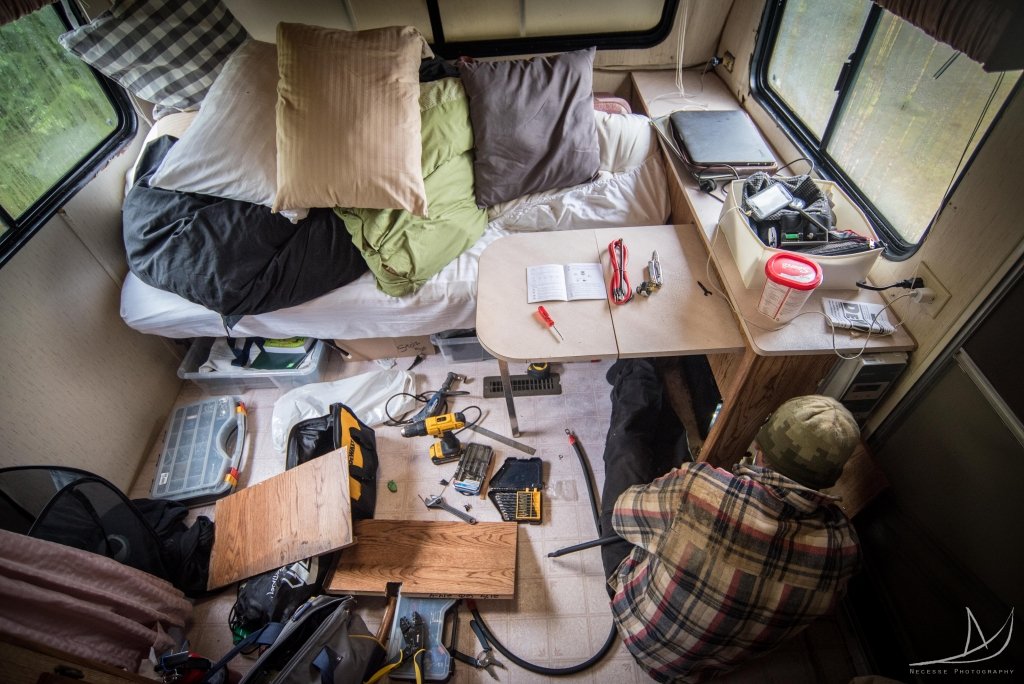 As I am sitting here typing, Eben is cramming himself into the nooks and crannies of our 23ft travel trailer. He has taken on two new projects, that even though they were not at the top of our “desired to do list”, needed to be done. The Canadian cold is approaching. Neighbouring cities have even seen a snowfall. Every morning I look up at the mountains and see how much lower the snow has crept its way down with the night time chill. We currently have our family living in an uninsulated trailer, that had a temporary battery charger system, and a 35 gallon water tank. If we want our lives to be a little more comfortable in the upcoming weeks, some changes needed to be made. We needed a proper solar array, and some more water storage. So although all we would love to be doing is being “up on our hill” prepping the land for our house, the priority of comfort came first.

On our last supply run to Calgary we stopped in at the Solar Warehouse and bought ourselves everything we needed to set up our solar on our trailer. We didn’t want to go overboard, as this trailer is only our “temporary” home, but we still wanted to be able to live comfortably (being able to charge phones, laptops, and turn on lights without having to power up our generator). We were smart about it, and although it did hurt the wallet, it could have been way worse had we let ourselves get carried away. For our trailer we are going with: four 75watt panels, 2 6-volt AGM deep cycle wired together to make a 12volt battery (225 amp hours), and an MPPT charge controller. We also bought LEDs to replace all of the trailers current light bulbs. 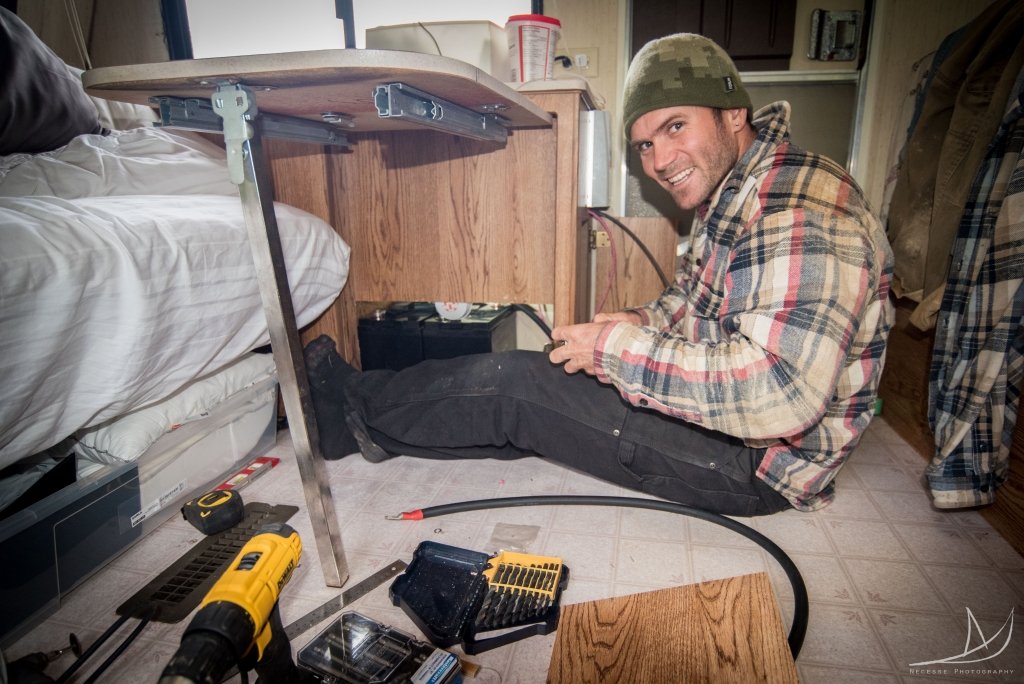 For our water, yes we could’ve been fine with the trailer’s existing tank, but then if we wanted to shower in there our water supply would dwindle real fast. And I know neither of us wanted to be the ones to have to do a water run in this cold weather. (We draw our water from a nearby river, load it into a truck, and haul it back to the trailer. Sort of a water run on a boat, but now the water and air are freezing!) In Calgary we scoured the city for “FOOD GRADE” water barrels and brought them back to our new home. Eben then proceeded to dig a 2.5ft pit in which they would be buried. The pit is under our trailer, which then will be insulated/bermed, in the hopes that the water barrels and pipes won’t freeze. The bigger puzzle was trying to figure out how they would be filled, how to vent them, and how to draw water from them by using the trailer’s water pump without making too many modifications to the trailer. (We have no plans on selling this trailer, but Eben likes doing things “properly” and wanted to make sure it could be turned back to its original state if ever that needed to be done.) 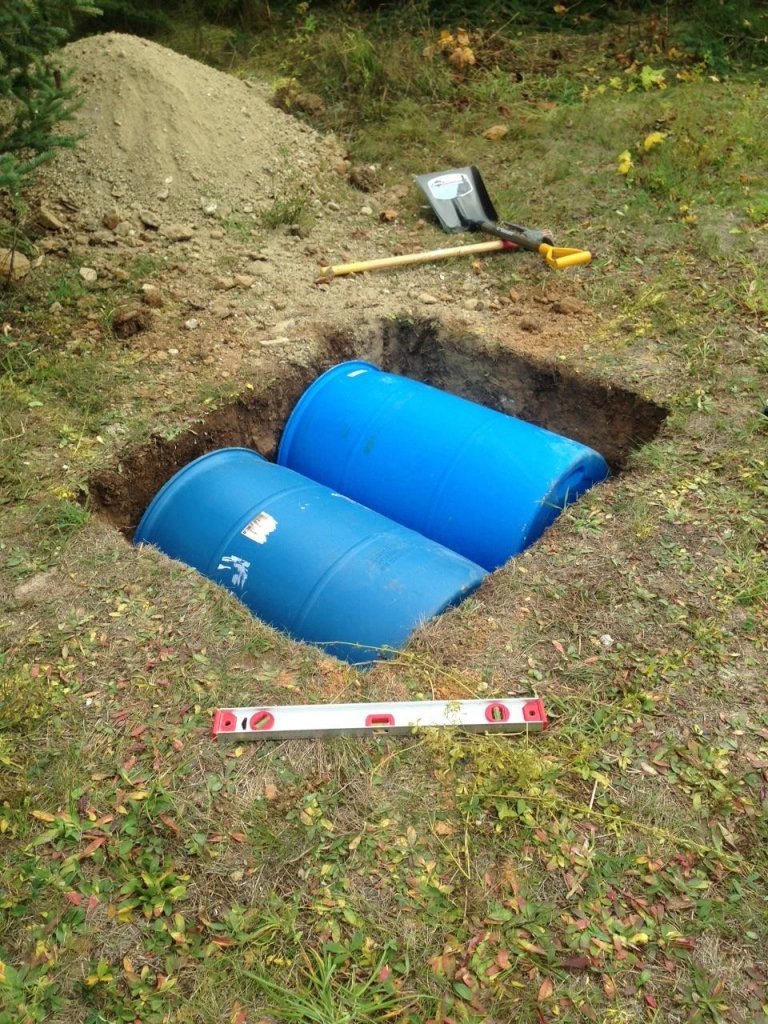 Not only has Eben been working non-stop (and on his own, I’ve been running around doing other stuff), but he has been stuck doing it schlepping around in the mud. We have been getting nothing but cold, cold rain, making every job seem that much less appealing. The upside, outside of the evident fact that we will be able to live more comfortably, is that we have started receiving some of our Dickies work clothes in the mail, so at least he is well dressed in this horrible weather! 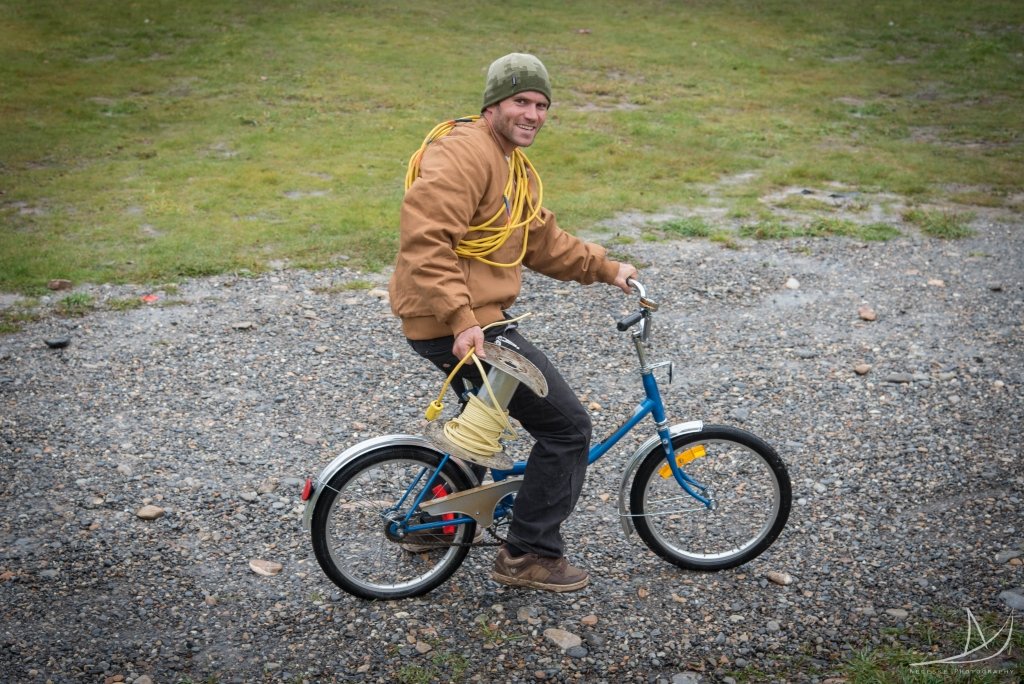 He constantly impresses me with his work ethic and determination. For his sake, I hope he gets this solar project done today, that way we can at move back to working on “the land” and getting a feeling of “moving forward” with our actual project. But, don’t get me wrong, I am also completely thankful that he has taken this “forced paused” time to make our living situation a little cozier.