Our Adventures In Building Our Own House: Plans, a Shipping Container, Forms, and Rebar

Home/Our Adventures In Building Our Own House: Plans, a Shipping Container, Forms, and Rebar
Previous Next

Our Adventures In Building Our Own House: Plans, a Shipping Container, Forms, and Rebar 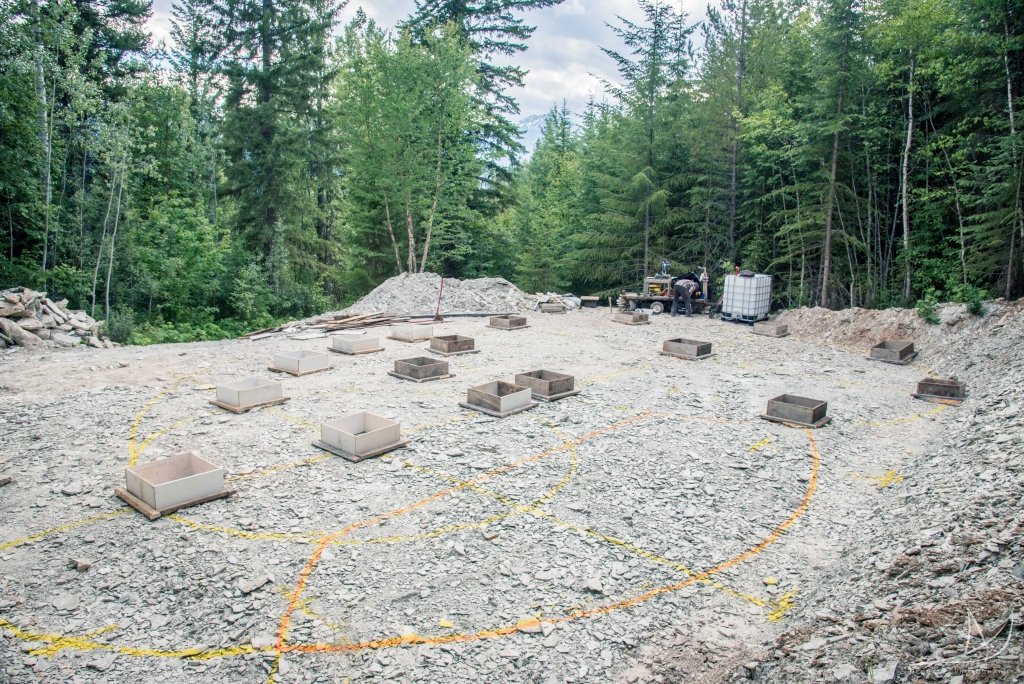 Looking at our build site, sometimes I feel like we haven’t made much advancement at all. But now, looking at everything we have done in just the three short weeks we have been back in Canada is pretty impressive. Especially considering we are doing this with just the two of us. And my involvement is only part-time as I take care of some of the daily stuff with the girls, like supervising nap time.

Things Are Moving Along

In our “past life” we learned not to set sail on a schedule. In sailing, schedules and being in a hurry can be dangerous. Leading you into difficult weather because you feel you have no other choice.

Building with a deadline, however, we feel helps keep us in check. Knowing that at some point over the next couple of months Eben will head back to the VIs for a bit, means our build has a final date.

That date has not been set yet. But knowing we have one has kept us going HARD.

Our time to date was used to create a new plan, build forms for concrete, and bending/tying rebar.

This was probably the most time-consuming part yet. As it should be. You can’t really build a house without knowing what it is you want.

When we realized that our Old Plan wasn’t going to work for us, we sat back down with our laptop and started designing. Over the course of a few days and lots of chats, we came out with a house design we really love.

Then we had to make sure that this design was actually doable.

Eben and our brother-in-law Sebastian (who is an engineer) took the day doing the math. Figuring out supports, dimensions, loads, distances, etc. Making sure our house wouldn’t topple over! 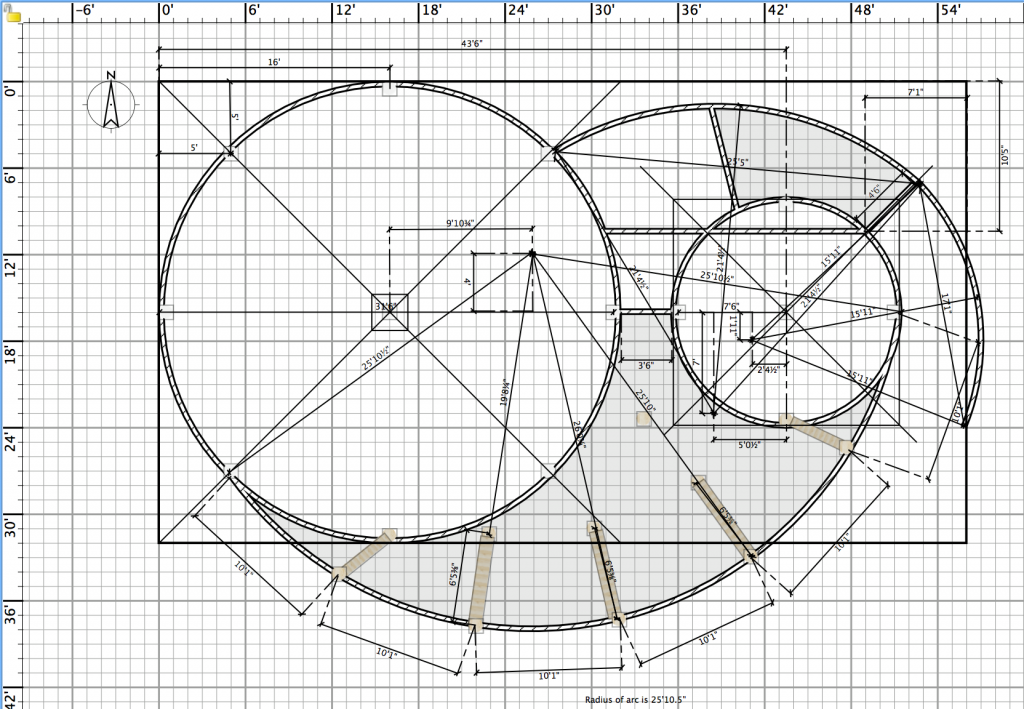 With theses numbers in hand, Eben and I were then able to go up to our site and mark out where the yurts and every support column would sit. This was a couple of days eyeing up the markings, and confirming that everything was where we want it. Then we could move on to the next step of building the forms.

But first we had to deal with the headache of our shipping container. 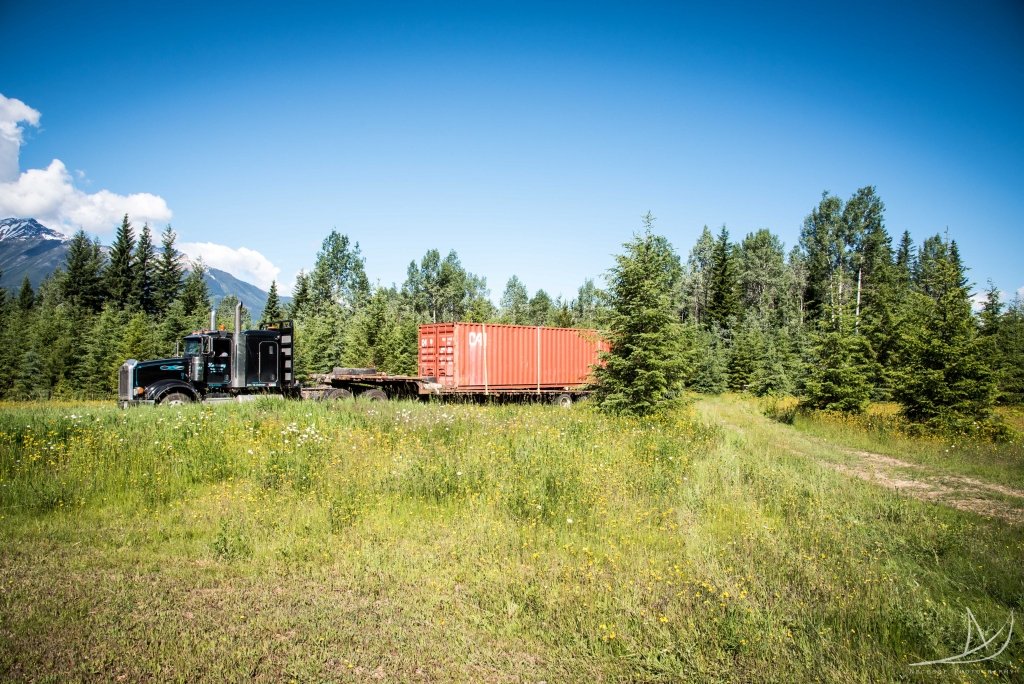 Before leaving Golden we had bought a 40ft shipping container. The plan was to incorporate it into our house build. We changed our minds on that. Instead we decided we would use it for storage.

But we still had to move this container from  where it sat to our property. Eben spent days calling everyone in town, trying to find someone we could hire to move the thing. It seemed that everyone either had the truck, or the picker, but not both. Or if they didn’t have either, they had the phone number of someone else Eben could try. His phone calls went in circles!

Finally Eben decided, screw it, I’ll do it myself. We hired a truck that could transport it to our property. But first Eben had to lift it high enough to get it onto the vehicle. With a little advice from his brother, Eben used log tripods and hoisted the one end of the container high enough that the truck could pull half way under it. Then they would use another crank to teeter it onto the flatbed and pull it forward. 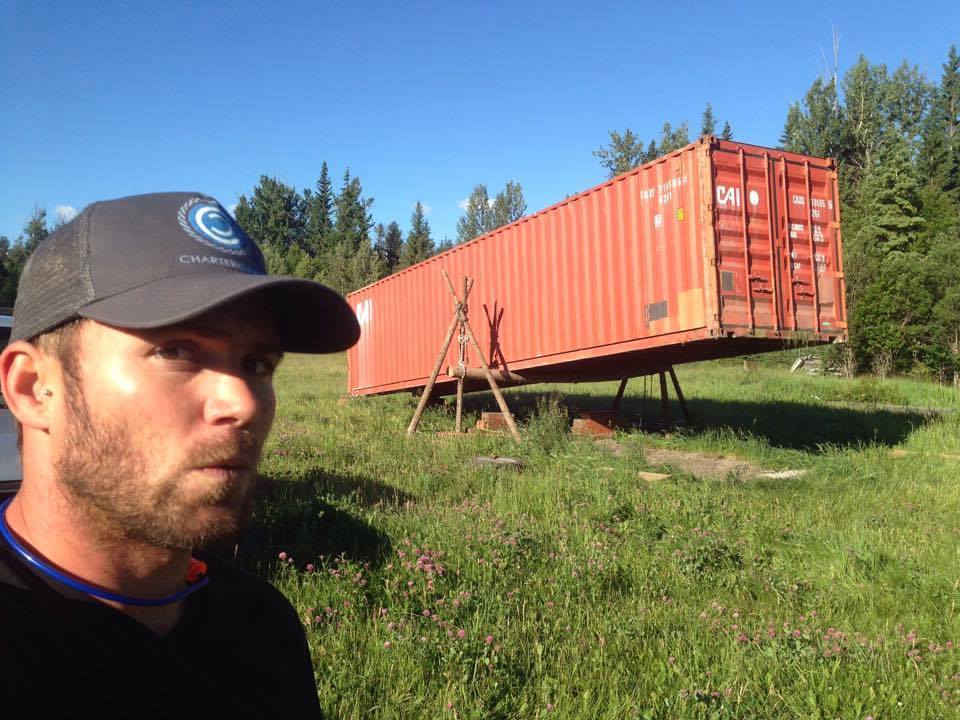 Once they arrived on our property, they chained on the end of the sea can to a tree, and the truck drove forward. Dropping the sea can in its new resting spot!

With that out of the way, we could go back to working on our build.

The plan for our 8ft elevated deck has 17 log columns and a systems room at the rear of the house. All of this needs concrete footings.

We checked online and there are prefabricated forms that one can buy, making this step quick and easy. But with 17 of them needed, it also got quite expensive. Instead we decided to build our own.

We spent two days, measuring, cutting, and screwing wood pieces together to create the forms we needed. When our 17 forms were done, Eben went to work at creating the form for the systems room…if you’ve seen our design, nothing is straight in this house! So he had to create a form that followed the same curve as the yurts that would sit above it. He levelled the ground where this room will sit and set to work building this weird shape.

I think one of the hardest parts of the form building process was dealing with the mosquitos. You may think I am exaggerating, but I’m not. They are horrendous. In all of our travels we have not encountered mosquitos that are this vicious and relentless. And there are swarms of them. It’s like they knew, that while I was holding the forms with both hands, so that Eben could screw them together, that I had no spare hands to swat at them. Heartless little suckers. 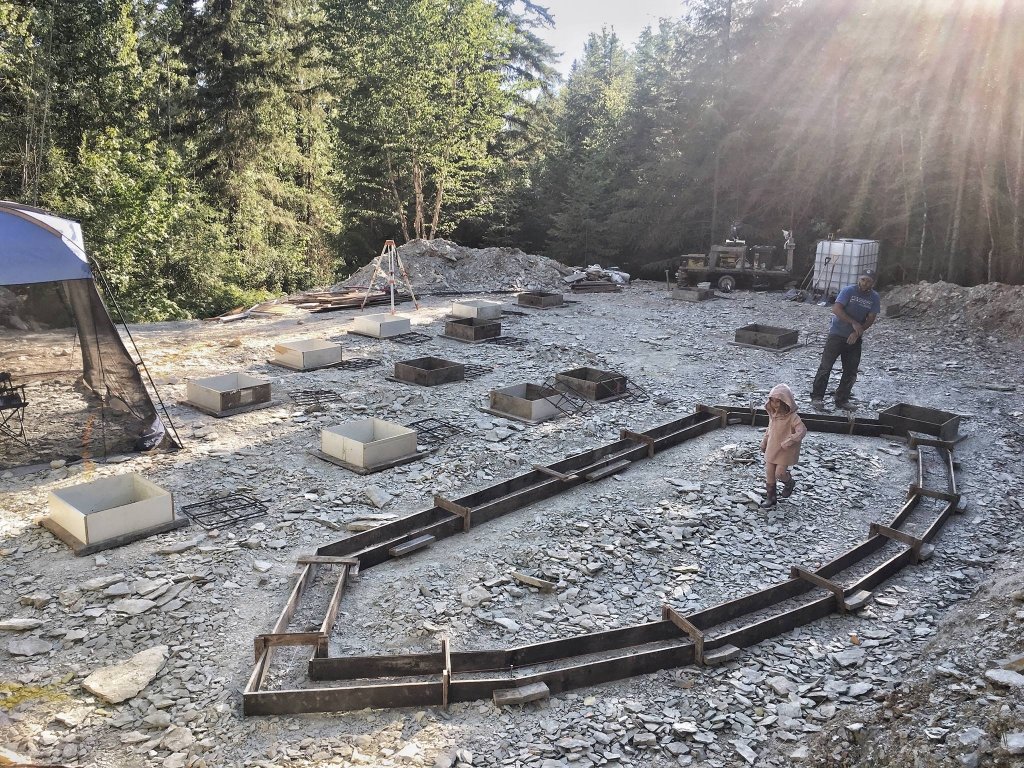 Inside each square form lies rebar. It needs to be cut, bent, and tied to size.

Luckily for us, a family friend of Jair’s had a rebar-bender and cutter that he lent us. This machine saved us a lot of time, and probably some pain. Eben measured and bent every piece. Then he handed them over to me where I sat doing the meticulous job of tying all the crossing pieces in place.

Eben had a brilliant idea. His parents own a large mosquito tent. We found it in their trailer and set it up on our work site. This way I could sit inside the tent and tie all this rebar without the swarms of mosquitos driving me nuts. Sitting still in the open air is not an option. This tent was the only way the job could get done in a timely manner.

The final rebar we had to do was for the tricky curved systems room. Eben carefully bent the rebar and we created the shape we needed to reinforce that form. We tied cross braces every three feet, and also tied in large screws to be used later when building the walls.

It was a pretty exciting moment when the final form was tied and done. This meant we were ready to pour our concrete! But of course, we finished all this work on a Friday, and the concrete truck we’re hiring can’t come out until Monday.

So in the meantime we moved on to our next project…cutting down and peeling logs! 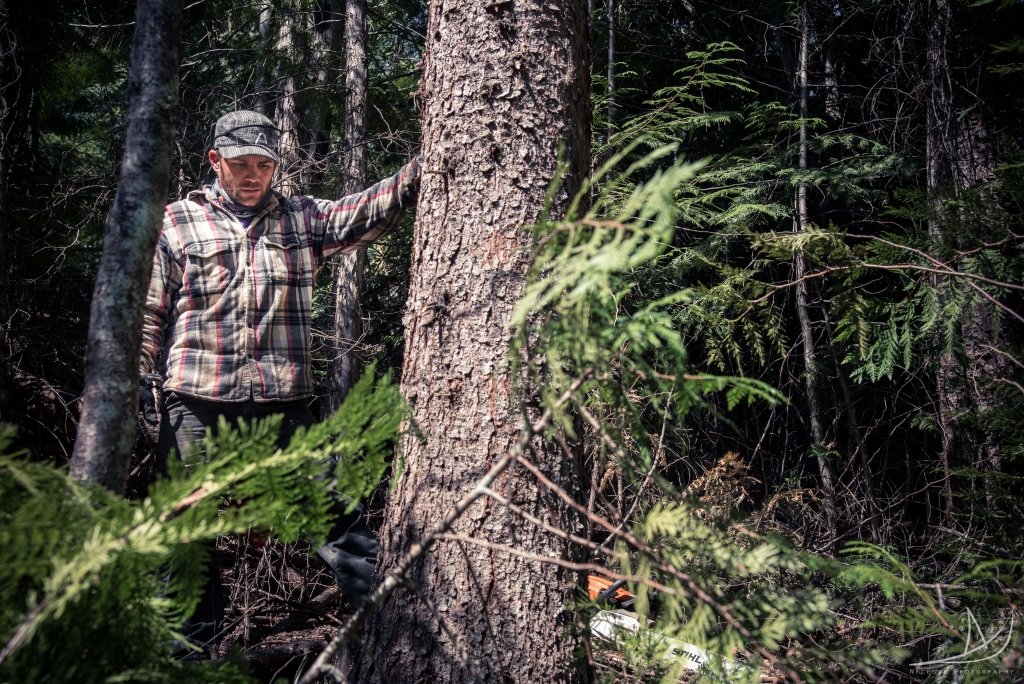