Home/House of Pain
Previous Next

Today we made it our mission to be painfully productive, literally.  We brought Ellia in for her immunizations and Arias in to get her cavities checked and potentially filled.
We brought Ellia to the local hospital, which is free of charge, for her 3rd set of shots. (Yes we are way behind. Odd because with Arias I was on top of it, but this time around I seem to be a little careless. Poor second child syndrome.) We met the nurse in her tiny title cubicle of a room to go over what shots were needed this time around. We found a bit strange that she didn’t remember us from two months ago. We realize that she probably sees many people here for immunizations, but really, how many gringos are there that are bringing their babies into the Luperon hospital for their shots. Anyways, I had to re-explain to her how far behind we are on her schedule, but at least this time around she didn’t give me trouble. Ellia took it well, she grimaced at having to take the polio med orally, and then let out that horrible heart wrenching scream when she got her needle, but settled pretty quick when she saw the lollipop we were bribing her with.
On to our second mission, Arias’ teeth. A quick walk down the paved but dusty streets of Luperon got us from the hospital to the dentist’s office. This is probably the cleanest and most western looking building in the entire town.
Arias inherited Eben’s weak enamel and porous teeth, which has caused her to get early cavities in her four back teeth even though we floss and brush everyday. We have known about these cavities for a while so we have been extra vigilant about her dental hygiene, hence why we were flossing and brushing her teeth rather than letting her do a half as*#d job at it. Before leaving Canada we had visited two dentists, one regular and one pediatric specialist, about her teeth and both quoted us ridiculous prices. We thought it over carefully and because of her young age and the fact that she never complains of pain, we decided to put off the dentist work for a little while.
Those cavities have only been growing since, and as of late we realized that we could stick the tip of a toothpick into one of them, it had become a small crater. It was time to get them checked again.
We walked into the dentist’s office today hoping for only an exam but when the dentist finally saw us she quickly assessed the problems and explained to us that she could fix all four of them for only $10 each. That cost was also for porcelain white fillings, not those ugly metal ones that I have. Our biggest  worry was the anesthesia, we didn’t want her to have to get the needle and have a permanent fear of dentists, but didn’t want to put her under to do the work either. The dentist assured us she could do it without any anesthesia  or pain. She decided to do one filling today so that Arias could gain confidence in her and her dentistry experience and then we could return the following week for the other three, and also because holding your mouth open while you get four cavities worked on can be long and painful for anyone.
As Arias lay in that oversized dentist chair, bib around her neck, letting the dentist and hygienist play in her mouth I had a rush of emotions pass over me; pride for my little girl being such a champ, fear for any pain she may encounter, and nervousness that we were making the right decision. We did. The dentist was quick and did great work, Arias didn’t flinch once, and she now has one tooth that is no longer problematic. And to top it all off, the assessment of how much this endeavor would shrink our wallet went from upward of $4000 in Canada to only $45 here (for all the work). We strolled home 15 minutes after entering her office, with a fixed tooth and smiles on everyone’s faces. After the daily noon o’clock nap, while i babied the skewered child, Arias and Papa dinghied back in for a reward Zapote Batida and Arias was quick to remind that the next visit to the dentist is for the other 3 teeth and that means three treats “right Papa!?” 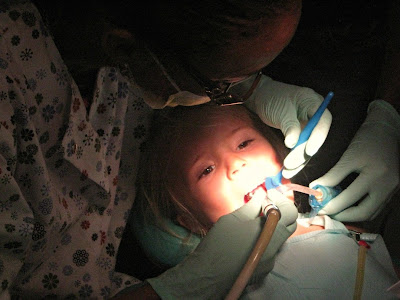 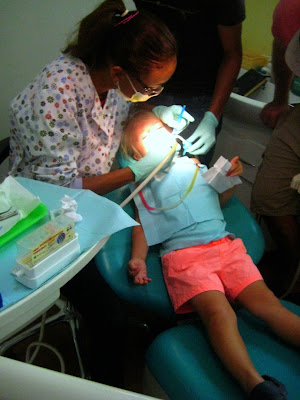