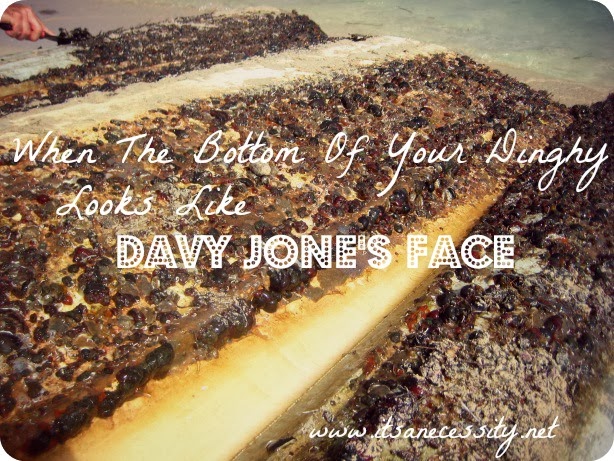 It has happened a few times since we have been in Luperon harbour, our race car of a dinghy started driving at the speed of a Chevette. Our dinghy is a 12ft Apex that was gifted to us in Georgetown, Bahamas as payment and thanks for some work Eben had helped someone with. When we got her she was in great need of love. It took Eben about 6 near full days to patch her up and get her functional again. And since Eben loves his spear fishing, and is a little impatient and could never drive at the speed of a 9.9 horse engine, we have a 25 enduro on the back of our dinghy. He bought that engine from a friend in Miami about 6 years prior, but keeps it well maintained. So when this combo started slowing to the speed of a 9.9 horse we knew something was up.
Eben pulled it up on to the beach two days ago, and there was problem number one, in plain sight, the Luperon harbour had attached itself to our dinghy in the only way it could. While I played with the girls, he went to work attacking the insane amount of slimy bubbly Davy Jones’ growth that had attached itself to our ride. This is by no means a graceful job. He stands over the dinghy pushing off the growth with a paint scrapper and they retaliate by squirting him in the face with their infectious goo. It’s dirty and rank, and I am hugely grateful that he did that job, I think I would be gagging and half laughing and crying the whole time.
Eben then took apart our engine and cleaned the spark plugs. They are both relatively new but our oil and gas had ran a bit rich lately so they could have gotten gummed up. Once his work was done he joined us on the beach for a salt water shower (to remove his stank goo smells and hang up his captain krill uniform) and to relax after having accomplished our job for the day.
The dinghy is ripping around the harbour much better but is not fully a 100% yet, but it is definitely a step up, and 10 minutes faster crossing the bay, than what we had been enduring before. 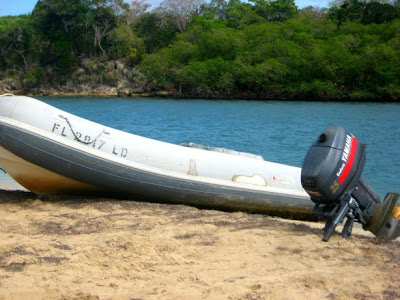 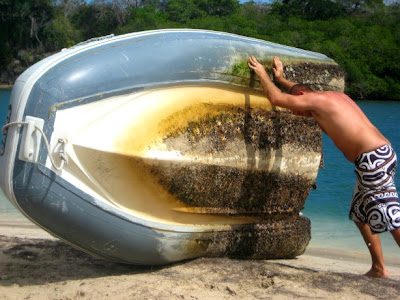 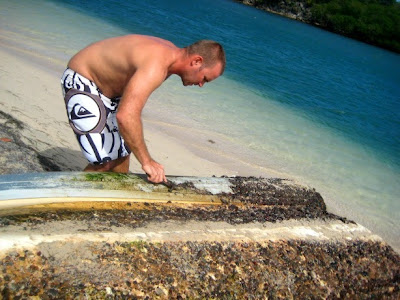