I don’t know if she is just way braver than me (Eben says yes she is braver than me), or if she simply has no idea, or if its because she can’t have a pet on the boat, but Arias is always finding herself little critter friends. She doesn’t even care if they are alive. If they are, or used to be, an animal or bug she will take them as her new BFF. And she is not biased when it comes to her critters, her list of friends includes centipedes, worms, caterpillars, spiders, ladybugs, soldier crabs, regular crabs, fish, lizards, a dead cockroach (gag), snails, slugs, a wasp ( I made sure that one never happened again), starfish, jellyfish, and probably a few others that she kept from me, probably best.
Yesterday it was a dead spider that she entertained herself with and today it was a tiny crab she found at the beach. It’s usually the same routine where she finds it and then carries it around in her tiny cupped hands showing anyone that will pay attention to her and then trying to get me or Ellia to hold it. I casually turn her down, as I have no desire to be holding creepy little things that could crawl all over me (I am not a bug person, can you tell?), but don’t want to deter her in her fascinations. So I try and be as nice as possible when I tell her that I don’t want to touch, hold, or feel her little friend. Ellia on the other hand is less tactful, and has less of a vocabulary, so hers is just a straight up “NO”. Eben encourages her brave exploratory behaviour, and so do I, but mine is in a more passive way, where as he is helping her find all these creepy crawlers, getting her to eat termites (hers tasted like a leaf, his a carrot).
Once she is done sharing her friend with everyone she will usually retreat to her own little corner of the beach or bar, yes a toddler in a bar, it’s the Dominican, it’s ok, and play alone with her friend fully entertained until either it runs away, she has loved it to death, or we make her say goodbye to it. It’s entertaining watching her talk to her critters, getting them food and shelter, and telling them how much she loves them. I keep telling myself that this fascination may lead her to an interesting career path, marine biologist, scientist, entomologist, or possibly a mortician. And reminding myself that playing with dead bugs doesn’t necessarily mean she will become a serial killer. She couldn’t be, she’s too cute.
Another reason I don’t mind is because it keeps her busy for a solid half hour each time. That’s time that we get to relax and only have one child to entertain. Today however, she almost made me want to crawl out of my skin, or rip off my bikini bottom to say the least. I was in the water playing with Ellia while Arias sat on the beach with “Leet the Crab” when all of a sudden I felt her little fingers push into the back of my bikini bottom. All morning she had been asking me if I wanted to put the crab on my shoulder, on my leg, on my foot. In that moment I swore she had done the unthinkably absurd and decided that a good place for the crab would be in my bum crack. I whipped around and screeched at her, only to see that the crab was safely nestled in her other palm and she was merely trying to tuck the tag on my bathing suit back in. I quickly apologized and explained to her why I jumped like that, but after that moment I kept an eye on her little friend. 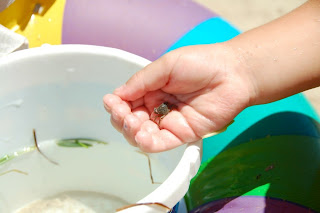