Today’s
Splurging highlight was not the chocolatines, croissants, and cream cheese
pastries, nor was it the early morning daiquiri, nor was it the TWO new dresses
I received for Mother’s day in the DR, nor the Irish fish and chips. It was
actually the excursion to the Monkey Jungle.
Although
this place was rather expensive we decided to head out and take the girls for
an up close and personal experience on a monkey sanctuary. And now having done
it, it was worth every penny. Monkey Jungle is an NGO (non-governmental
organization) who’s proceeds are used to support their free medical and dental
clinics for the locals. It is home to 15 Squirrel Monkeys and 6 Capuchins, 2
Macaws, and some other random animals such as turkeys, rabbits, and peacocks.
They offer zip line tours, monkey tours, and oddly enough, a private gun range.
We took
part in only the monkey tour, where they take you into a gigantic fenced off
area where the squirrel monkeys descend on you from every direction to snatch
away the fruit that you have at hand. In minutes you are being swarmed by these
little guys with human feature and tiny hands. They climb on you, jump over
you, and will even sit on your shoulder while feasting away at tiny pieces of
mango. After this you are brought to another enclosure where they keep the
Capuchins. These ones however are kept enclosed because they were rescued from
abusive backgrounds and are a little aggressive at times, but still extremely
cute to interact with, at a distance.
The best
part of this excursion was seeing the expressions on our girls’ faces as the
monkeys climbed on them, ate from them, and interacted with them. Arias was a
brave little girl and let the monkeys do whatever they wanted, even when they
tried to take her necklaces and the flower on her dress. And Ellia lit up as
soon as she saw them and didn’t seemed phased at all to have these little
critters climbing all over her. Her biggest concern seemed to be whether to
give up the fruit to the monkeys or eat it herself.
We loved
the experienced and wish we could’ve stayed longer, but unfortunately we had
arrived right at closing time and they took us in only to accommodate us. So
tomorrow we are returning to partake in their morning feeding where apparently
they are more active than ever. 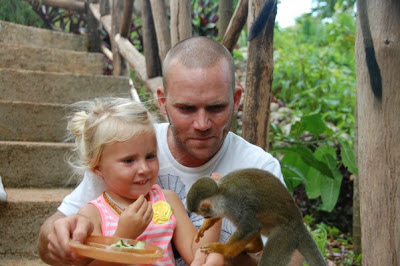 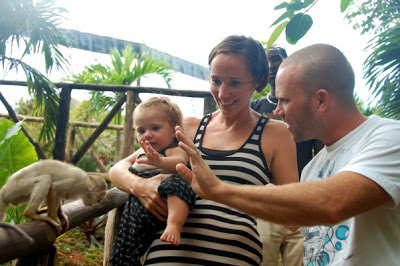 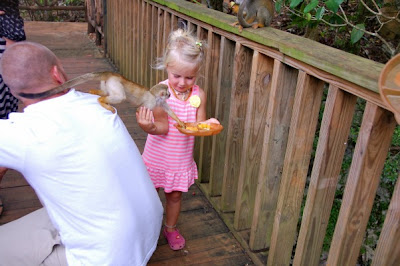 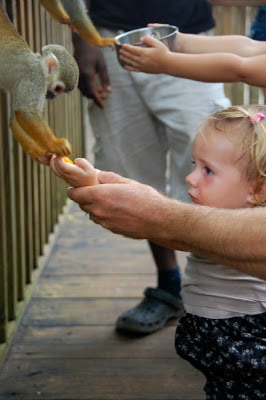 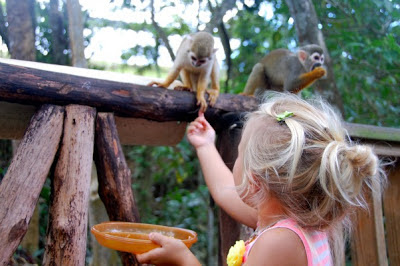 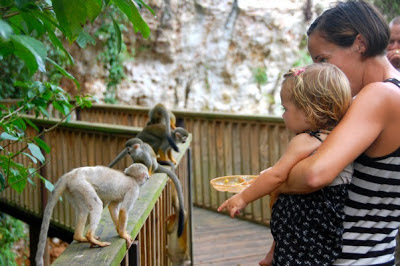