Non-Boaters In Charge Of Our Boat!

Home/Non-Boaters In Charge Of Our Boat!
Previous Next

Non-Boaters In Charge Of Our Boat! 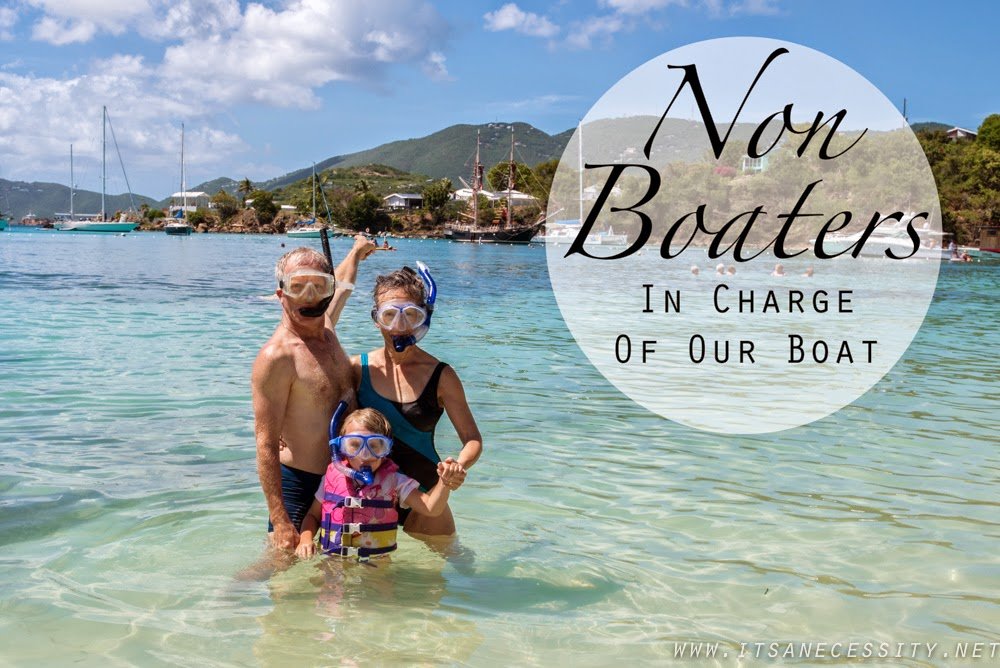 Go back to about a month ago and I was getting these small anxiety attacks, my day would be going fine, and then boom, the stress levels would surge. My worries were related to the Rickshaw Run that we were about to participate in, but not with the run itself, but more to do with leaving our kids behind, on our boat. Although Eben was all for the idea of taking the girls with us to race across India in a rickshaw, we knew that common sense clearly said otherwise. You stick a 3 and 5 year old in any vehicle for 10-12 hours on end and see how they behave…now multiply that by 13 days, take the doors off the vehicle, reduce its driving speed to 50km/hr and throw in some rain and sand storms. No Thanks!! There is no way I would want to endure two cranky kids for two weeks straight.

It just so happened that our desire to throw ourselves into the Indian-unknown was perfectly timed with Eben’s parents wanting to spend some more quality time with their tropical grandbabies. Perfect. But then came my stressor. What do you do with two non-boaters on a boat that also have the extra duty of caring for your kids. The plan was his parents would come down for a week before our trip to India, get acquainted with our boat, and then we would fly away, leaving them as temporary captains for three weeks.
I started a mental checklist to see WHERE would be best to leave our boat for them. The tricky part is they only got an “emergency” crash course on how to motor our sailboat if anything extreme were to happen, but otherwise the boat should stay where we left it. So my checklist looked something like this:
-safe/good weather protection?
-access to grocery store?
-access to water?
-access to other boaters in case of problems?
-close to a beach or playpark? (to keep the girls active)
-not too $$$?

Of course the first thing that anyone would say is to put them in a marina. But the cost of that (on top of the already large cost of our India escapade) was big enough to make us shy away from it. And the grandparents wanted their own adventure, of living on a sailboat, not living at a dock. So forget docks. And even though there are a ton of places that we love in the Virgin Islands, there weren’t many that hit all of these criteria. The weather was especially tricky because every boater knows that the weather can flip at any given time and your calm anchorage can turn hellish. I rather love my inlaws and didn’t want to abandon them in that sort of place. As viable anchorages fell short of my list of expectations we narrowed it down to two: Charlotte Amalie or the Bitter End. From there we decided on Charlotte Amalie due to its accessibility to everything and finding out, at the very last minute, that there were 3 boats we knew that would be staying there as well the entire time we were gone and they could help out if needed.
With that we anchored them in, told them that the bay is not always this rolly, and flew off the next day. (Ends up the anchorage stayed roll the entire time, but they were rockstars and got their sea legs.)
Once we were gone, we were gone. We originally had thought we would do lots of Skype dates with our girls but sadly our internet connection while we were in India was below par, and trying to get our time zones aligned with that of St Thomas was a bit confusing. Instead of face to face chats, we instead fell into the groove of sending little love messages and pictures back and forth. Tom and Diana-Marie, Eben’s parents, did a phenomenal job at caring for our girls. In every picture the girls looked so happy. No one was missing a limb and crying terribly. There were no messages that our boat had exploded or gone adrift. There were only smiling boat babies. We will be forever thankful for the time they spent with our girls, loving them on our behalf, and spoiling them like every grandparent should. We came home to daughters who constantly confused our names with those of Meme and Grandpa, to tons of new songs that they had learned, and to two girls who extended their love and attention evenly over every adult onboard. Even after our return the grandparents continued to care and play with the girls whereas they very well could have offloaded the girls on us, but they didn’t. They were (are) amazing. Thank you. They loved our babies when we were too far away to do it ourselves and gave Eben and I our 2nd kid-free vacation.
Now we know that they can all handle it and we can turn this into a yearly thing 😉 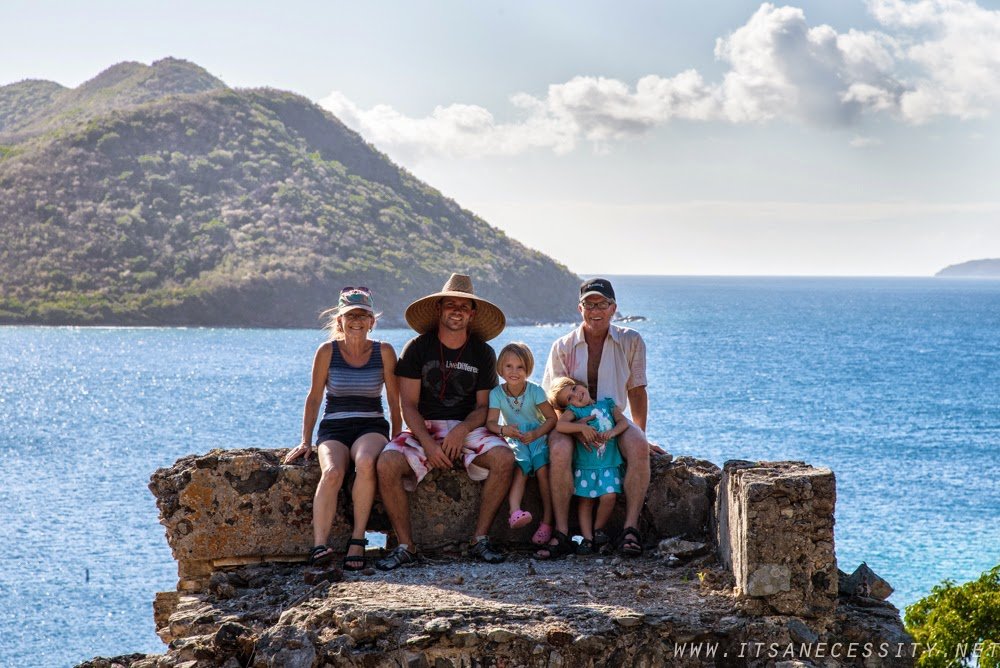 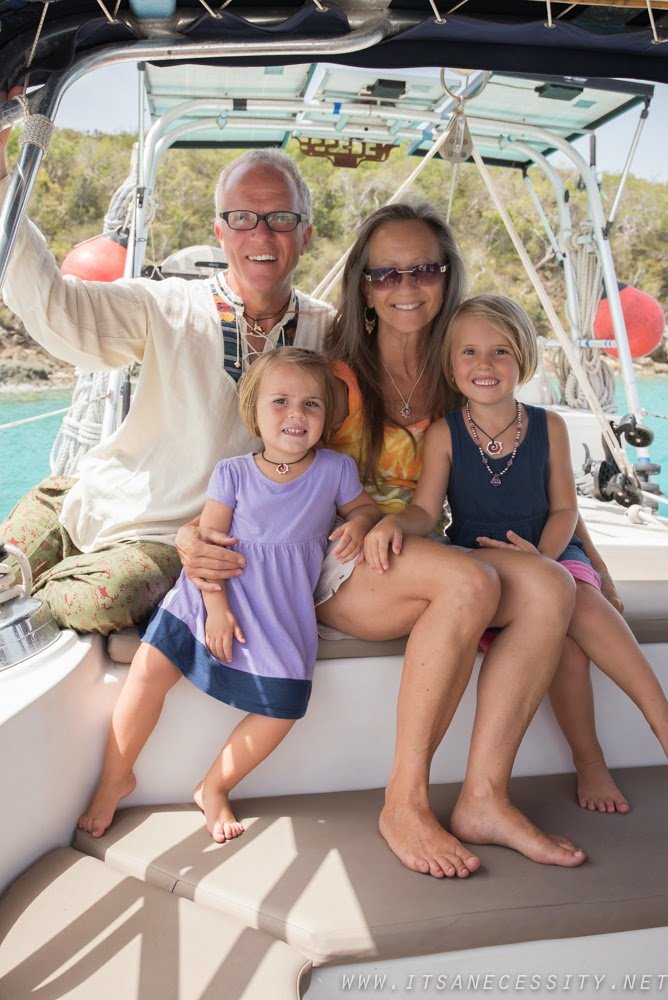 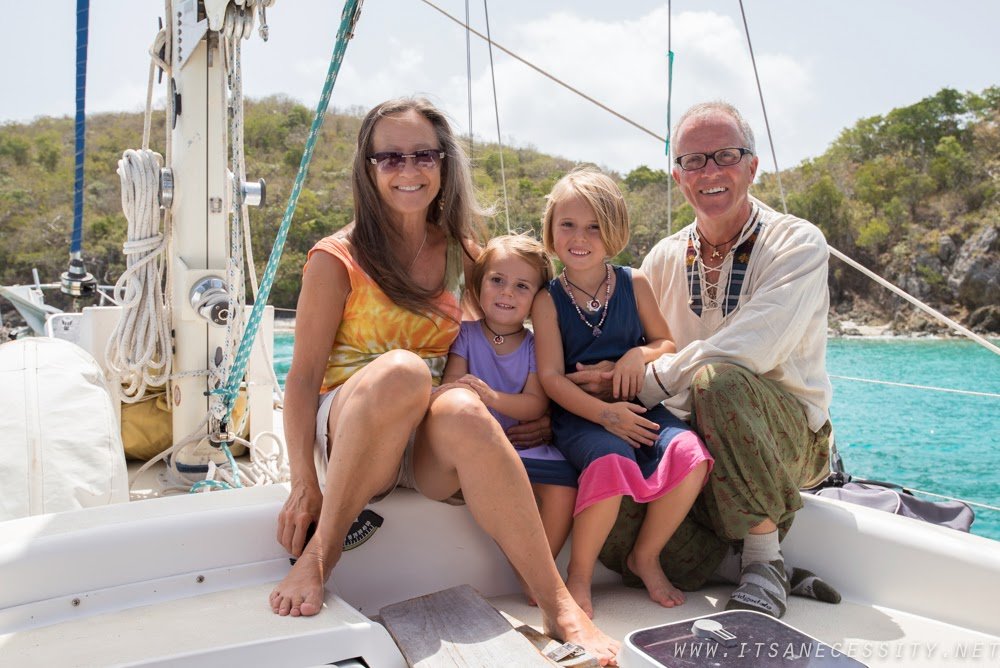