Home/Not For Resale
Previous Next 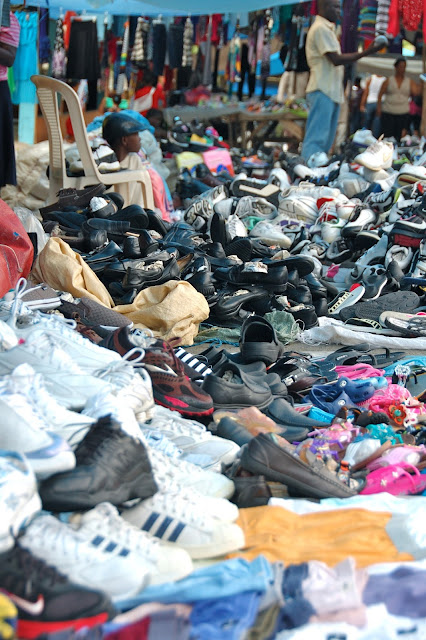 Yesterday we took a stroll through the bi-national market in Imbert. Bi-national being that the vendors were both Dominican and Hatian, but mainly Hatian. The street was packed on either side with tarps both above and below. Directly on the street the vendors lay tarps down and place their treasures on them in a very organized manner, outside of the clothing. The clothing vendors simply throw the entire pile of clothes on to a tarp and it is a free for all in there to find what might fit and look good on you. Walking down the street you have to watch out for the low flung tarps, that keep the sun off of the merchants and buyers, and also for random motorbikes that think its a good idea to try and drive through the market. The items for sale range anywhere from shoes to kitchen ware, and everything in between, both new and used. (And even some items are marked “not for resale”). Everything is negotiable, and for a gringo there is a long way down from the original asking price before you get to its true value.
We got two pairs of shoes. One pair of barely used Crocs for Arias since she was busting out of hers, and one pair of Toms for me. How did we know they were authentic, the crocs had the actual crocs buttons on the straps, and the Toms, they had all the proper tags and on the inside was written “One for One” “Not for Resale”.  Both pairs of shoes together made for a total of $400DR pesos. ($10 USD)
** If any of you have bought a pair of Toms before you would know about the One for One program. The owners of Toms created a program that, whenever a pair of their shoes is purchased they also donate one pair to an organization that distributes them to the needy in a developing country. It seems that there are more than a few people here that decided they would much prefer to have money to put food on the table than to have a pair of Toms shoes, since the market had at least three different vendors selling them.**
I had mixed feelings about buying the shoes. 1) I really want them, and they are cheap. Yay!  2) I feel bad for this company that has created such an amazing program to give shoes to the needy, that now have their product not being used for what they were meant for.  3) This vendor obviously has no desire for Toms and would prefer having money instead. Money that I have, so why not make a deal. In the end, after some bargaining, her and I both got what we want. 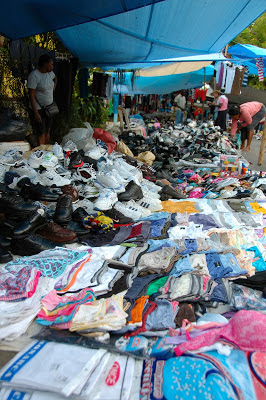 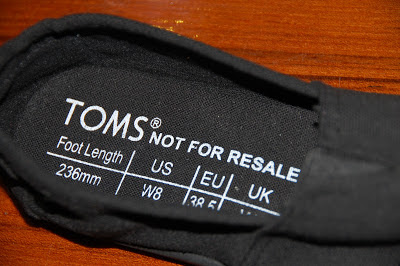