Live Aboard vs. Work Aboard

Home/Live Aboard vs. Work Aboard
Previous Next

Live Aboard vs. Work Aboard

Alright.
So I am finally conceding, sitting down, and writing my first entry for our
blog. Genevieve has been after me for weeks to put an entry or 2 in on the
site. After she realized that the regular “when are you gonna write a post?”
was proving to be ineffective she moved on to attempt to entice me with “how
bout we just make it Wednesdays With Eben”…. nothing. “we could always do
Technical Thursdays”…nothing. “Technical Tuesdays??”…“you know Fabrication
Fridays sounds better anyway”, “K how bout this… Spectacular Saturdays?” I
started to think she just thought that I had some sort of alliteration fetish.

See the
thing is that living on a sailboat is not at all that which we have been
persuaded to believe it is from Hollywood, or come to understand from that
beautiful song about sailing that has been sung by every band that has ever
made a hit album. No, in fact, that dream is really what all us sailors are in
search of and yet only get glimpses of every now and then. A superior section
of the sojourn simmers down to a lot of scary, stressful and strenuously situations.
(K maybe a small fetish.) And at the end of the each day I find it very
difficult to muster up the energy to want to write about all those things that
just took up all my energy. But it has been asked of me a few times now by more
than just my beautiful wife, that I share a few of the discoveries that I have
made or been taught along the way.
So here
it is! The first of many entries that will be devoted to ideas, knowledge, realities,
problem solving, teaching, and embarrassment (because believe you me I have
learnt the hard way many a time).
Let the
first post be titled “The difference between “Live Aboard” and “Work Aboard”.
Naturally
it can be guessed that we fall into the latter of the 2 categories. To make it
a little clearer:
A “live
aboard” is a boat sailed to destinations with upwards of %80 of the boats systems
functioning at any given time.
A “Work
aboard” is a boat sailed to destinations with upwards of %80 of the boats systems
still in the box, or in raw material format with plans to be installed or
created.
Needless
to say there are less “work aboards” then “live aboards” in this neck of the
woods because once you leave to comfort of the northern Americas, you either
have to be an expert DIYer or become one real quick! And most people aren’t
foolish enough to leave western civilization without the majority of there boat
in working condition. Somehow I missed that memo. And that is what I want to
chat about in the upcoming blog entries. Different things that I have learnt or
made up along the way that may not be as beneficial to the veteran sailor but
sure as heck would be considered valuable for the project boaters, and the
financially impaired.
I’m
going to write about projects and designs and so forth that may or may not be
“boat standard” but anything that gets put down will be something that I have
tried and tested myself. Feel free to comment or give ideas and please tell me
if you think my boat is going to blow up because I overlooked a critical
reality. It happens here and there.
Consider
that the intro for the once a weeks, or maybe biweeklies, with Eben and the
next blog is going to be “The Mandatory Tool Box”.  If you’re a “work aboard” I can guarantee your gonna need
these if you don’t already have them.
Standing by on Dominican ch 68.
Over eezer and out
019
54.09 N
070
56.90 W 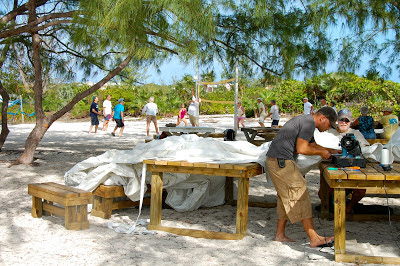