When we refitted the boat we bought the regular hand pump jabsco toilets but splurged on buying actual Sani+ hose for our back head (toilet) because we wanted to avoid smell at all cost, since it is right next to our bed. We hooked it all up and never came across an odor issue. Now we know we could have spent a fair bit more and bought a toilet with better reviews, but we figured even if we had to replace the Jabsco ones every year it would still come out to less than had we gone with some of the other options on the market. (And so far they have survived two full years.)
When it came to odor, the front head was a different matter. We didn’t hook it up until only a few months ago, because instead of using the front head as a toilet we used it as storage space, better known as our “West Wing”. However, with our constant flow of guests here we thought that maybe it would be time to get the front head working as well. We cleared out the space and hooked up the toilet, with regular Sani hose this time. From that point on that toilet always had a smell. Ick. It was rather embarrassing. We even felt that the odor seeped through the walls and could be smelt in both the vberth and on the adjacent settee. I tried a number of different deodorizers to try and mask the problem until we got around to fixing it, but all smelt like public washrooms and were rather revolting.
Through some trouble shooting Eben figured it was because our intake and outtake thru-hulls for that head were too close together, thus when you were pumping out your “business” it was getting sucked right back in the intake hose.  Eben spent an afternoon scraping his knuckles and fighting with hoses in confined spaces to connect the intake hose to another thru-hull. If you have ever worked with toilet hosing you have discovered that they fit extremely tight to their fittings and are near impossible to hook on. A trick that we learned along the way is to heat the hose, making it expand a little, to place it on its fitting and then when it cools it synches down to the perfect fit. The best way we found to heat those hoses is with boiling water. Boil a pot of water, place the hose in the water for a few minutes, et voila. Much easier and efficient than a hair dryer or a blow torch.
With the new intake location the odor has diminished immensely and now I no longer have to scour the shelves of every store to find the perfect odor eater. There is still a tiny smell there and that could possibly just be the difference between the Sani hose and the Sani+, but with proper ventilation (opening the bathroom hatch) it is not noticeable at all. This I can handle. Another project accomplished. Thank you Eben. 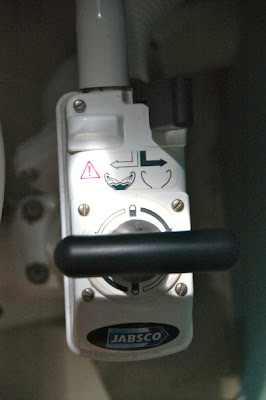