Since Tropical Storm Chantal didn’t let us get too far last time, as soon as she had passed we picked back up where we had left off. We skipped through Cabarete and went straight for some beach side cabanas right off of Yagua. We were at “Los Gringos” only minutes when our minds starting reeling about how this is the type of place we would love to own. Its secluded but not too far out in the boonies, close enough to get tourists but far enough to be able to disconnect. Patrick, the owner, answered our every question about his endeavors and how he got to where he is now. He currently has three huts on a private beach, a restaurant, and has started construction on an apartment for when larger groups want to stay. The cabanas are simple but offer everything you could want when on a “getaway”, hot water, Internet, beds and daybeds, and a hammock on your front porch. The beach there is calm so we could let the girls roam free while we enjoyed some wine and tossed around some ideas about our future. And of course, the food was delicious and the portions huge, we even had leftovers from our complimentary breakfast. This place got us all excited about the prospects of owning a place in the jungle, with a few rentals, and a restaurant, just enough income to sustain ourselves. Just enough so that we could keep living in a foreign country with both parents “at home”. Of course owning a place like this is an endeavor but we are definitely looking at the positives, building our own dream home, working at something we enjoy, having enough jobs to keep eben’s idle hands busy, raising our girls abroad, and catering to other travelers living their dream. From this place on we were pointing out every “Se Vende” sign along the road. Thank you Los Gringos for a great stay and an exciting beginning to our road trip. 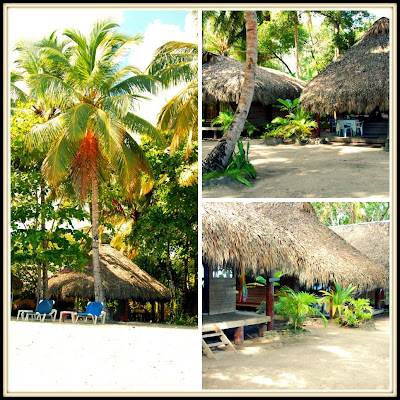 From the huts we moved on to the Dudu Blue Lagoons (not the best name I know) but for merely 100 pesos each we got to swim in the lagoons. This place even has a zip line that runs above one of the lagoons where you zip out and release yourself for a fall of about 25 feet into the lagoon below. It took some coercing but Eben got me to do it. It had my hands shaking at first but was exhilarating once I was flying through the air and into the water. I hit the water properly and didn’t hurt myself, however not everything stayed in place. . . mental note, zip line jump not the best idea when wearing a bikini. Eben then continued on to jumping off a few cliffs into the water, while I tried to calm Ellia who was throwing a fit because she was not allowed to do the zip line. I’m in trouble, we have a baby adrenaline junky on our hands, she really would not settle down and just kept pointing to the zip line and reaching for it. 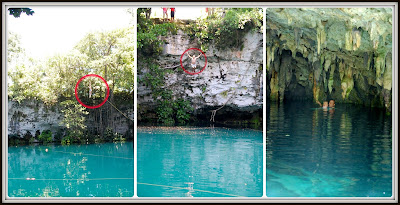 Our next stops were based on the “Must See Places” listed in our Lonely Planet book.  We started with Las Terrenas, where we settled into El Rincon de Abi. This town is very split. When driving down the main road you seem to be entering a dominican pueblo like every other, fruit shacks every few doors, people out in the streets talking, people sitting by their front door watching the day go by, kids running free, motorbikes criss crossing, and loud latin music creating a soundtrack for it all. But all of a sudden you cross an invisible border and then you are in a touristy town. The street is now lined with shops, not shacks, it has cafes not street vendors, and whities abound. It also seems to have quite the night scene, but since we have children and had our heads in the clouds dreaming about our Jungle Lodge, we took one brief stroll around town and spent the rest of the evening hanging out around our hotel’s pool. One night was enough for us here, had we been child-free we may have stayed longer, but with our current scenario we chose to move on.

The next morning we continued on to Las Galeras. We had a few hotels on our list to check out, one having a treehouse, but once we arrived we discovered that the top three I had found were all closed down for the season. We spent the rest of our morning driving to every single hotel in town, checking them out and secretly getting ideas of how we would want to set up our own place. In the end we chose the cheapest, and first place, we visited. Once unpacked and were fed, yes we were all a bit “hangry” (hungry+angry from lack of food) after all that driving around, we set off to Playa Rincon, another Must See in Lonely Planet. It was fun to spend some time on the beach but if this is supposed to be one of the DR’s must see beaches I am sad for this country. There is nothing tremendously special about this beach and I would venture to say that we have come across better in the country, but we still had fun dipping our toes in the Rio Frio which runs behind the beach and building mud puddle holes with the girls. That night and the next morning we strolled around town, a quaint little place with a little touristy flair. This town, and by town I mean one intersection, feels like the place to run away from the world to but still be able to eat your regular foreign foods from places like the boulangerie, the French bistro, and the American fare in the center of town. Over breakfast we, oddly enough, struck up a conversation with none other than the author of the lonely planet guide that we have been following around, he is back in the DR doing updates since the last edition is now 3 years old. After our food we packed up and headed out again. We left the coast behind us and headed inland towards the mountains of Constanza. We were excited to see if the mountain land would be as appealing to us, for our dream purchase property, as was the coastal jungle. 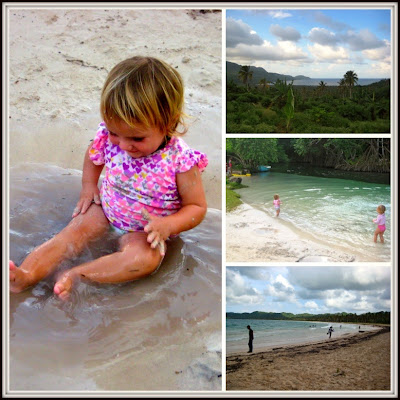 The drive into the mountains was absolutely beautiful and we had great hopes of doing some wonderful hiking while here. And then our car went BOOM. Since then we have been staying at Rancho Constanza, trying to keep busy and keep our thoughts away from our broken car. Although this hotel is a bit pricier and we are sort of stuck here, at least it comes with a playground in the backyard, which has kept the girls occupied. We walked into town on our first day and discovered the muddy streets of this pueblo. It seems very similar to other dominican towns except there is an abundance of fresh fruit and veggies being sold, the climate is much cooler, and the streets a just a tiny bit dirtier because of the extra rain and mud they get coming through here, being a mountainous town. What sets this place apart from the others is the surrounding mountains that are either occupied by fertile agriculture fields or the pine forests which replace the regular palms we normally see. 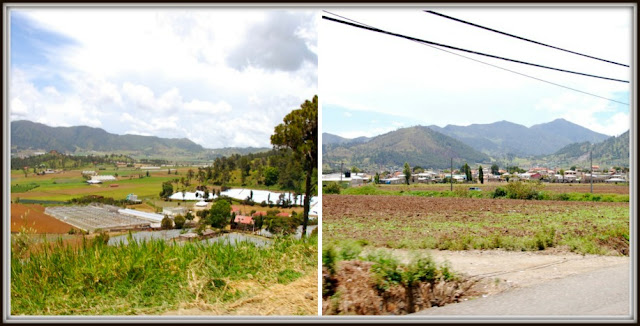 Today we took a guided tour (because we don’t have our own car) to visit Salto de Aguas Blancas. The drive in was a bumpy one swerving around potholes and rocks through the constant fields of fruit and veggies that adorn the mountain sides, full of Hatian workers tending to the crops. After an hour of bouncing around and picking up random workers needing rides up into the mountains, we reached the trail head towards the top of the three waterfalls. Eben had Arias on his back, and I had Ellia on mine. Of course once at the top, Eben jumped into the freezing pool of water at the foot of the top waterfall, against the guides wishes, but he just had to do it. We visited all three and enjoyed the vistas of the mountain tops. After about an hour of hiking we were back in the truck headed back towards town where we finished our excursion with a delectable local treat, strawberry smoothies. We ended up buying three because the girls were being smoothie hogs and drinking them all to themselves. 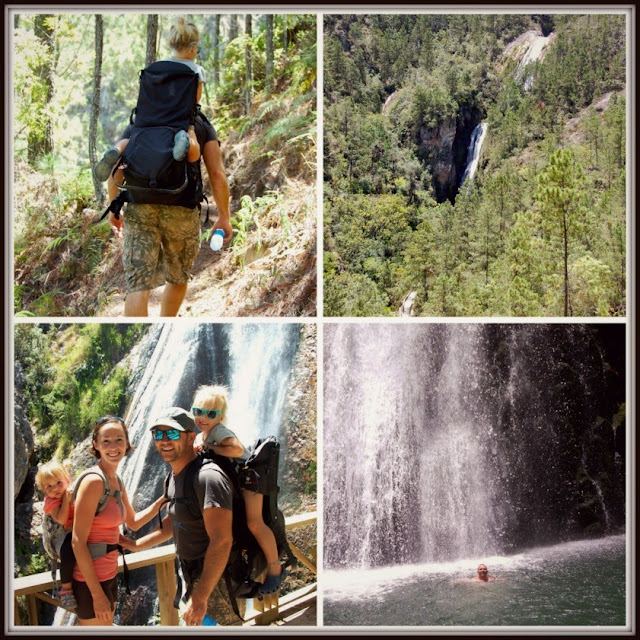 With this roadtrip we have seen a few different terrains of the DR, but our favorite stretch of land still remains the seemingly barely touched costal land between Cabarete and Cabrera. We hope that tomorrow we will get our car back and she will now run perfect and we can continue on our road trip, which is now the hunt for the perfect property. We don’t know if we are merely dreaming, or where our lives will be taking us, but to dream is definitely fun, that’s how we got to where we are today.