Home/Playing Santa Claus At The Baseball Game
Previous Next 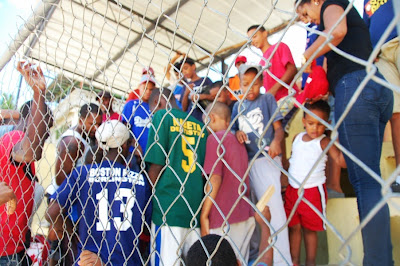 Last week we got to visit with family that we had not seen in years. It was absolutely wonderful reconnecting with these childhood buddies and teenage accomplices. There were greatly missed, but it felt like we didn’t miss a beat, everyone immediately fell back into their old selves, teasing, laughing, and spiking each others drinks.

One of my cousins and his girlfriend, James and Kendra, who are very implicated in their baseball community back in Canada and have three boys of their own, brought three bags full of baseball paraphernalia, toys, and coloring supplies to give to Dominican children at a local baseball game in Punta Cana. It was a super kind gesture of giving on their part, but also a very impressive one on the part of their sons who donated their personal baseball jerseys, gloves, and pants for the children. Unfortunately the DR water, or food, (or the all-inclusive drinks, I still suspect) got to their bellies, and the morning planned for the baseball visit they were incapacitated, maybe James a little more than Kendra. So their bags of goodies got passed on to us to play Santa Claus with in Luperon.
Every Saturday morning in Luperon there is a Gringos vs Locals baseball game where many of the town kids attend. The young boys sub in as runners for many of the Gringos, because let’s face it, many of them are bit past their prime to be running bases in the hot sun, and the kids get rewarded with cold drinks at the end of the game. We figured this was the best time to hand out the gifts.
Giving gifts in such a way is a bit of a double edge sword, you get that warm and fuzzy feeling inside when you get to see all of those ecstatic children and how happy you made them, but there’s also the opposite side where from the “outside” we may look like the Gringos with abundant amounts of money and may get hassled from now on. Lets hope the latter does not arise from this good deed.
We chose to give all of the gifts to the coach and let him hand them out, deciding who needed what. Am I ever glad we did because it became a feeding frenzy of children and their parents all crowding around the coach yelling at him in a bidding war of who needed what most. The circle of people kept getting smaller and tighter to the point where Ellia was crying and screaming, Arias was getting crammed into my legs, and I decided it was time for us to make our escape from the crowd and watch from the outside. And the group did not mind our retreat as it gave them the opportunity to get two steps closer to the coach, Mr Santa Claus. Once the jerseys, baseball pants, and mitts were handed out, the kids huddled together for picture for my cousins.  As the kids dissipated we took on the smaller crowd of kids left over that had not received anything, mostly the youngest boys and girls, and gave them the coloring books, crayons, play dough and toys.
Arias had a blast being a little helper and handing those gifts to the smaller kids and taking pictures with all of them. I have a feeling that after this stint she will be little miss popular with the town kids.
My cousins made the day for many of the young boys who no longer have to wear pants that are too short, or who are sharing gloves with their buddies, and who play this sport that they love from the day they learn to walk. Thank you James, Kendra, and the boys. 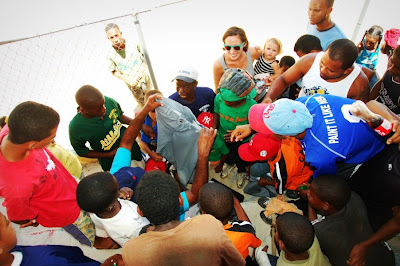 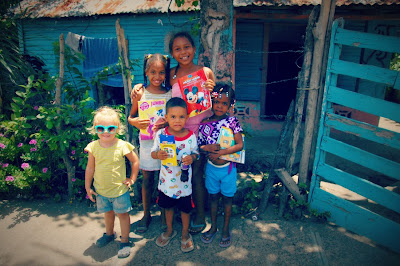 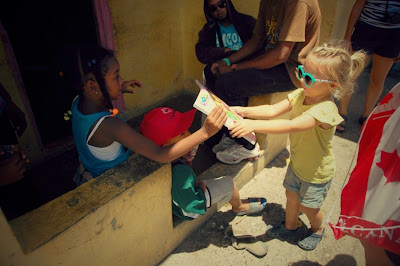