Eben said it perfectly today, “I’d rather get laughed at tomorrow (about our storm prep work), than get caught ill prepared”. In cases such as this we much prefer being overly prepared than be scrambling and stressed, or even in danger, for something that could have been prevented with better preparation.
A few days ago we set off on a roadtrip to discover some of Dominican Republic’s northern coast, but after only one day away we caught wind of Tropical Storm Chantal that was forecasted to go directly over Luperon, where we had left our boat, our home, behind. From that point on we checked the weather every few hours for updates. We hoped the storm would change its course and we could continue on with our trip. But as the next day passed the storm was still set to head our way. We decided to turn our car around and head back to Necesse. We knew that even if the harbour we are in didn’t get hit too bad and we continued traveling we would not be enjoying ourselves because our heads would be elsewhere, full of stress of not knowing first hand what was going on. After the hour and a half drive, during which we devised our plans A, B, and C depending on the storm outcome, we were back on our ship and getting her prepped for the worst case scenario.
Eben got to work. First the bimini came down, the windscoops were off, things on deck were stowed, the sailpack was tied down, the gerry cans were filled with gas, the anchor was prepped for deployment, and then he did the unthinkable…Eben braved the rumors that touching the Luperon bay water will instantly give you a staph infection, tapeworm, and cholera all together, and he dove in to check on our mooring. He came out relieved to say that everything down there is oversized for our boat and will weather this storm.
We took a break and went to town for supper, where we continued to watch the weather, and to our slight relief, it is currently forecasted to be moving south of us rather than the earlier proposed direct hit. Chantal should be passing the Dominican Republic around 2pm Wednesday. For the moment Plan A is to continue checking the weather throughout the day tomorrow, if it stays at its current prediction we will all stay on the boat and bare the wind and rain that we will most likely get from the storm’s offshoot.  However, if things look like they could get a little rough out there then Plan B is to rent a hotel room for the night and the girls and I will be shipped to shore to sleep there while Eben stays on the boat. The thought of Plan B, of leaving Eben alone on the boat to fend the storm, makes me slightly ill to my stomach, but we have always said that we would never put our daughters in harms way. That and we know that Eben would just be extra stressed if we were on the boat with him during bad weather as he would be worrying about us as well as the boat.
Plan C, you may ask? If tropical storm Chantal turns to Hurricane and heads directly our way? Head for the mangroves, tuck in, tie in tight, prep the dinghy, and pray for the best. But not to worry, Plan C is just precautionary…right now Plan A is in full effect. 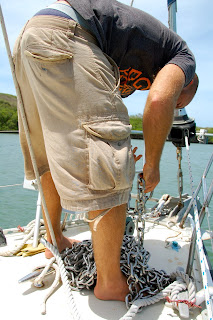 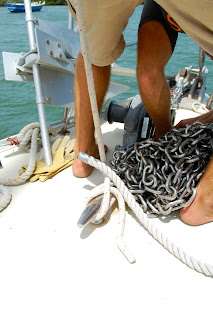 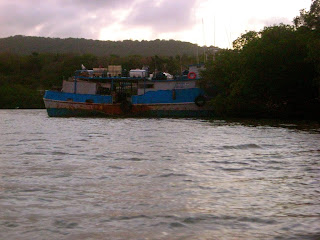