When we have internet available, I have to say that I do get a bit addicted. I like to wake up, eat breakfast, drink coffee, and see what happened in the world since I last put the ipad down. I will also check while the girls are napping, and a few other points throughout the day. Eben has pointed it out to me a few times, but I like staying connected. It is not like I go through withdrawal when we cannot connect, but when it is at hand, I will confess that it will most likely be in MY hand. I spend my online time split between the blog, facebook, emails, and looking for apps for the girls. Yes I may have a slight problem but when you are so far from most friends and family, sometimes reading a simple status, even if it is a ridiculous as what your cousin ate for lunch, it can make you feel like you haven’t left it all behind.
In both the Bahamas and the Dominican Republic we brought our ipad in to the local phone company and signed up for their 3G prepaid internet plan. This means that we have 3G internet connection even out on the sailboat. The best use we have found for this, outside of my social networking, is that when we are traveling around in land we can have internet for driving directions and the blue GPS dot on google maps to let us know where we are. To get these internet plans is generally very easy and not that pricey. The only hickup we found in the DR is that we needed a Dominican to put the plan under their name, as they needed their local ID card to sign up, but since it is a prepaid plan it wasn’t hard to convince a friend of ours to help us. The speed of it is decent enough for regular webpages, but it struggles sometimes with uploading videos or Pinterest, a conglomeration of a bizzilion pictures.
A few other boats in the harbour have gone with a local wifi provider, which is extremely cheap, but we found that even with our wifi booster antennae, and with the placement of our boat at the entrance of the bay, we are just a bit too far to make the connection worth while. When I would try and do my blog stuff using this form of internet to upload pictures to the blog, it was so slow and frustrating that made me want to bang my head on our table. I usually had time to have a full drink before anything was up on the site.
Our third option, when we have some serious interneting to do, is to go in to the local bars that have free wifi. They can also be touch and go, we are in a developing country where everything is very laid back, so you ca’t expect too much or get frustrated with the results. Also you have to take into account the amount of other cruisers that thought they would do their skyping and blogging at the same time, sucking up the bandwidth. But more often than not, the internet will be better here than anything we can get on the boat and you can actually get things accomplished faster than snails. (Even this blog was half accomplished on the boat and half in town). 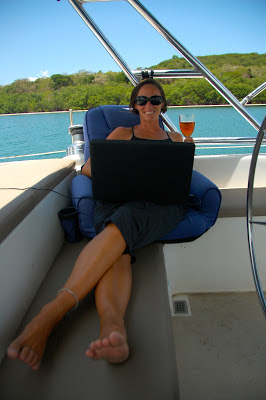