The Highs And Lows Of This Sailor’s State Of Mind

The Highs And Lows Of This Sailor’s State Of Mind 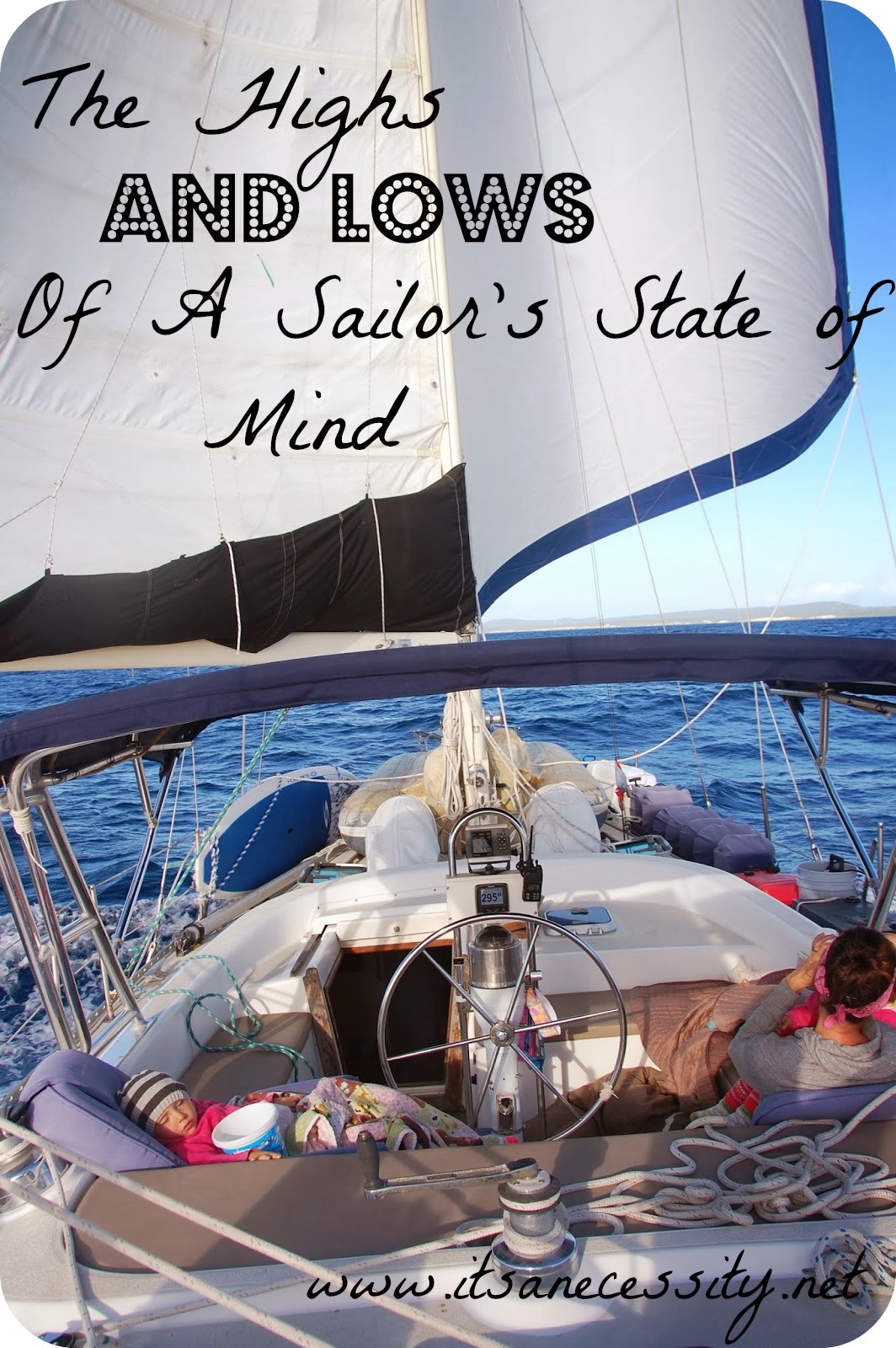 It’s crazy how boating comes with such blissful highs and depressing lows. There are those beautifully romantic moments that could be depicted in any movie as they sail away into the sunset, and then there are those other times when you just want to cry and be helicoptered off of this floating contraption. The brain can be sent into either of these opposing emotions with the slightest glitch or glee.

Yesterday I got to visit both of these extremes, all in one trip. We were sailing our boat from Vieques back to Puerto Rico. Since we were going with the wind and waves at our back we figured it would be a nice ride across the Vieques Sound and would take us no more than 6 and a half hours to reach our next anchorage. We originally had planned to leave at midnight, but when we got up and rechecked the weather the wind speeds were not comforting. After much debating and mental torment of just wanting to leave and be at our next spot vs. not feeling 100% with what the weather site was showing us we chose to go back to bed and check again in the morning. Eben woke up at 4 and saw that the updated weather was more in our favor, and so we were hauling up the anchor and heading out. The sail started off well until about half way through the Sound when the wind died and we were just getting pushed around by the waves. There were hitting us from the back and the side sending out boat into uncomfortable rolly pollys (aka.yawling). My world was being engulfed by the not so fun thoughts and all of a sudden everything seemed grim. As I held on to my baby, ridden with seasickness she felt limp and lifeless until she finally fell asleep from throwing up. I looked across the cockpit at my other daughter who also felt ill and started question why we do this and imagining the possibilities of just giving up. The sails would not fill with wind and just flapped around, laughing at me, making all the darkness seem even worse. I know we were not in harms way and nothing dramatic was actually happening, it was all a state of mind, one that amplified everything to the extreme, but it felt grim and I didn’t want to be there.

In the matter of a few hours we were in island coverage, the waves had reduced and the wind picked up again so that we could throw the sails back out. And my state of mind instantly flipped to the more positive side of the coin. Both girls had napped and had life rosying up their cheeks again. We were sailing through the water, making great time, with no sound except the wind sliding over our sails. It was blissful, and to add to the moment, a huge pod of dolphins came to play around our boat. They swam around us in circles, swooshed in with the waves, jumped at our bow, and had us jumping and yelling with joy. We all played at being seaquarium trainers, coaxing the dolphins to jump, and even tried our hand at speaking “dolphin”. They added excitement into everyone’s spirits. We were happy, we were having fun, we were sailing. This is why we do it. At this very moment our lives were full of joy and adventure. This is why we accept the prior mentioned lows. For these moments. Where you can adventure from one island to the next, moving along happily with no qualms or worries, just enjoying life. These are the highs.

The conditions were so wonderful that we decided to skip our originally planned anchorage and continued on another 20 miles to the following anchorage. Now we sit in Salinas, planning our next departure, which will be tonight, to continue moving along the Puerto Rican coast line making our way to our jump off point across the Mona and over to the DR. Let’s hope that the rest of the sailing is filled with more highs and minimal lows, because I don’t think being airlifted off the boat due to sad feelings is actually justified.