Did We Break The Boat??

Home/Did We Break The Boat??
Previous Next

Did We Break The Boat?? 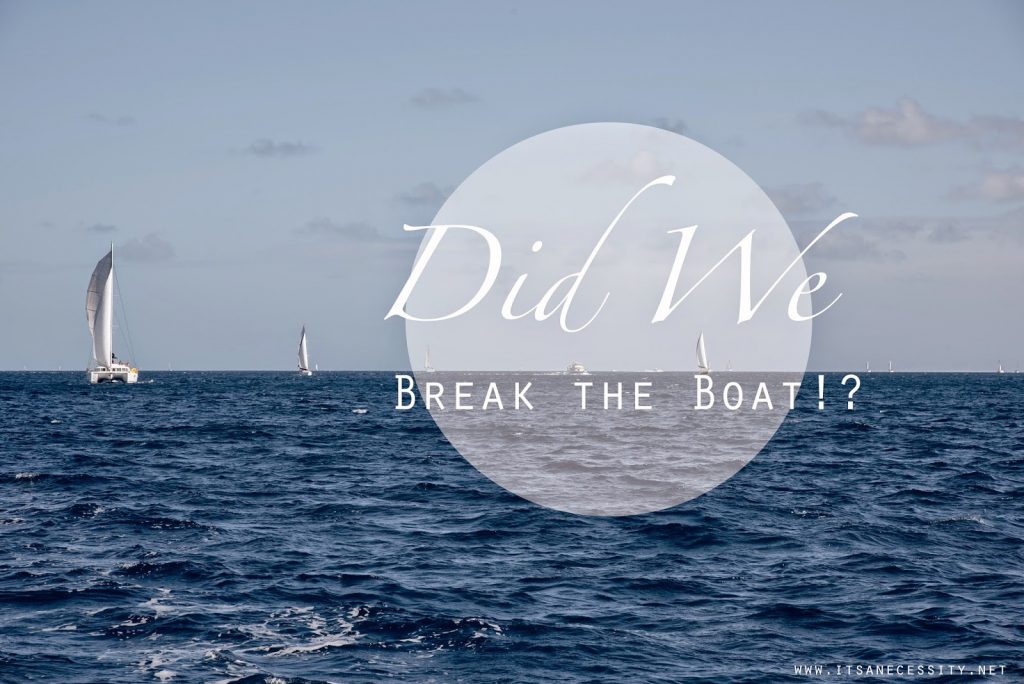 After my first sail, which was a horrible nightmare of a way to learn to sail, Eben and I made three rules regarding our sailing that we promised to follow from that point on. These three things were pretty basic, but we figured by following these we shouldn’t run into the same issues we had on my first crossing.

The rules were:
Never sail with a timeline.
For longer passages we will seek out a third adult to help us crew
If we think that something should be done, we do it right then and there, rather than wait for a later time.
Our last 5 years of sailing we have been very good at doing these and it has saved us numerous headaches I am sure. Until last week.
In our defence, we are pretty new to this whole “towing the dinghy behind the boat” while sailing thing. We are used to longer crossings and we would always haul our dinghy up on deck. But in the Virgin Islands all the islands and bays are so close together that there is no real point in going through the pain of lifting that extremely heavy dinghy up just to have to put it back in the water an hour later. So, we have started doing like everyone else and towing it behind our boat.
Last week we were anchoring just off of Sandy Spit, Jost Van Dyke. We found the spot we wanted and were getting ready to drop anchor. That when I asked Eben, “Should we pull the dinghy up along side our boat?” (This is where we broke our rule, I thought we should do it, but instead we thought, “we’ll be fine” and left it where it was, tied behind the boat.) We dropped our anchor and Eben decided to go dive since we were in a spot with a bunch of coral and we wanted to make sure it was set properly. As he was floating over it he gave me the “OK” to back up on our anchor to dig it in. I started slowly at 1200RPM, and as I do this I hear our dinghy line pull tight and then our engine just stopped. It shut off, all on its own. NOT GOOD! There was no boom, no cracking sounds, just off.
I called Eben back to the boat and explained what happened. His face turned white and all he kept saying was “$#!T” (and we are really the swearing type, so this was definitely bad!). The dinghy line had gotten wrapped up around the prop shaft. Eben’s gut reaction was that we busted our transmission. This would be an extremely expensive fix and could mean the end of our sailing. My stomach was in knots. Eben dove under the boat to inspect everything. The rope had pulled so tight that I could barely get it untied for him to unravel it from below. And the wraps of the rope were strong enough that they had pushed the zinc back about an inch.
Once back on board, and clearly freaking out, Eben radioed Joaquin for advice and comfort. Joaquin assured us that if Eben was able to dive down and manually turn our prop, that our gears still worked, that we should be just fine. We just had to get the balls to turn our engine back on and try driving the boat forwards and backwards. It took us a good 10 minutes before we could bring ourselves to do it, all the while we were picturing the $ draining from our bank account. Eben checked everything three times over and then started up the engine. It started, that was a relief. Then slowly forwards, yep it worked. Then backwards, and that worked too. *insert HUGE sigh of relief*.
We hugged it out and had an awkward laugh about it (awkward because the memory was still too fresh to really laugh about it!). We knew that we would still be super nervous the next time we would have to use our engine, and that we would be listening to every little sound wondering if it was a normal one, but for now all seemed ok.
The unfortunate event two days later of our anchor dragging (for our first time ever) meant we had no choice to baby our engine, we put her to the test. We drove it all around the bay, anchoring and re-anchoring, and she worked like a charm.
We were extremely fortunate that we did not blow or transmission or break something on the boat, and we kicked ourselves for not following one of our “rules”. Never again will we do that!
By It's A Necessity|2021-03-23T09:46:46-04:00February 18th, 2015|Uncategorized|4 Comments