If Only I Hadn’t Farted. The Story Of How We Broke Down On The Side Of The Road

Home/If Only I Hadn’t Farted. The Story Of How We Broke Down On The Side Of The Road
Previous Next

If Only I Hadn’t Farted. The Story Of How We Broke Down On The Side Of The Road 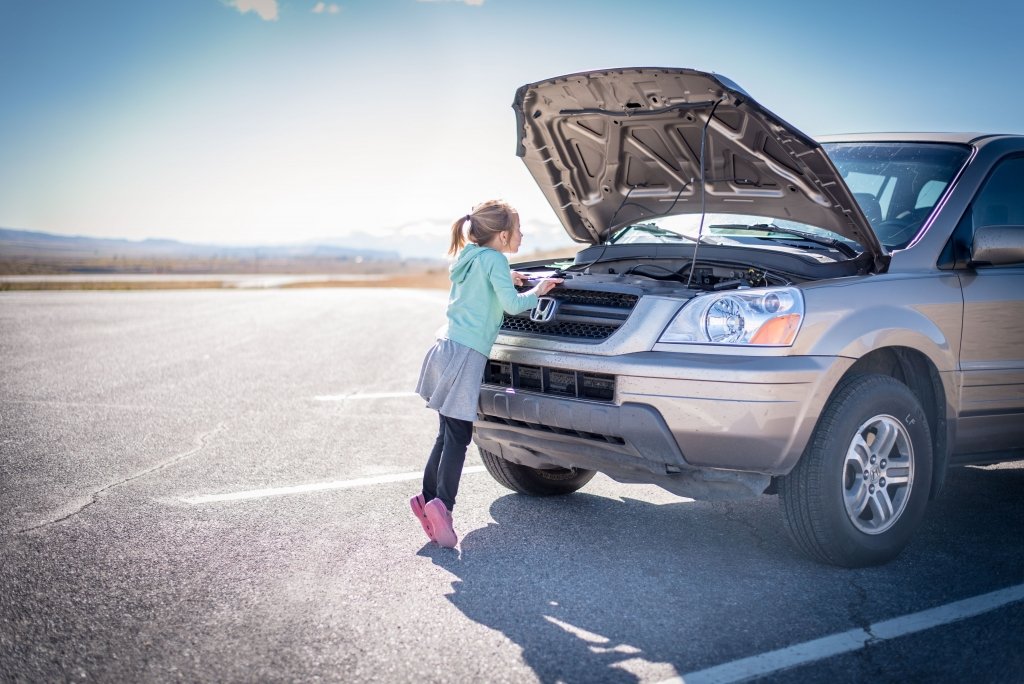 We’re strong believers of laughing, a lot, whenever we can. Laugh at yourself. Laugh at your mistakes, and laugh at the things that you have no control over instead of letting them get you down.

Today was a prime example of an uncontrollable situation, where all we could really do was laugh.

We broke down, in the middle of nowhere Montana, with no cell reception.

After the hurricanes throwing our plans out the window, we made new plans. Buy a “new to us” SUV and drive it down to Todos Santos, Baja Mexico. We had always planned on heading that way, but thought we’d be in the islands for a bit first, and then fly there. But a road trip seemed like a fun way to get us to our final destination. We also needed to buy a vehicle for our life down there anyways. Two birds, one stone, and a week of driving through the US and Mexico.

While in Canada we spent three days looking at different used vehicles, bought one, got new tires on her and took off. The plan: Montana, Idaho, Utah, Nevada, California, and down into Baja.

Our first two days went great. We left Edmonton and convoyed (with both our cars, one to be left there) towards Rosebud. A good chunk of our family lives there. We got to spend one more night with the gang, which was nice because we may not see them till next summer. 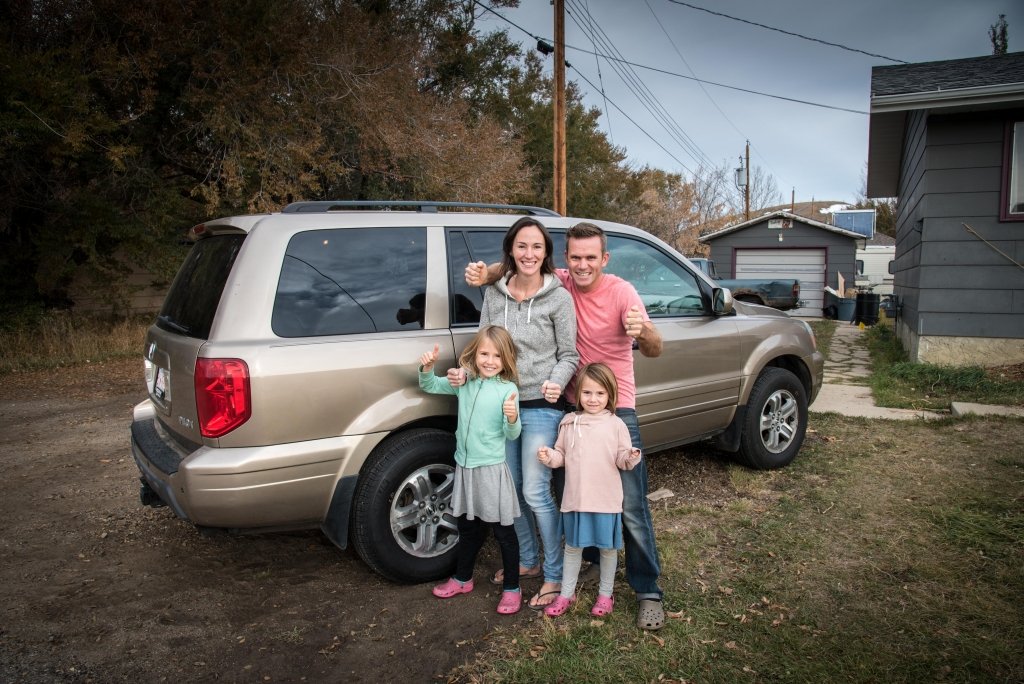 Day two we packed up our SUV and headed for the Canadian/US border. That drive went perfectly as well. We only had a couple minor, and funny hiccups. Like Eben being questioned at the border as to what he had been doing in the Middle East. It was a layover he had in Egypt on his way to do Ngalawa race in Tanzania, explain that one!

Eben was keen on getting an early start on our third day. We were going to book it through the rest of Montana, all of Idaho, and aim for Zion, which is near the southern border of Utah. We were hoping to make some tracks.

And this is where we have to laugh.

Our family seems to be extremely gaseous. On road trips it gets especially bad when we are all confined to a vehicle. I, being the lady of the family, usually try to hold them in. But this morning I couldn’t. I farted and it was bad. The whole family burst out laughing (I don’t fart often) and we rolled down every single window and opened the sunroof. 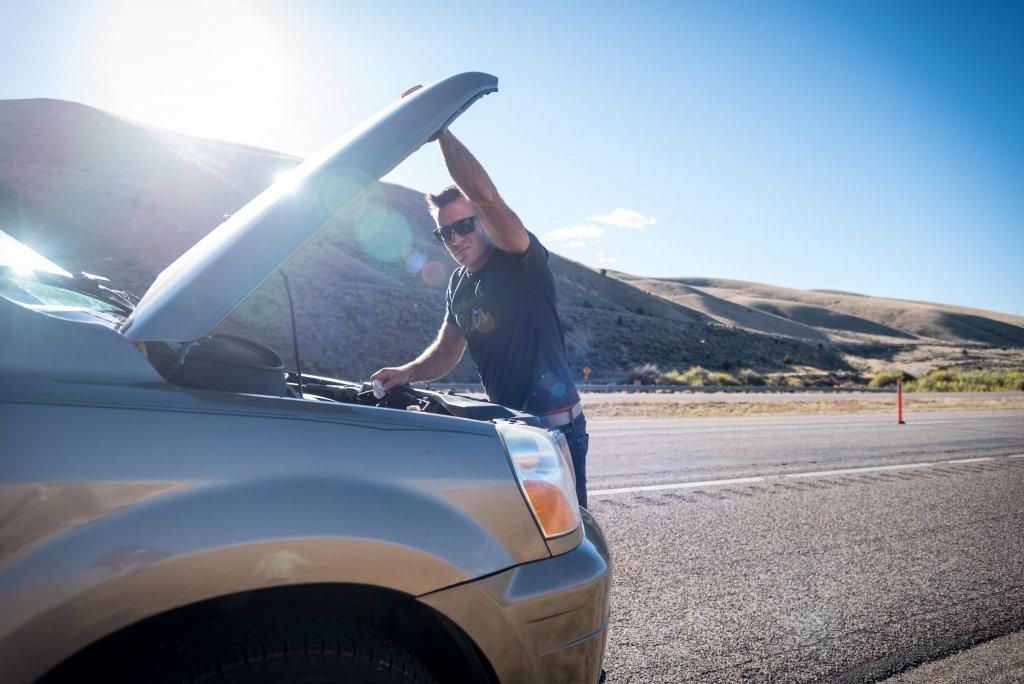 Then our battery light came on. Then our car started chugging, and we immediately pulled over. Eben checked a few things, all seemed “normal”, so we hesitantly turned it back on and hit the road again. No more battery light, no more chugging…for about 5 minutes. Then it all happened again. This time when we pulled over and shut the car off, and of course it wouldn’t turn back on.

After a few failed attempts at flagging someone down to boost us, Eben started walking to a nearby house to see if they could help. A nice woman saw him walking up the road and came and boosted us. The car was running, but we were in the middle of nowhere with what we assumed was a faulty battery or a faulty alternator, with no mechanic nearby.

We said a little prayer and hit the road again hoping we could make it to the nearest with no issues. 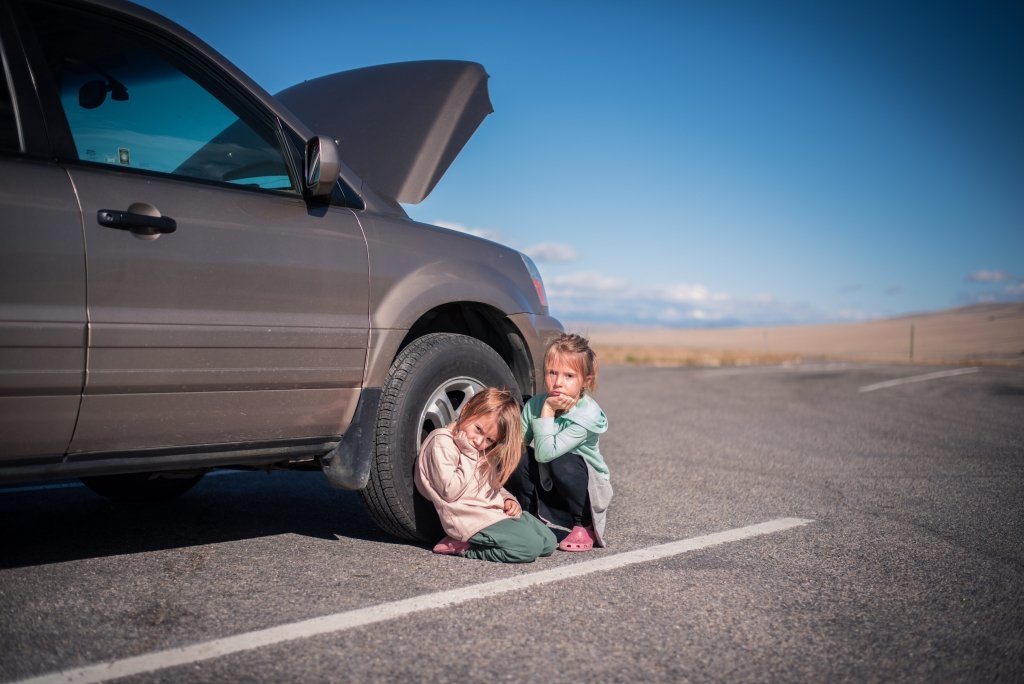 5 minutes later the light was back on and the car was chugging again. Then every single warning light started clicking and going crazy. Luckily for us there was a roadside turnout just up ahead. We crawled into the parking lot and went seeking help from every trucker and vehicle around. No one had cell service. No one had a spare battery.

But again, as luck would have it, Eben noticed a boating and hunting inspection station was set up across the highway. He walked across and with the help of some hunters (one who had a phone book!) they got reception on one guy’s cell and called a mechanic in a town 25 miles behind us. This awesome mechanic man bought a battery for us. He drove it to us at the roadside stop, and now we are following him back to his shop to fix our alternator. 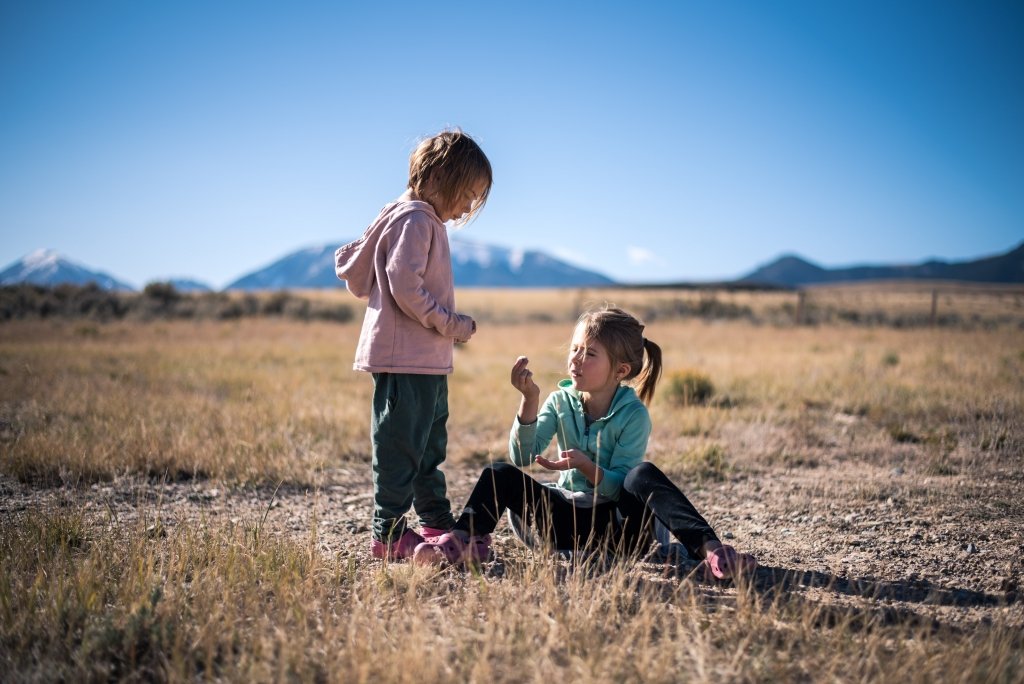 In the two hours that we waited roadside and Eben got this all figured out, the girls and I played outside, played 20 questions, played Uno, and ate most of our stores of snacks. When nap time neared, I told the girls to rest and I lay my head down too.

While I was half asleep I cracked up laughing at the thought, IF ONLY I HADN’T FARTED! Then we wouldn’t have rolled down (and up) every window. And then maybe our battery would’ve last us until the next big city. This may have saved us the 2 hours on the side of the road, the backtracking 25 miles to the mechanics, and maybe some money.

But now, all we can really do is laugh. I farted and broke our car. What would a road trip be without some car issues to spice it up! 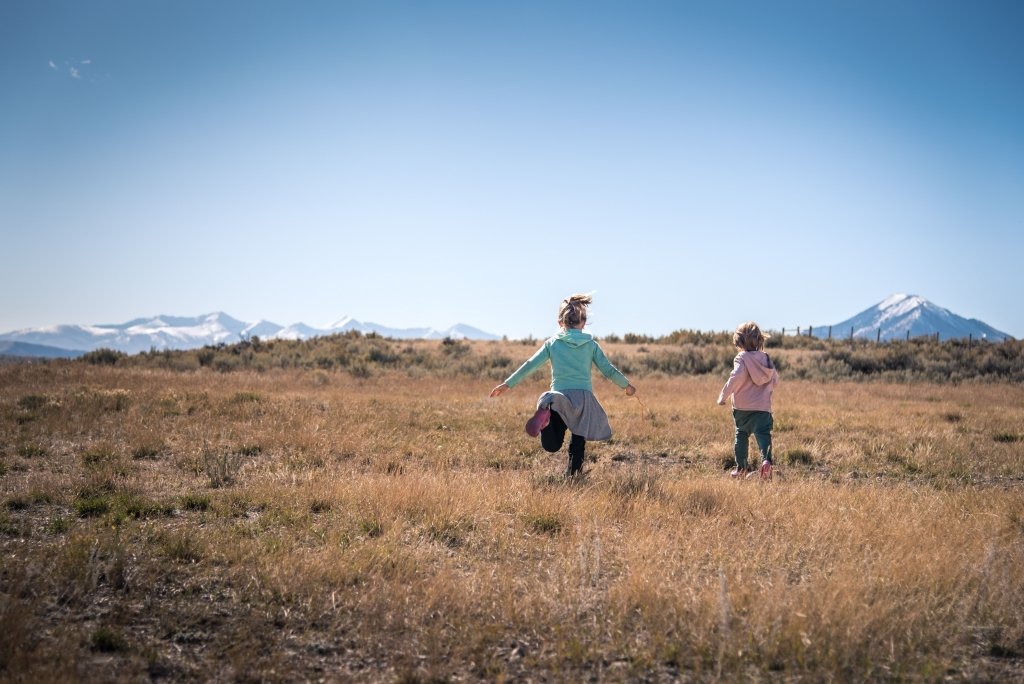