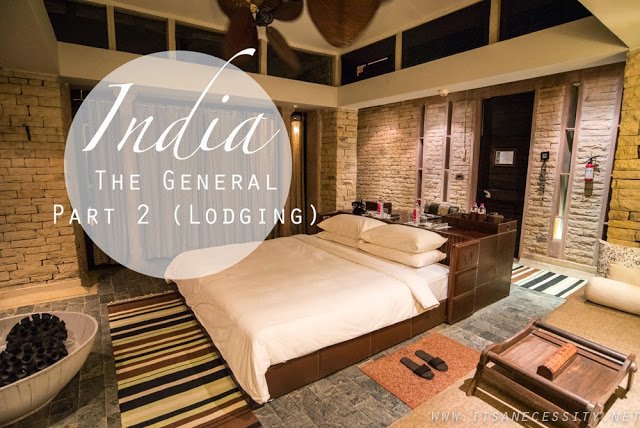 It is not recommended to drive the rickshaws at night. Already that driving a rickshaw is insane, then you throw in the organized chaos of driving in India, the last thing you want to do is try and attempt both of those while not being able to see two feet in front of you. Anyone who has done a roadtrip before has done some night driving and, usually, it is not that bad; so many people thought they could attempt it during the run (including us) but when you combine the crappy headlights that come on a rickshaw, the low-height of those vehicles, the messed up roads, the random pedestrians, and the big trucks whose headlights are right at your eye level, it becomes dangerously stupid.
We drove into the evening darkness a couple of times, either because we were stuck looking for hotels after the sun had set, or because unexpected rickshaw breakdowns caused our daylight driving hours to disappear, but for the most part we tried to make it to our final destination, with a hotel in mind, before nightfall.
In India there is lodging for every type of budget, and on this trip we got to sleep in the full gamut. We slept in everything from a palace to what we found out after was a brothel! Going West to East, here is a peak at some of our accommodations.

This place is surprisingly amazing. Geared towards the backpackers’ budget you wouldn’t expect too much from it. But this place was just stunning. It had all the character that one would want for an authentic Rajhastani hotel experience. The rooms were beautifully decorated, the whole building had ornate sandstone carvings, including the bed frames, there were common lounging spaces everywhere, and it just felt homey. To top it off they have a great rooftop restaurant where you can sit (or lay) back, relax, enjoy some tasty food, and take in the grand view of the Jaisalmer fort. 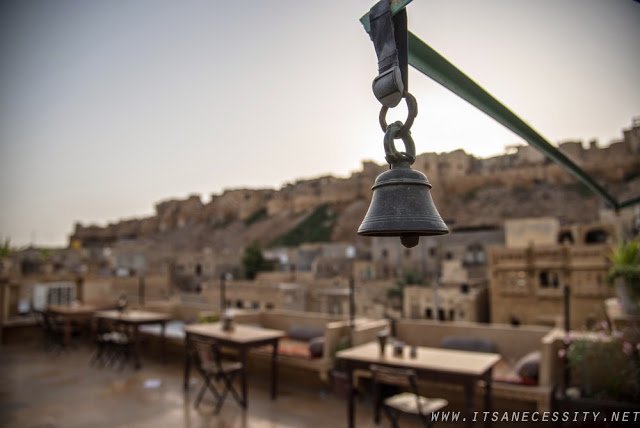 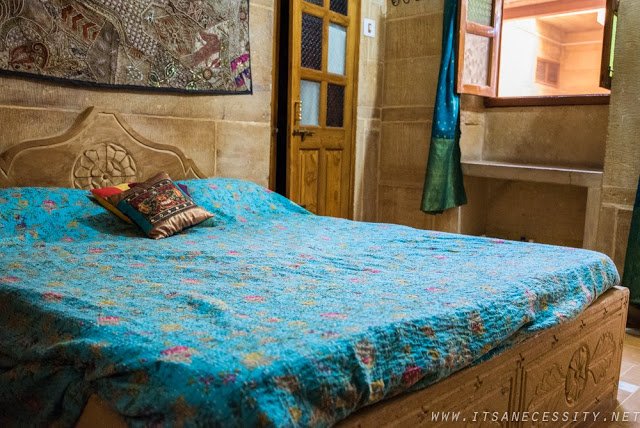 At some stops we did not have many options of where to stay. When the night had crept up on us we were forced to stop in a random roadside town, where our sleeping options were bad or worse. So we went for the simple “bad” option. When our friend Suk let them know that they were travelling with me, a white, foreigner, female, he cringed a little.The rooms had western toilets, bucket showers , and questionable bedsheets. It wasn’t until the next morning we found out this was because the “hotel” was most likely a brothel. I was glad we had chosen to sleep on our turkish towels rather than the provided bedding.

The rooms here ranged from beautiful and gorgeous. They were spacious and decorated with the perfect India touch. One of the most mesmerizing parts of this hotel were all the vines that dangle from the rooftop restaurant, down the 4 storeys, to the first floor’s open aired courtyard. Each floor also had couches and swings to relax on. And if you want a hotel with entertainment, this is it. Get up with the sunrise and you will most likely see the swarms of monkeys that come to play in the vines and run a muck on the hotel grounds, knocking over plants and jumping around staircases. 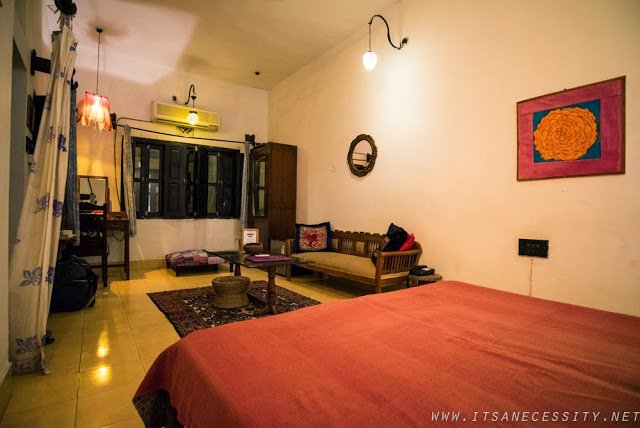 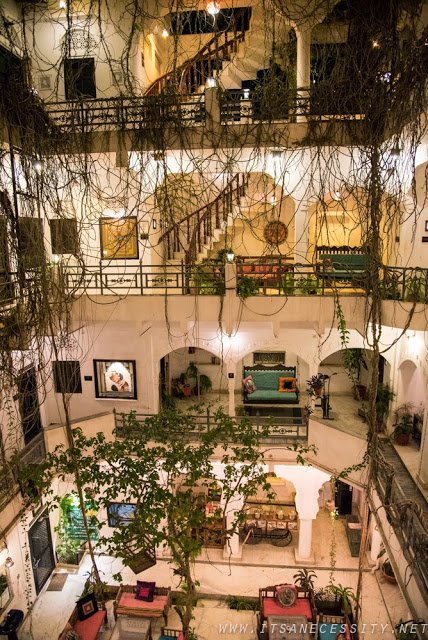 Many nights we stayed in “hotels” that weren’t really noteworthy. They often came with two beds (which Eben and I would push together), some had hot water, a basic tv and satellite (with endless channels of bollywood playing), and all had western toilets. The costs for these types of rooms were anywhere between 800-1300 rupees ($13-$21). This was standard, you could find cheaper as you could also find more expensive, depending on what you were looking for.

This place was heaven. It is not a hotel, nowhere close to that. It is a grouping of 11 cottages, a dining room, a swimming pool, a salon, and an office, on 2 acres of land neighbouring the National Park. When we arrived, at 10:30pm they had about 10 staff waiting for us in the parking area, waving us hello as we drove in. Then our luggage disappeared to our cottages, and we were ushered to the dining room where a delicious three course meal was prepared for us, at 10:30! The staff is amazing, making sure that EVERYTHING is to your liking. You truly feel like you could ask for the impossible and they would find a way to make it happen for you.
The cottages are dreamy, absolutely over the moon fabulous. Ours had a kingsize bed, our personal lounging space, full sized windows, a stand alone shower and a bathroom that should be found in a spa. Then you step outside to find your very own porch table and gazebo. This was the best sleep we had our entire trip, the beds just swallowed us up. Every detail of this place was perfect, and I told Eben that when we decide to build our own home, I want mine to look exactly like this. They thought of everything, even to go as far as to have the shower come loaded with a sugar scrub that smelt as good as it felt, and melted away all the aches we had from driving our rickshaws. We didn’t want to leave and we actually took the next morning off of driving so that we could lounge by the pool, drink some mojitos, and savour every part of this experience. (Is it wrong that one of our favourite memories of our trip to India is that of the Pashan Garh?! It was that amazing.)
As we sadly packed up our rickshaws to hit the road once again, the chef showed up with two bags of packed lunches for us so that we wouldn’t be hungry while driving. Talk about service. With this last act of amazingness the Pashan Garh easily became my favourite “hotel” experience ever. 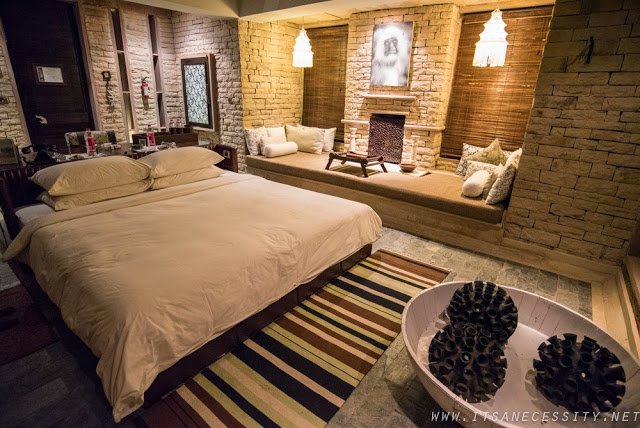 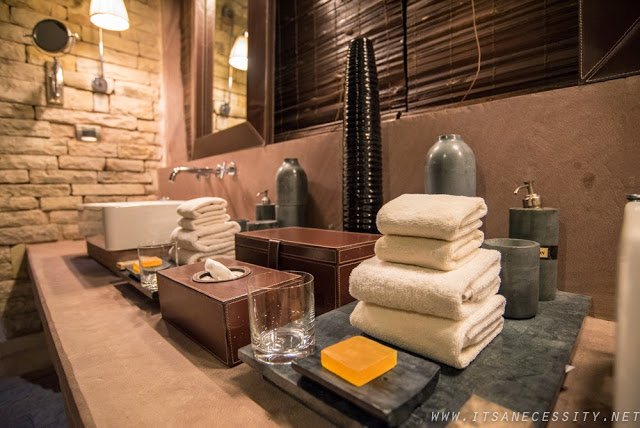 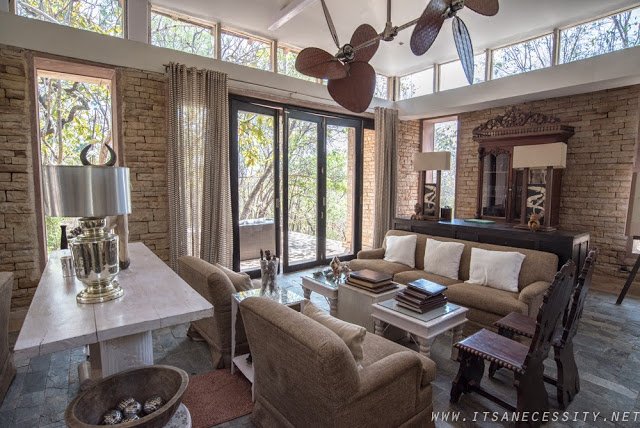 If you plan to do the rickshaw run, and this is assuming they keep their same location for the finish line, then this hotel is a great location to sleep in. The hotel is a 5 minute walk from where we had to say goodbye to our rickshaws. It is a modern hotel with western style and amenities. The lobby/lounge area has huge comfortable couches and a waterfall trickling down the feature wall. The rooms are spacious and clean, and the hotel has a choice of two restaurants, one serving breakfast nice and early. I was a great way to finish off our trip, close to all the action. 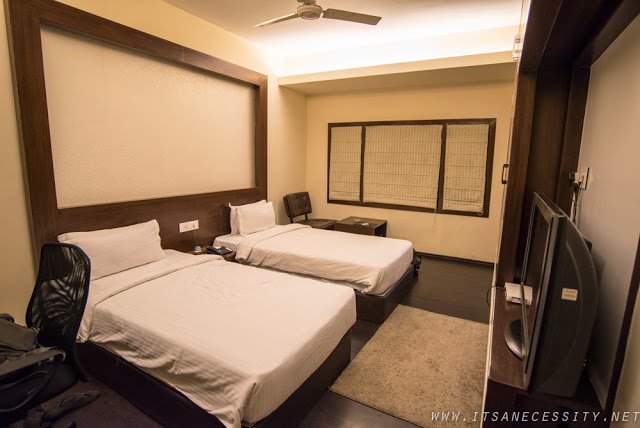 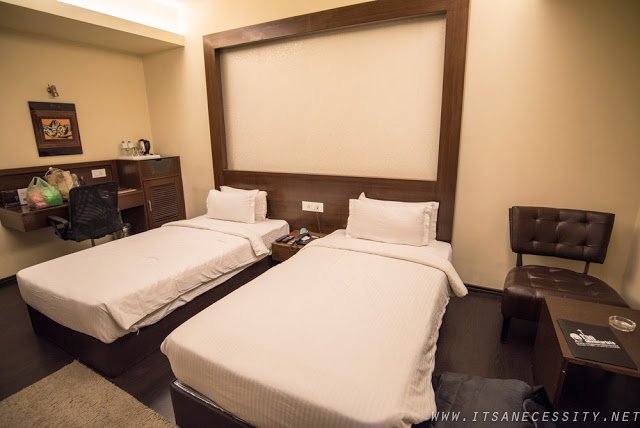 Sidenote: if you are planning to travel to India, most of the “regular room” hotels have hard beds. Eben likes firm beds, but I found this felt more like sleeping on plywood. So be prepared. I spent a few nights sleeping on top of our rickshaw mattress on top of the regular bed!