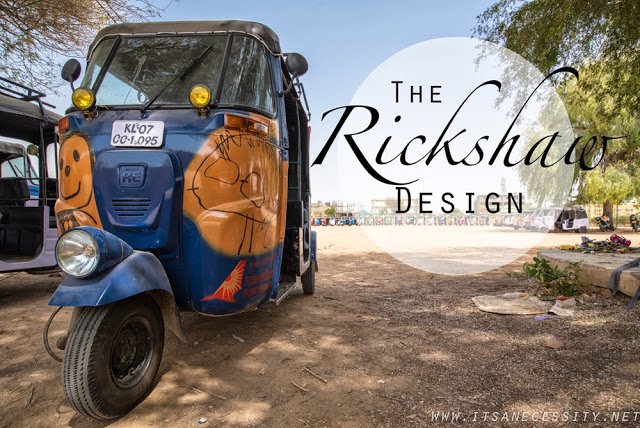 A few weeks before we set off to India we received an email from the Adventurists letting us know that it was time to design our rickshaw. They sent us a very basic outline of the vehicle (I think it was hand drawn) so that we could fill in the blanks to our own desires. Once they received it back on their end they would hand our beautiful design over to some extremely talented Indian artists that would attempt to recreate it on to the real thing.

We had no idea how we wanted ours to look, so we put all the power in our two little ones hands’ and let them design our rickshaw for us. This way whenever we saw our three-wheeled vehicle we would think of them. The girls made some awesome drawings of our family (Arias drew herself and me, and Ellia drew herself and Eben). We transposed their pictures on to the front and sides of our rickshaw and then added an actual picture of them both on the back. We also included some of our sponsors on all four sides.
It was surprising how well the artists in India did at recreating what 84 teams had dreamt up for their rickshaw designs. Ours was obviously not that hard to do, given that a 3 and 5 year could draw them first, but there were some pretty intricate ones and some pretty unique and witty designs. We did find that the painting of our daughters’ faces on the back of the rickshaw looked slightly demonic though, but it made for some good laughs to be had by all, especially when we told people that that painting is the spitting image of them, when they will be in their 70’s!
By It's A Necessity|2021-03-23T09:46:45-04:00May 22nd, 2015|Uncategorized|0 Comments