Travelling To Argentina Without Our Two In Tow

Home/Travelling To Argentina Without Our Two In Tow
Previous Next

Travelling To Argentina Without Our Two In Tow 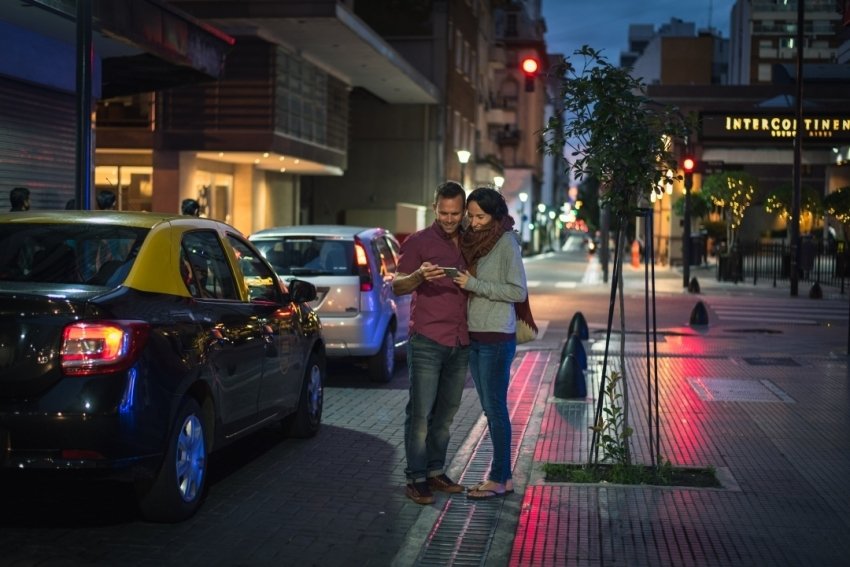 There isn’t much I can tell you about “the sites” on our Argentina trip that you wouldn’t be able to find on 100 other travel blogs, so no need for the day-by-day playback. But I can say that travelling without our two girls made for a totally different travel experience than we’re used to.

For the past 9 years we have been travelling with the kids. The only times Eben and I have snuck away for an overnight were 1) a three-day trip to Las Vegas for Eben’s birthday. 2) a three-week trip to India to do the Rickshaw run. 3) a two night stay in San Jose del Cabo for our 10 year anniversary, and 4) this two-week trip to Argentina.

That’s about 40 nights away from our girls over the course of 9 years of having children.

We love travelling with our girls. We love the lifestyle we lead. Those 40 days without them we missed them so much, but they were also refreshing and completely different from our norm.

Losing Our Minds (and Stuff) Without The Kids

When we went to India we let loose. Not in the crazy sense. More like, we lost our minds, and stuff. Usually, when travelling with the kids, we’re on it. When we get up to leave from somewhere we do a scan to make sure everyone has everything they had arrived with. Coats, check. Bags, check. You get it.

In India Eben and I were losing things left and right. It’s like we had never travelled before! We lost his ukulele, our camera’s eyepiece (twice), and a jacket (which we recovered). But man had we ever lost our travel street-smarts. It’s like without the kids we felt no responsibility, not even to our things.

This time around, in Argentina, we did way better. I don’t think we lost anything! We obviously learned from our last trip. 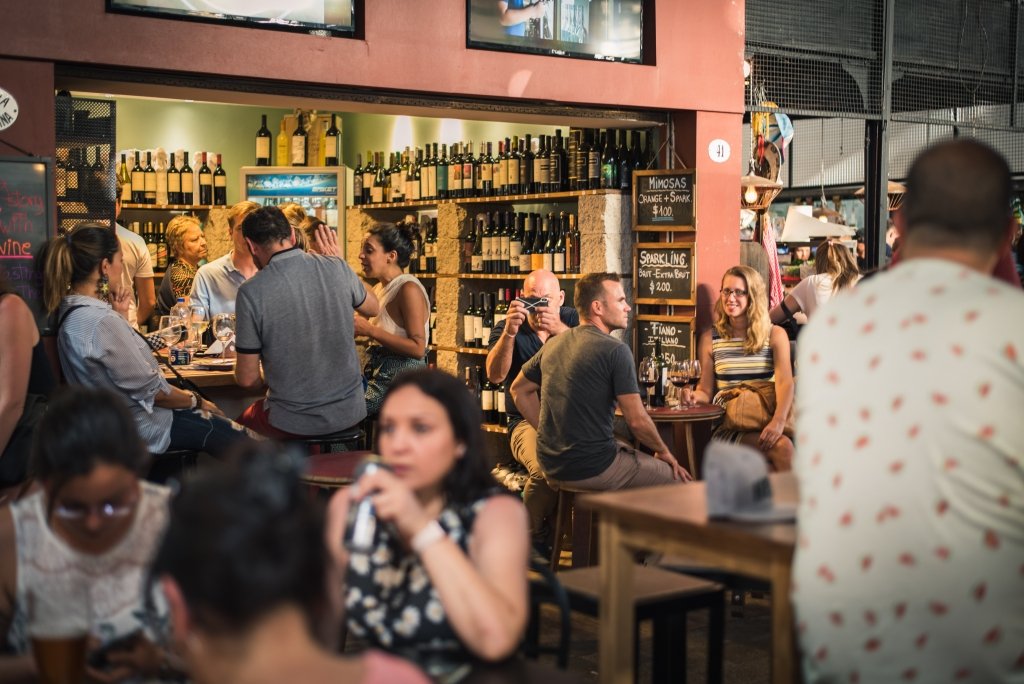 We loved our time in Spain last year. But we did feel like in our short time there we missed out on some of the nightlife culture due to the girls’ bedtime. Our girls usually go to bed around 8pm, which is about the same time most people in Barcelona were sitting down for supper!

Argentina gave us that nightlife opportunity. The Argentinians are pretty much on the same meal schedule as the Spaniards. On our two-week trip it was rare that we would sit down for dinner before 7. (A lot of restaurants didn’t even open until 7:30pm!)

Given that we were there during the summer, the sun was out until 10pm-ish. So we didn’t feel like we were eating super late.

With the late night meals also came the joy of slow eating. When not on the girls’ bedtime schedule, who cares how long it takes to eat supper. We could happily sit and enjoy way too much meat and wine on a non-schedule. That was quite blissful. 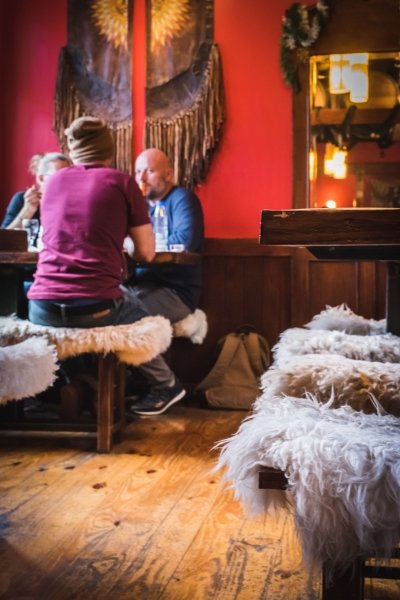 To be totally honest I did whine about the cold a fair bit, but I’d like to think that my whining is less annoying than that of two kids!

Our girls are amazing travellers, but they are just kids and still have their whiny moments. But this trip we were free of that.

Long airport line ups, who cares. We actually showed up to the airport way late 2 out of 3 times. Maybe we do better travelling with the girls and getting to the airports 3hrs early, rather than 45min before departure.

Hikes that are longer that 2km, we can crush that. Our girls can hike, but Argentina has some epic hikes. Some that we did left me huffing and puffing and needing breaks. I can only imagine how long those would’ve taken if we had the girls with us. 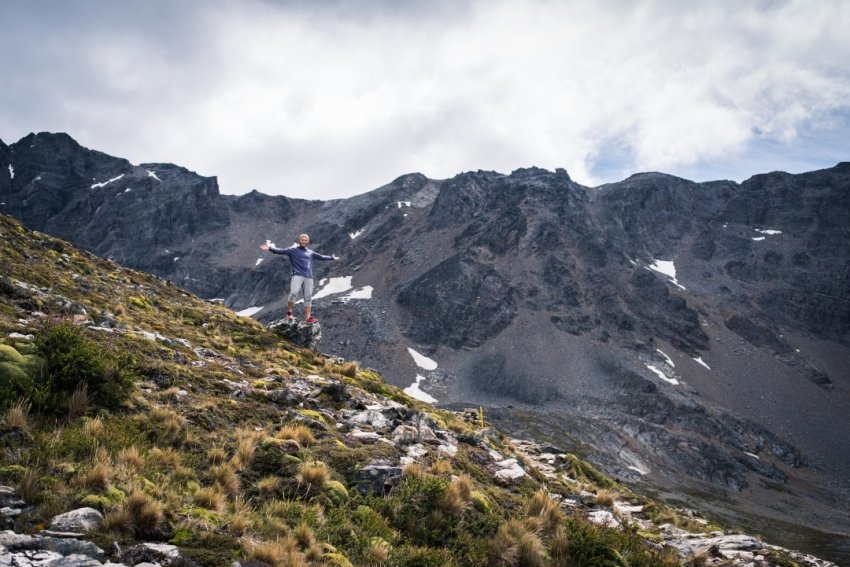 We’re lost, that’s OK, we can laugh about it. We actually got lost twice on one hike which had us scrambling through some pretty hard terrain that I would not have wanted to do with the girls. 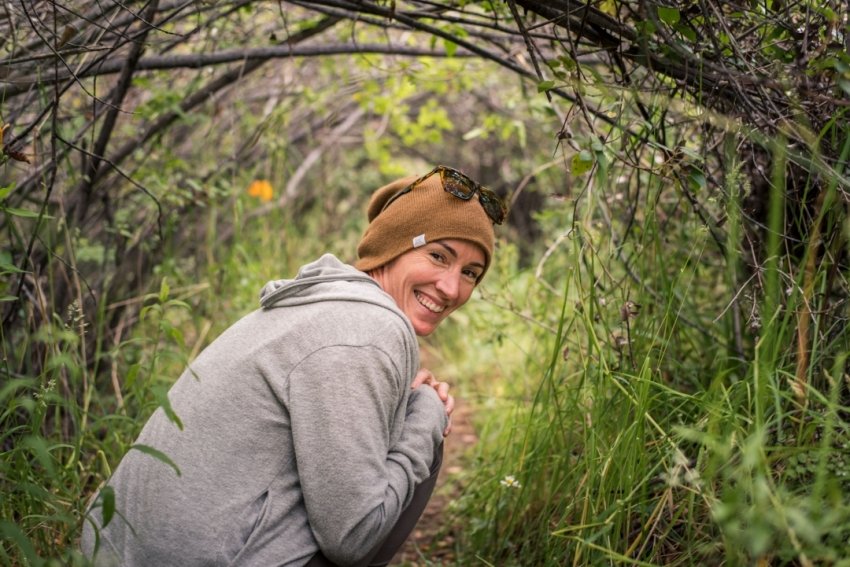 Walking the towns for hours on end, yes please. Eben isn’t much of a “let’s go for a walk” type, but he endured them with me this go. Maybe it’s because we could go where we wanted, for as long as we wanted, and stop for wine breaks whenever we wanted! That changes the pace a little. 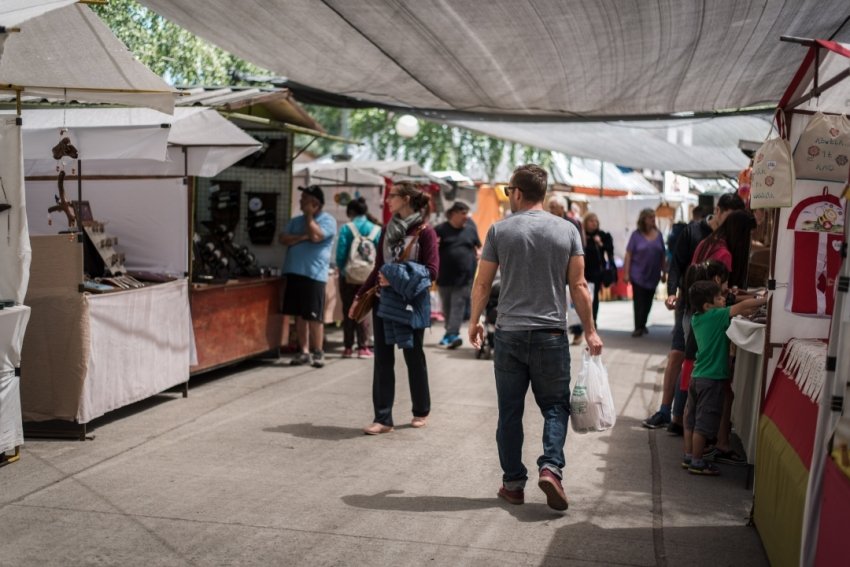 This entire trip was a surprise that Eben organized. As my final surprise we had two of our friends waiting for us at the airport in Buenos Aires who would be our partners in crime on this trip.

We got two weeks of uninterrupted adult conversations. Staying up until all hours of the night. Talking and not having to keep in mind what little, curious ears were eavesdropping. Which was good because I found out I swear a lot more when I’m cold!!!

Not only did we get these adult convos with our friends, but two weeks without the girls gave Eben and I time to connect as a couple. I mean we hang out daily and have lots of alone time together (while the girls are at school or in bed for the night), but on this trip it felt like we were back in our dating days, just him and I. We could’ve gone anywhere and it would have been amazing for this fact alone. 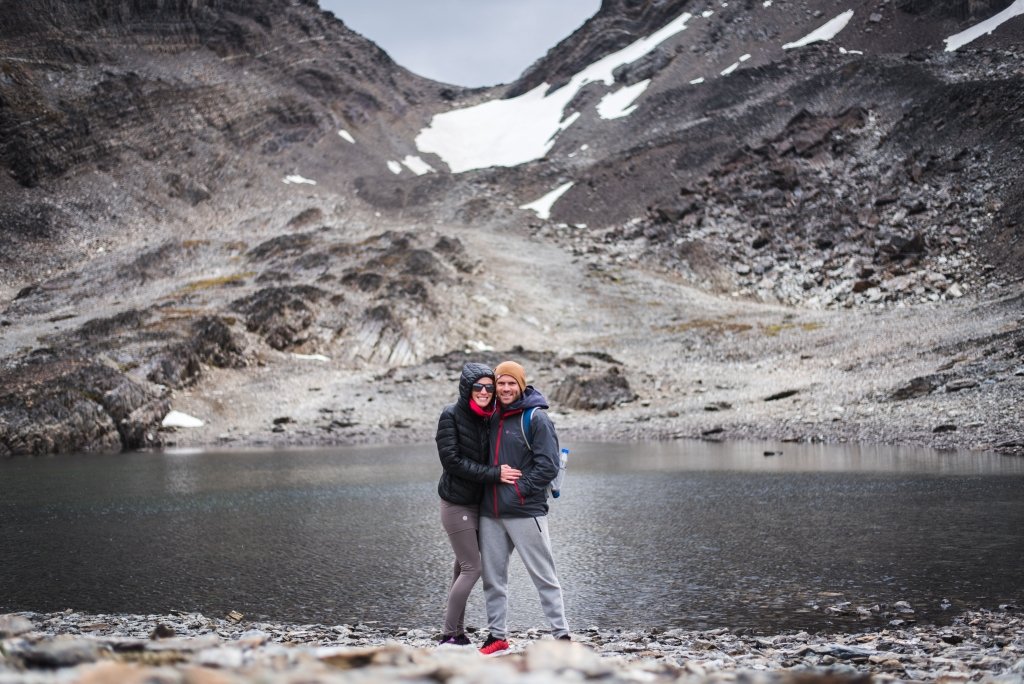 Being The Least Prepared Travellers In Argentina

Although we’re not huge planners when it comes to our trips, when travelling with the kids we at least have some idea of whats going on. We have a responsibility to keep them fed, sheltered, and dressed!

This trip to Argentina was completely unplanned. Eben had organized to get us there, everything else was “as we go”. Neither of us researched Argentina before going, and we had no idea where within the country we would be travelling on our two-week stay.

This left us being probably some of the worst prepared travellers in Patagonia!

After a few days in Buenos Aires we concluded that we couldn’t be in Argentina and not go to Patagonia, so we booked flights down. The warmest clothing I had were my gym shoes, a pair of jeans, and a light sweater.

Not only were we in the southern-most inhabited town on the continent (ie right next to freezing Antarctica) but all the locals told us we had also hit a cold-snap and that it’s not usually that cold at that time of year!!! Hooray for me, I was frozen! Luckily our Airbnb host lent me a coat, we bought ourselves some socks and tuques, and had plenty of (cheap) wine to keep us warm. 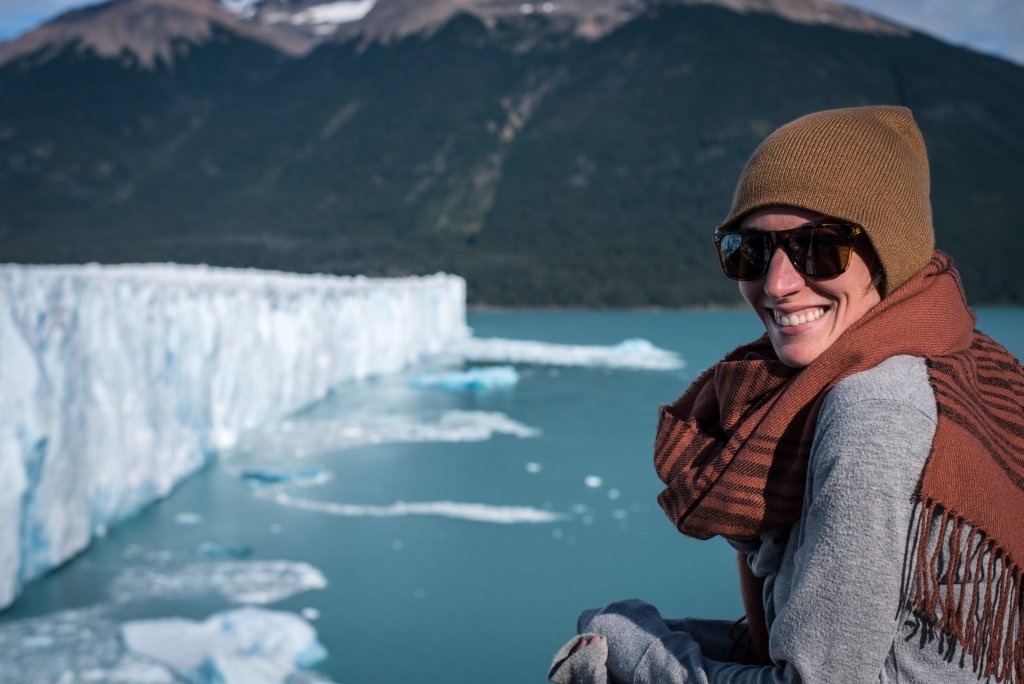 I can’t write this post about our trip and not at least mention our highlights, which each spot had.

-Buenos Aires: walking for miles through the Sunday market of San Telmo. Partying till the early hours of the morning on New Years Eve down in Puerto Madero. Tango in the streets, and the tango show we went to see. The European feel of the city.

-Ushuaia: Our airbnb cabin in the woods. Hiking to glacier and lake Margot. Walking along main streets and stopping in to the shops and restaurants. The train ride (which the ride wasn’t a highlight, the highlight is the memory we will all cherish of us all getting off the train to go hike in the National Park and deciding “heck no, it’s too cold” and racing back to catch the train as it started making its return trip back to town!) 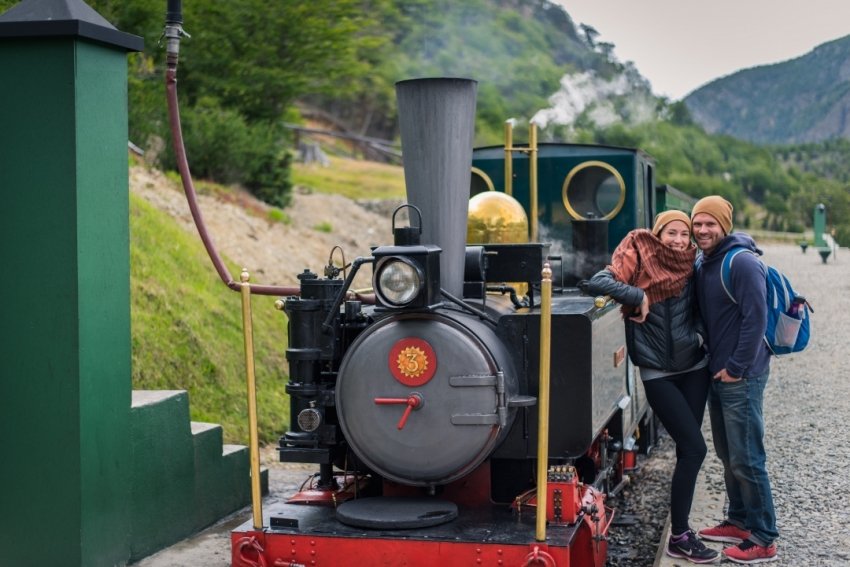 -El Calafate: Seeing a (growing and moving) glacier that left us in awe. The best lamb we’ve ever eaten.

-El Bolson: Hiking to the waterfall and getting lost twice!!! Losing our friends on the hike and being “rescued” by some locals that led us back to the bottom of the mountain. The Artisans market where we bought some souvenirs. The raspberry beer and live music at an outdoor pub that we ended up returning to three times.

-Villa de Angostura: Lunch at the marina. Time chatting at the picnic table of our airbnb cabin in the woods. Our hike up to the miradors above the lakes. Walking main street and going into every shop along the way. 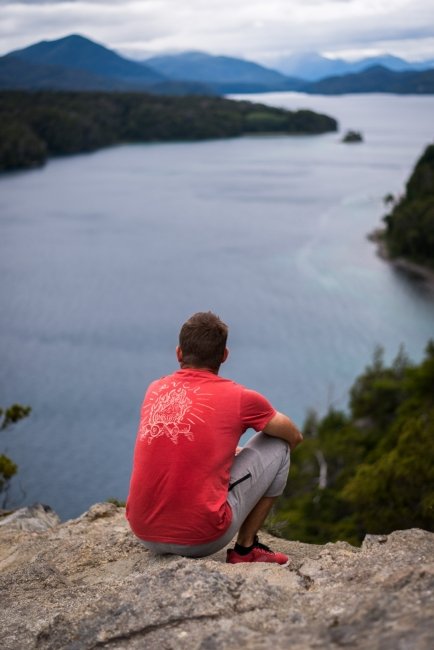 Other things to take note of:

-The areas we visited reminded us A LOT of Western Canada, leaving us with a bit of a feeling that “we’ve seen this already”.

-The artisans markets are very reasonably priced, making it so we didn’t even bargain on pricing for stuff because it was already so cheap.

AND MOST OF ALL-The meat and wine is delicious, and very affordable. It was cheaper eating “a nice meal” there than it is in our hometown in Mexico. This place is a foodies dream.

We love sharing the world with our girls through travel. And often times, during these kid-free trips we find ourselves saying things like, “the girls would love it here”. We get excited at the idea of bringing them to new parts of the world, navigating it with them, and seeing it through their eyes.

But I am definitely not against some kid-free travel from time to time, it’s good for the soul. 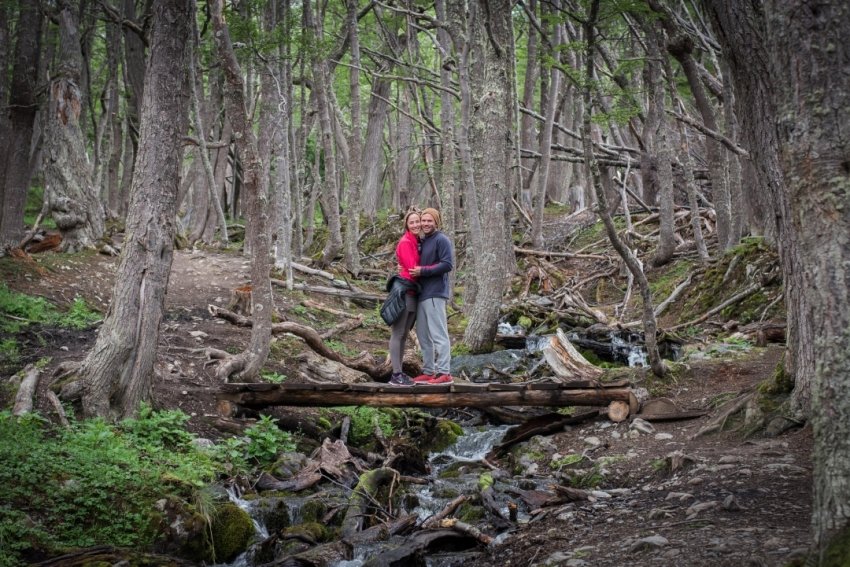