Upgrading Up In Here

Home/Upgrading Up In Here
Previous Next

Upgrading Up In Here 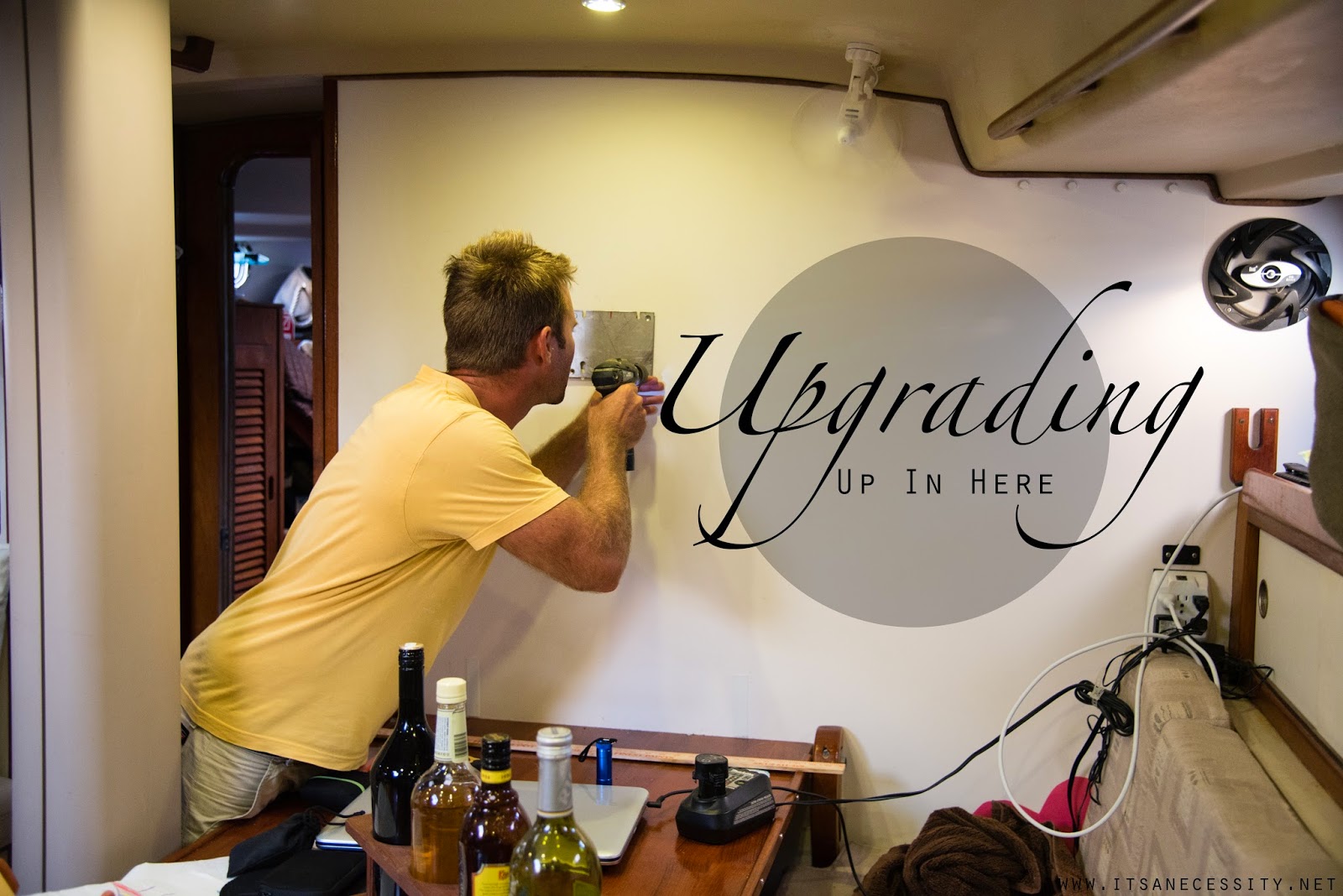 We’ve always had this big white wall in our salon that we didn’t know what to put up on it. And of course it is the first wall that you see when you come down into our boat. We had considered art, but since Eben and I can never agree on what would look good. That wall stayed bare. Most of the time it wasn’t a bother, but after taking down our Christmas decorations, and that huge chimney we had decorated that wall with, the wall felt more naked than ever. The whiteness of it gave a lack of hominess.
We lasted about a month starring at that white wall before we were gifted with something amazing. The story goes like this. We were sitting on a friends boat, admiring their flat screen TV when Eben pipes up, “you know they make 12volt tv’s now?” That’s when Carl confirmed that theirs was a 12volt and that it is awesome. Eben had been wanting one of these for a while, but we never actually put the effort in to looking to buy one online. “We have a 2nd one, do you want it?” they asked. The obvious answer, “Heck ya we do!!” But you can’t just give it away.
I guess they had bought two 12volt flat screens but realized that one was enough for them, and planned on selling the second one. But like many of us, sometimes life takes over and the smaller tasks get put on the back burner, where they stay, for a long long time. So they never got around to selling their tv and just wanted it to go to a good home. We were flabbergasted and super excited.
Finally something to put up on that big white wall! Eben custom made a mount to put it up so that it would be pretty flush with the wall, but also so that we can take it off that mount and put it on a secondary mount in our bedroom. This way the TV will be shared, in the salon in the morning for the girls’ shows, and in our bedroom in the evening for our shows. Now we’ll see how often we actually move it back and forth, but it’s nice to have the option.
As soon as we had it up on the wall, Eben and I just sat there starring at it. It makes our boat feel a lot more like a house! It is strange and awesome. And it was an amazing boat gift. This boat is upgrading, like our friend Peter said, “the boat’s worth just went up by a grand”! Now if only we could get some flooring in here it would really start feeling like more of a finished-product. Anyone want to gift us some flooring?! 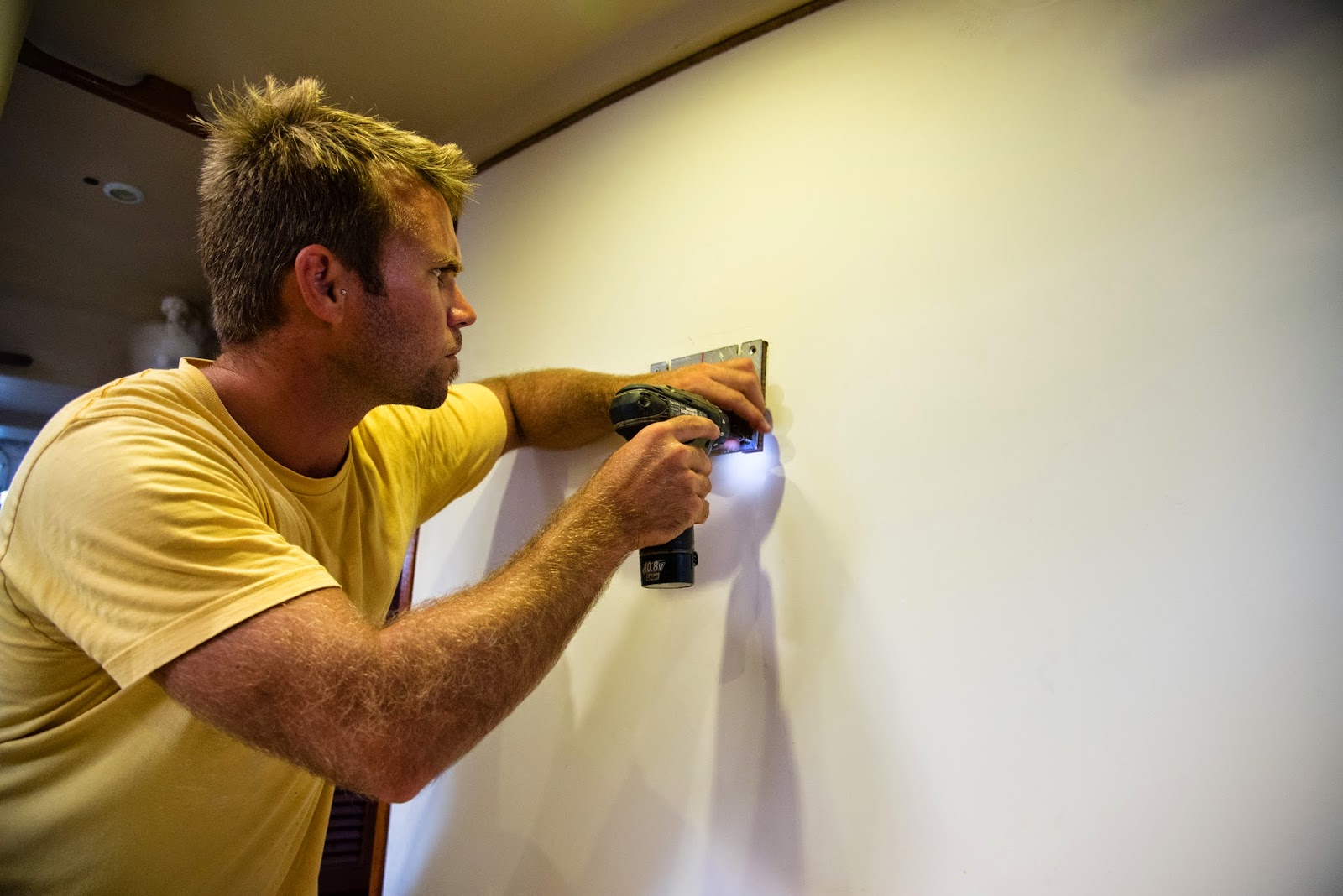 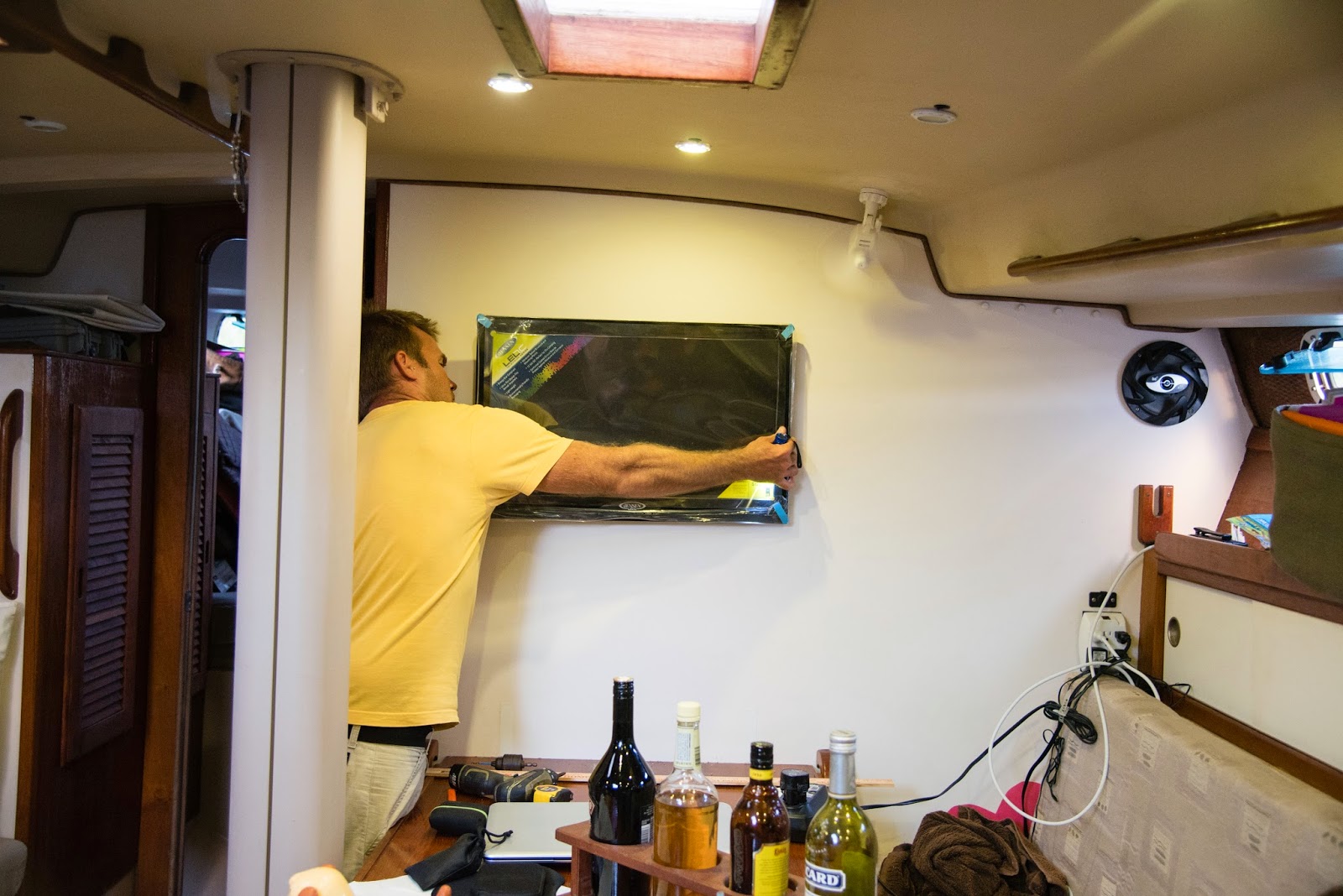 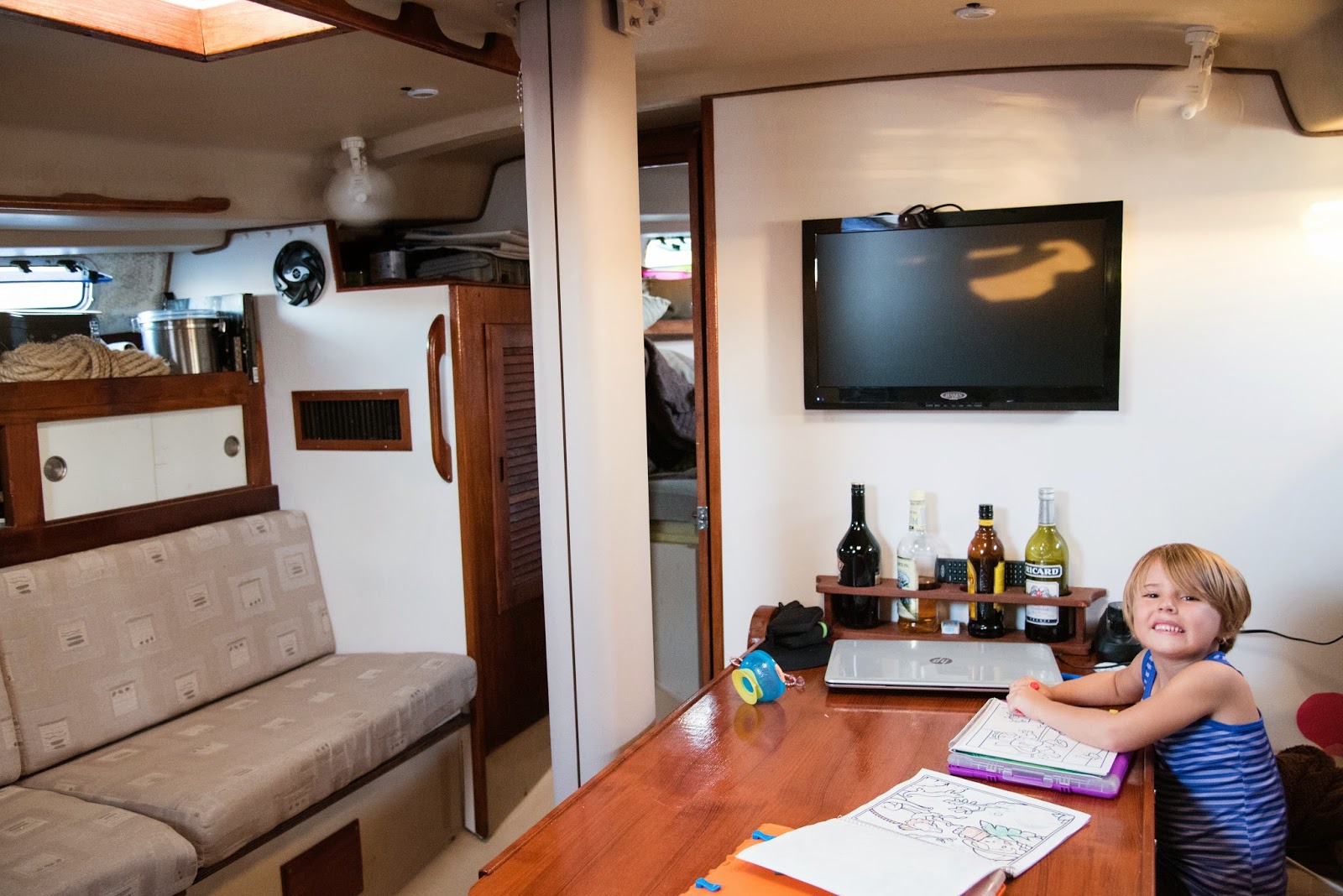 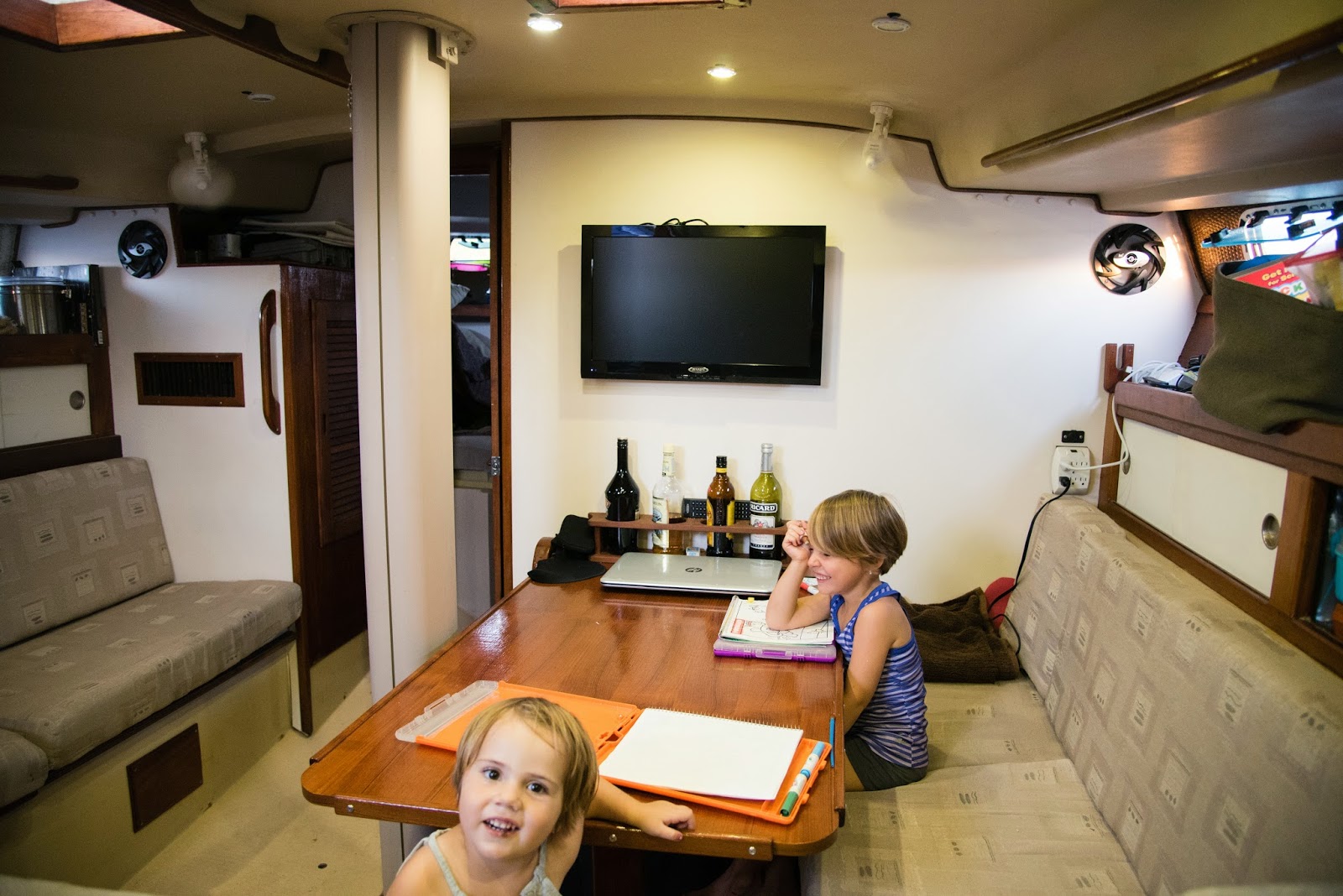